THE MOST BEAUTIFUL KITES EVER MADE

He may not have invented the kite – that was someone visionary in China with a talent for handcraft and physics around 3,000 years ago – but Alexander Graham Bell’s fin de siècle experiments with the possibilities of engineering and air currents were responsible for some of the most beautiful designs of the early 20th century.

The father of telephony had been intrigued by tetrahedral structures, how they flew, and why. He took his cue from the pioneering work of Lawrence Hargrave, the Australian aviation pioneer who developed the first box kite and whose work went on to be refined and commercialized by the Wright Brothers. Hargrave established what the properties were of using distinct cells in a kite and, through his experiments with curved wings, incidentally invented modern aviation. Bell took things further – by playing with tetrahedrons, lighter than cubes, he was able to create more lift ability and could put together arrangements of cells that were significantly less weighty than the pieces Hargrave had developed.

The success of Bell’s work in the world of aviation shouldn’t be underplayed – this wasn’t a hobby, he was a heavyweight player. He chaired the Aerial Experiment Association, formed in 1907, and personally put together three designs that were pivotal in the development of aeronautics – Cygnet I, Cygnet II and Cygnet III. The story behind them is worthy of a widescreen melodrama: Bell’s Cygnet projects were intended to carry passengers, and the US representative of the AEA – Thomas Selfridge – was his first test “pilot”. He flew in the first Cygnet, made up of 3,393 winged cells, for seven minutes above a lake in Nova Scotia. He landed safely but would, tragically, perish in Orville Wright’s experimental propeller-driven Wright Flyer a year later. Wright, who was piloting the flight, recorded his death in a letter to his brother: “Quick as a flash, the machine turned down in front and started straight for the ground … Lt. Selfridge up to this time had not uttered a word, though he took a hasty glance behind when the propeller broke … When the machine turned head first for the ground, he exclaimed ‘Oh! Oh!’ in an almost inaudible voice.”

The development of modern aviation was punctuated with tragedies, but also defined by incredible incidental beauty. Bell’s tetrahedrons were practical, but also stunning, pieces. When grounded, the tetrahedral arrangements looked like architectural interventions in progress, or land art. They are large enough for an individual to enter and inhabit, breaking up pure geometry with the human form. They are pleasingly mathematical – like a precursor of the obsessively geometric architecture of Buckminster Fuller, which was similarly focused on the power of cells. They are also a paradigm for Chaos Theory, based wholly on the idea of fractals – a potentially never-ending pattern that is identical across any scale, a simple structure and process created repeatedly in a feedback loop. Many experiments with Chaos Theory as a physical form look almost identical to a Bell kite from the start of the 20th century.

The archive photographs of Bell’s experiments in flight are remarkable. Here are structures which look like the most incredible pieces of modern art, being handled by people captured in sepia, tweed flat caps and waistcoats 110 years ago. There are elements of the obsessive and controlling hand of Bridget Riley in the images, but also of the way that birds flock together in their morphing, darting clouds. You can also see the contemporary space frame, used repeatedly in vast modern structures, from airport roofs to shopping malls. Bell was directly responsible for the look and possibilities of so much modern architecture – his key motivation was to reduce the weight of the cells that would allow flight, and those structures also work fantastically for construction – they are modular and, though light, they distribute a load evenly across a whole structure without the need for extra ground support. Even if Bell didn’t invent the kite, he elevated it to incredible heights – and it went so much further than even he thought possible. 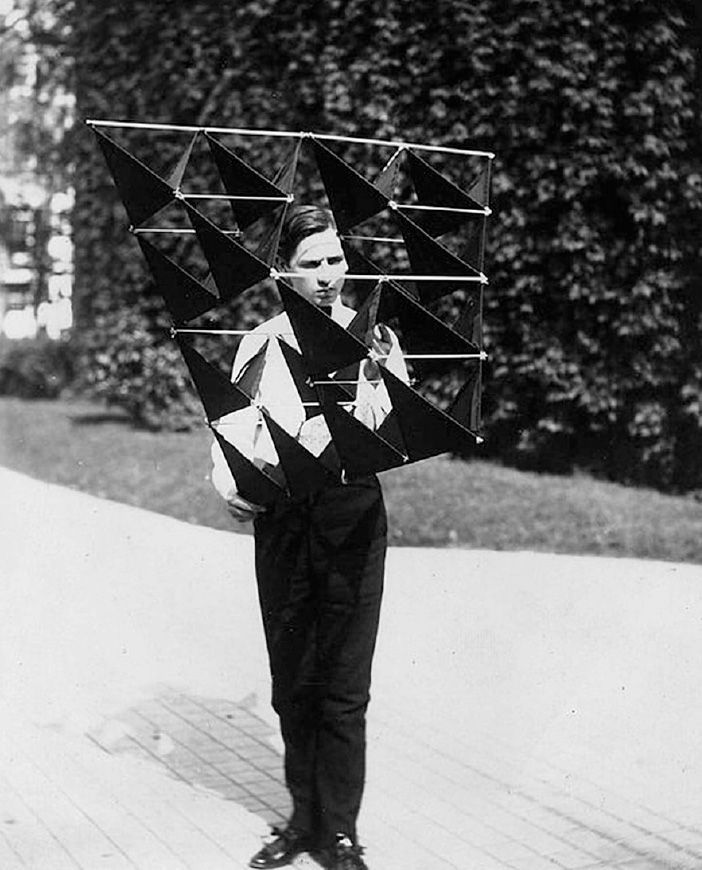 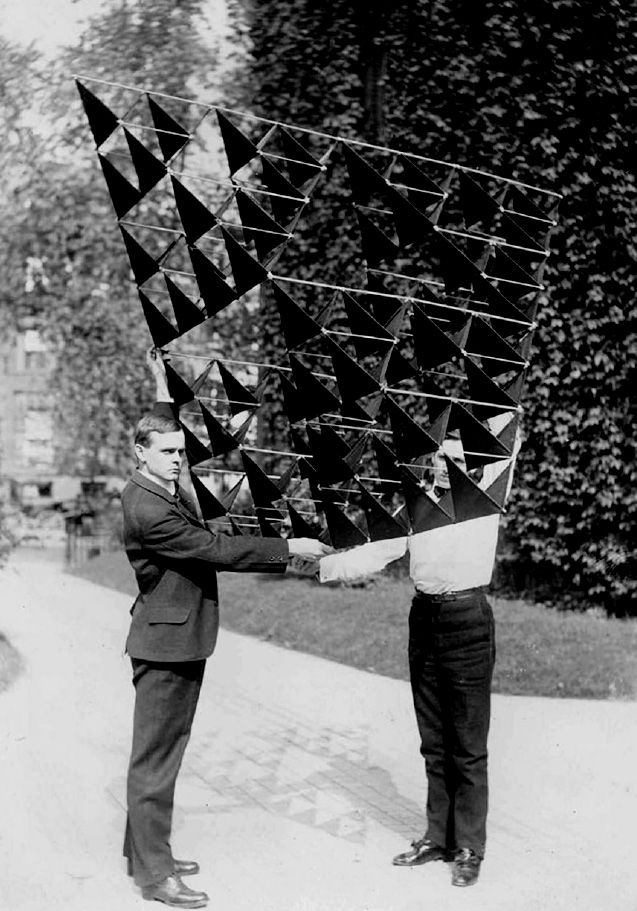 When grounded, the tetrahedral arrangements look like architectural interventions in progress. 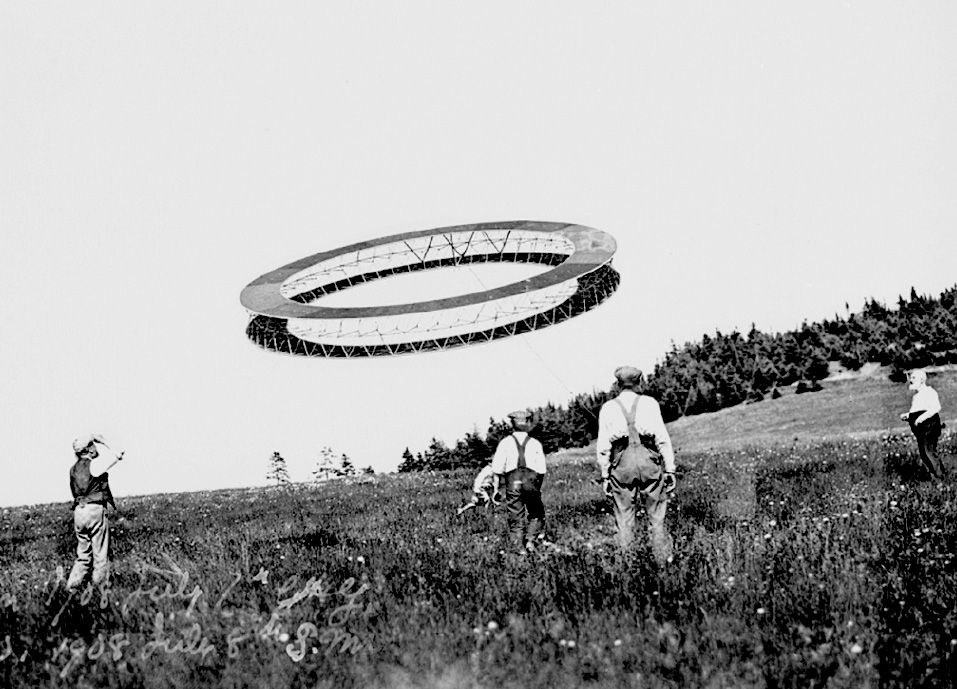 One can see the contemporary space frame, used repeatedly in vast modern structures, from airport roofs to shopping malls. 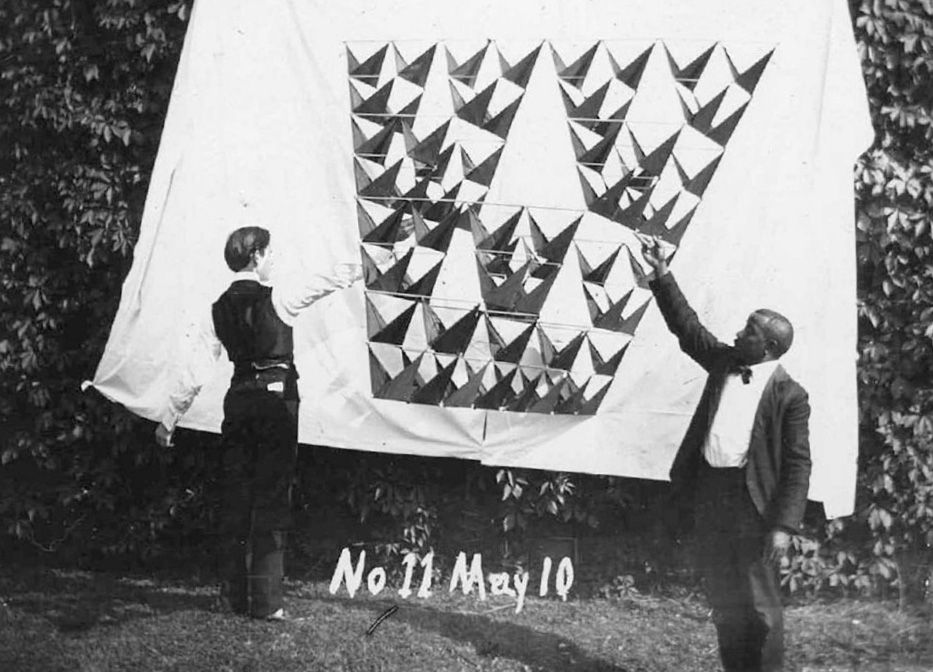 The kites are a paradigm for Chaos Theory, based wholly on the idea of fractals. 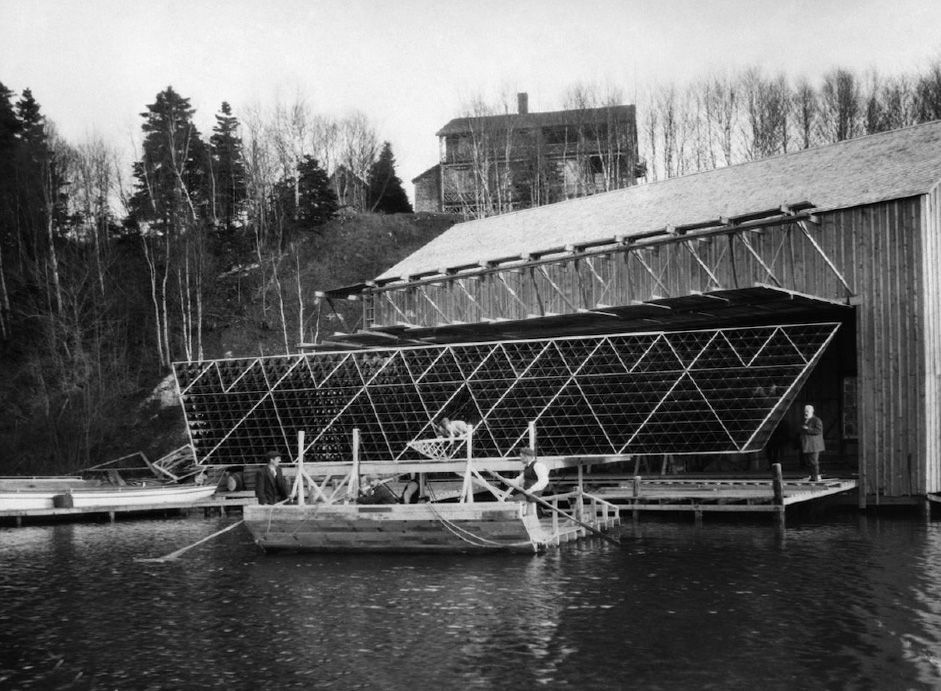 Alexander Graham Bell with his kite Cygnet I, a pivotal turn towards the development of aeronautics. 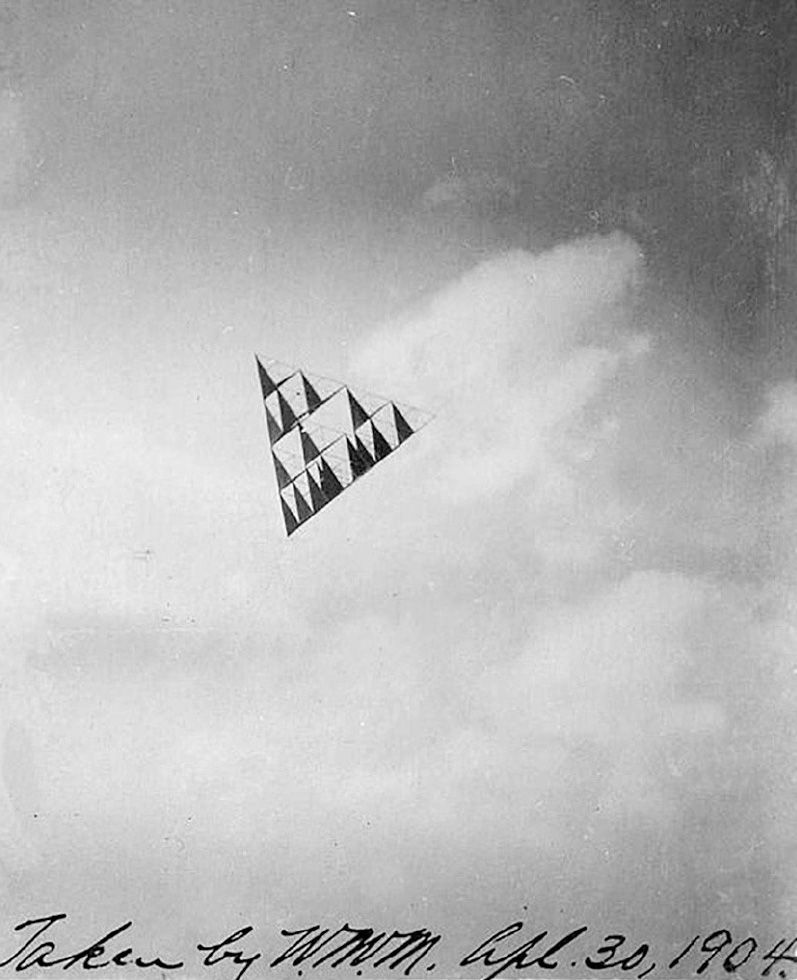 Bell’s kites were reminiscent of the way that birds flock together in their morphing, darting clouds.