DIA Beacon, on the banks of the river Hudson, an hour from Manhattan, is one of the most unique places to experience contemporary art anywhere in the world. The premise is simple but sublime. When DIA opened up the arts space back in 2003, in what was once an old Nabisco box printing factory, they began presenting landmark work in an amazing new way: in ambient daylight. The skylights of the building flood the galleries with soft natural illumination, creating a mood different from any other space you may have encountered. You roam through Richard Serra pieces, feeling as if they are in the wild rather than an institution. Even on a gloomy day, the changing daylight amplifies the mood of the work. It feels like a more human way to experience art.

One of the most memorable permanent installations for any visitor is the collection of four untitled pieces by minimalist artist Fred Sandback. Here are four sets of suggested spaces and interior aspects, delineated by colored acrylic yarn. Nothing actually exists but the yarn and the gallery in which they have been stretched, but in these expansive white rooms, the simple suggestion of a shape or a form via a clear perfect line is sensational. On any given day, you’ll see visitors walking between the panels that Sandback has conjured up, looking amazed that they can walk through what is obviously clear space. One is reminded of street mimes and physical theatre. The imagination is a wonderful thing when manipulated by someone like Sandback.

The New York-born artist, who died in 2003 at the age of 59, started out working in a very different discipline from the one he became celebrated for. As a teenager, he was outdoorsy and craft-focused, big on carving and climbing. He became fixated with stringed instruments – first by listening to music, then by making his own. When he began creating installations with strings, he was following in the minimalist tradition founded by Donald Judd (he described Judd and Dan Flavin as “giant oaks under which I might feel like the acorn”), but he was also fixated with how Giacometti cut through spaces with his elongated figurative sculptures. How marvelous that he took his tools as a musician and expanded them to, effectively, play whole entire rooms.

At times he referred to his conceptual sculpture as “a drawing that is habitable”, which makes immediate sense. When you look at a room with a Sandback, it is such a simple architectural intervention. It’s like a sketch – light and elegant but distinct. The gallery itself is the work – it just doesn’t materialize until Sandback creates his lines. And in his later pieces, where he is less fixated with creating the idea of objects that weren’t there and more preoccupied with translating lines from landscapes and other elements, it becomes a kind of luxury. The negative space is in such abundance, it’s almost opulent. His work was big. And in age in which people buy art by the square meter, that is significant. Like Serra et al, it feels like an uncontainable force. It doesn’t work on a postcard. It’s not a screensaver.

Sandback did, however, take his sculptures as a starting point for graphic works on paper. He created a wealth of prints from the 1966 through to 2001 that have the purity of his installation works, but by their very nature are even quieter. They are delicate and precise, with the sharpness of his thread interventions. Some of them look like renderings of installation projects – particularly the white on black works which look like accidentally pleasing instruction manual graphics. Some of them explore the formal qualities of print making. Some are busier than others. There are works from the 1970s which are simply variations on a pair of diagonal lines, but which still have a stately power to them. It’s minimalism at its most thoughtful.

For Sandback’s entire life, he installed everything himself in every space he worked in, and, after experiments with elasticated strings, stuck to one material – the acrylic thread that he compared to being a “number two pencil line… pretty mundane, but with plenty of color”. For all the perfection implied, and the studied, obsessive nature of his work, there was a sense of humor too. In a panel conversation a year before his death, he described his approach to color research and resourcing of materials: “They’re off the shelf … I plumb the depths of my local Wal-Mart.”

Sandback’s strength of style matched his sense of play. In another panel discussion, he told critics how “tickled” he was by the anecdotal. “My studio up in New Hampshire was raided by mice,” he explained. “And the mice found a hole in the floor so all of these various lines of color went to the hole in the floor and disappeared. So, one winter, every time I took an armload of wood, I would find a nest in the woodpile and of course, all of this color stuff looked very intentional. There was a Bauhaus mouse and there was a Miami mouse, and I got a real kick out of that. My color means more to me than I think it meant to the mouse, but I appreciated theirs.” 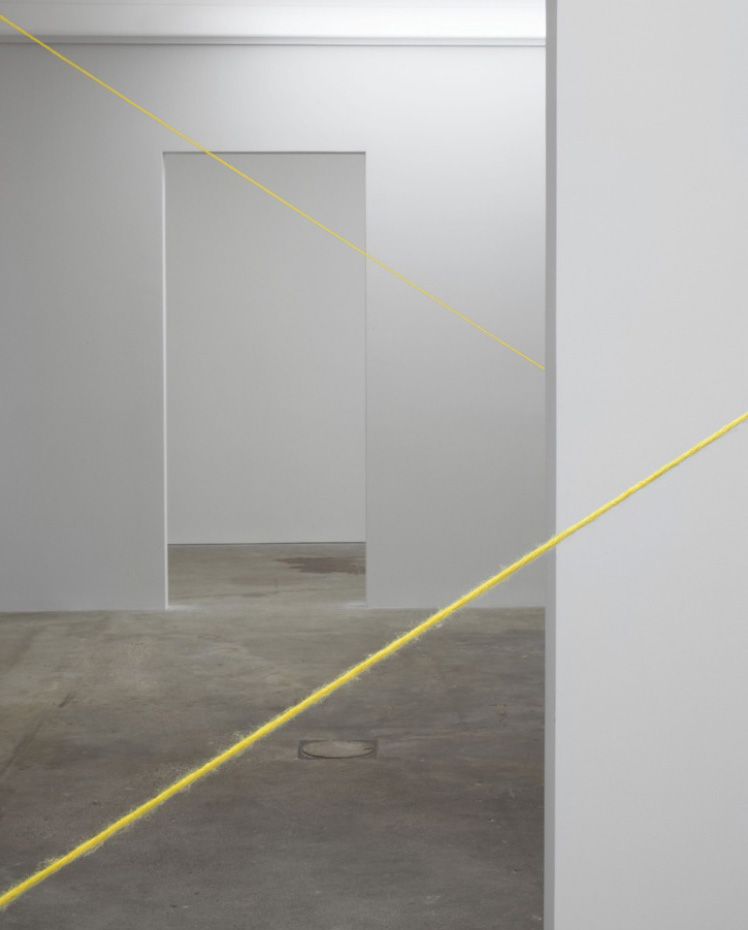 The gallery itself is the work – it just doesn’t materialize until Sandback creates his lines. 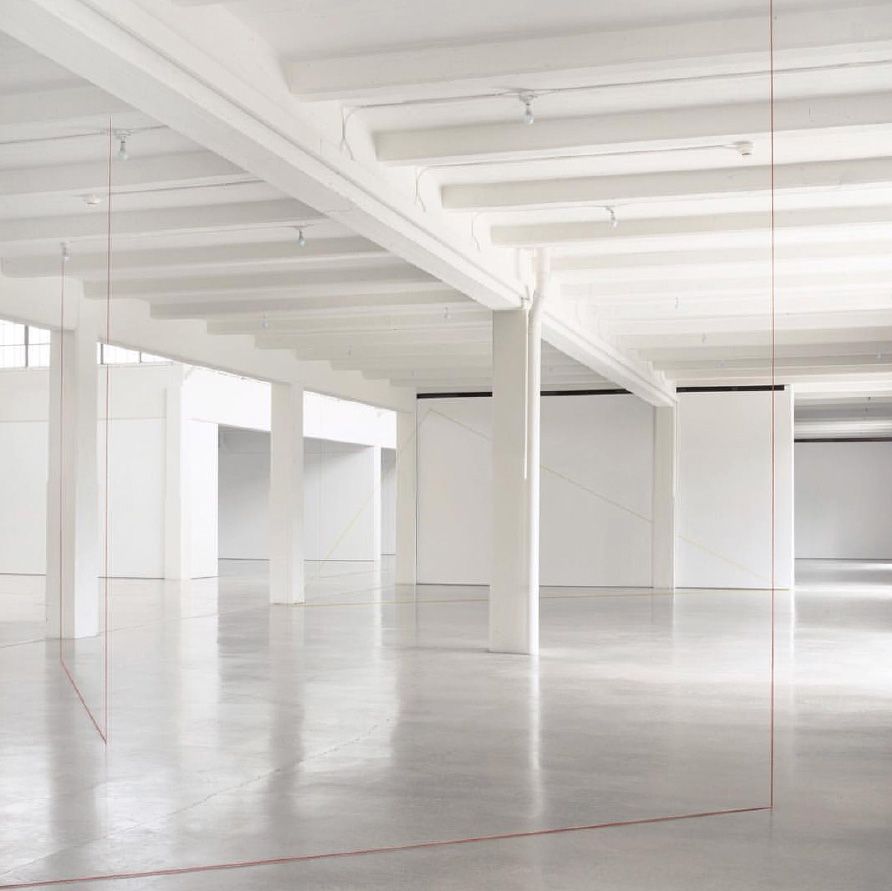 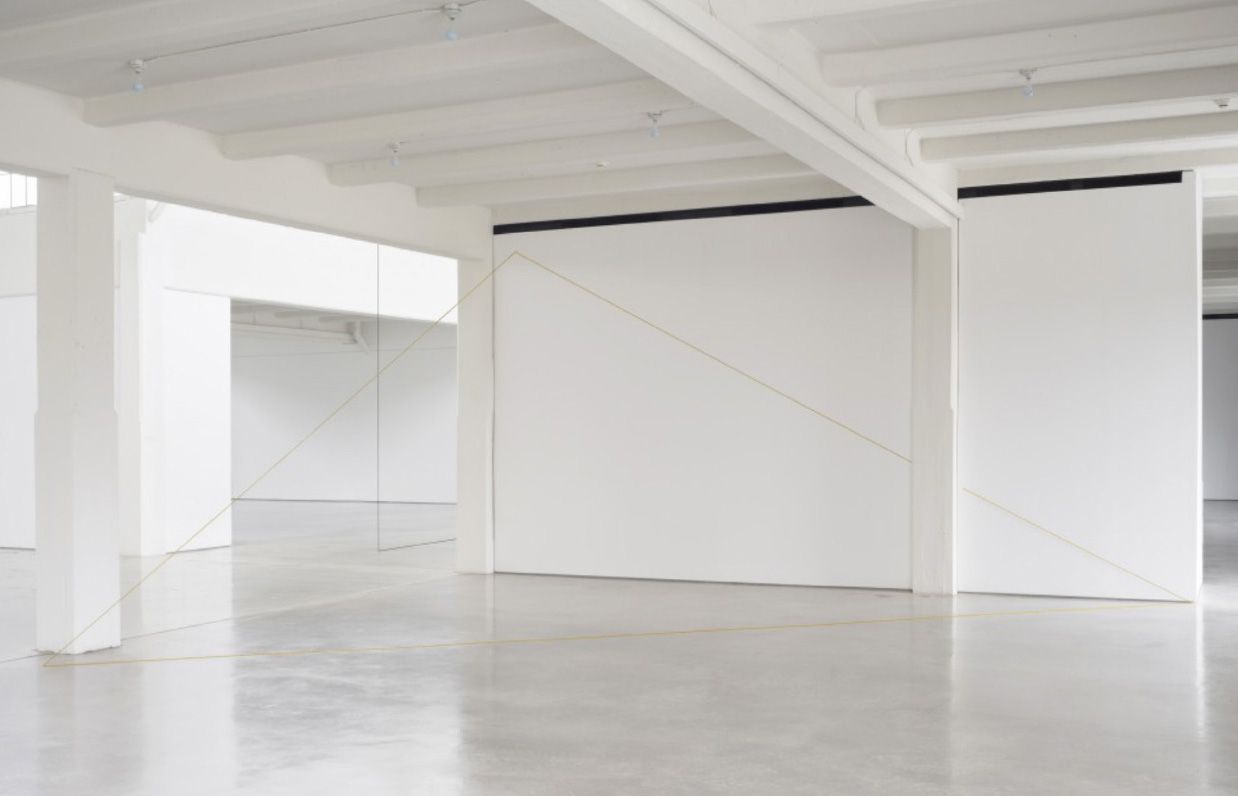 The negative space is in such abundance, it’s almost opulent. 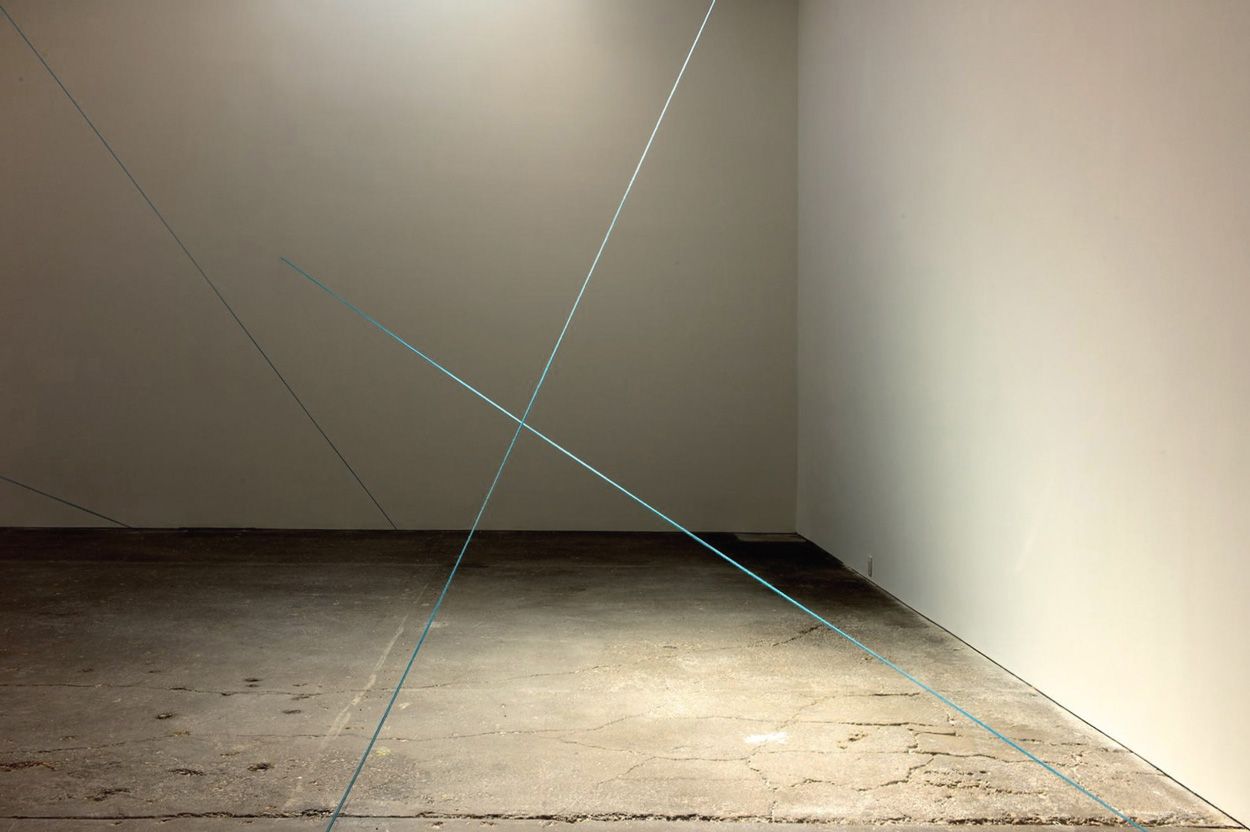 Sandback compared the acrylic thread to being a “number two pencil line… pretty mundane, but with plenty of color”. 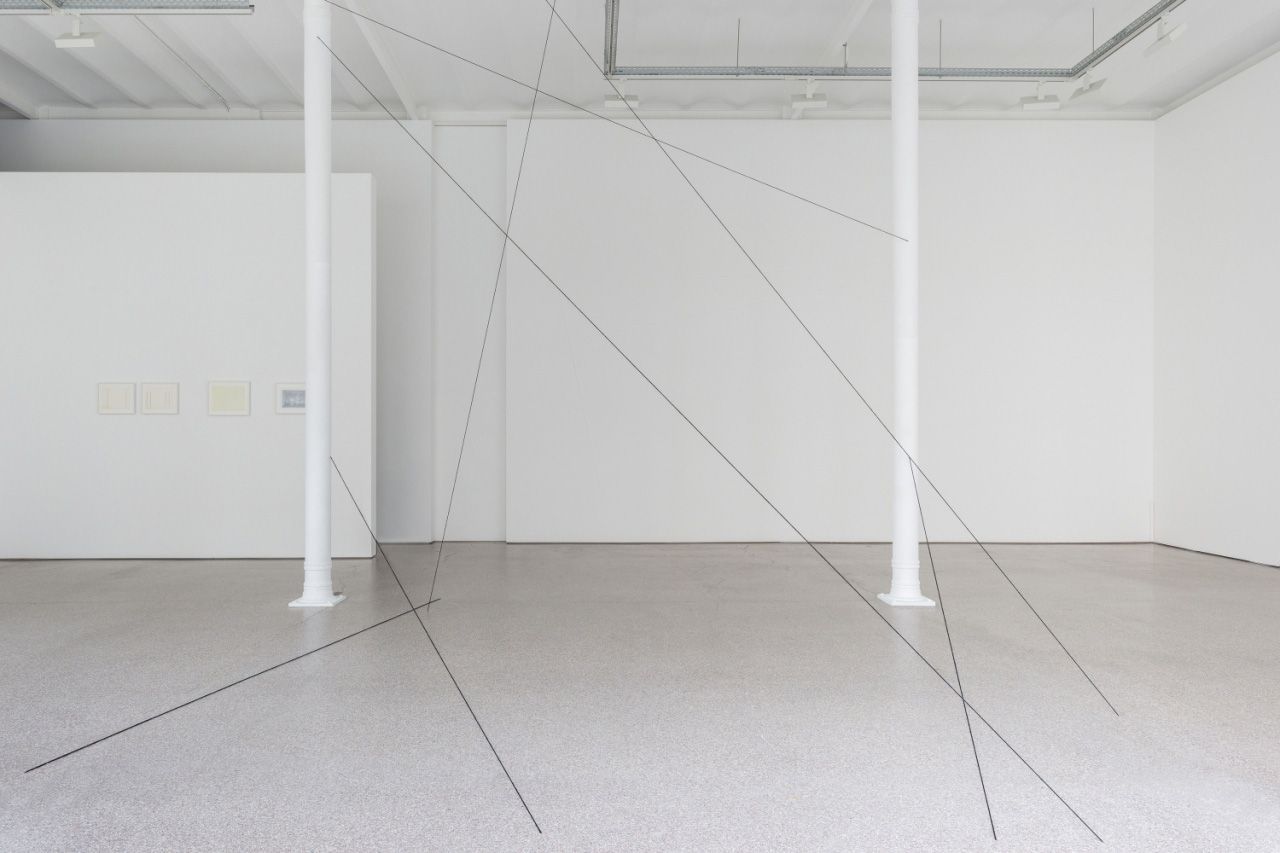 The imagination is a wonderful thing when manipulated by someone like Sandback. 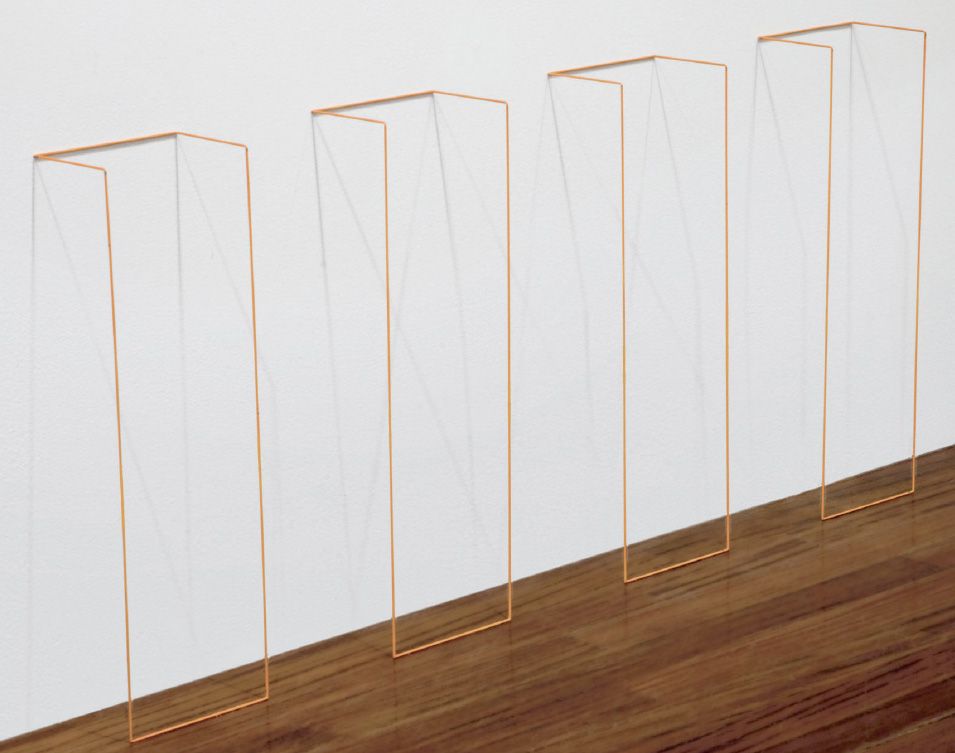 His art doesn’t work on a postcard. It’s not a screensaver. 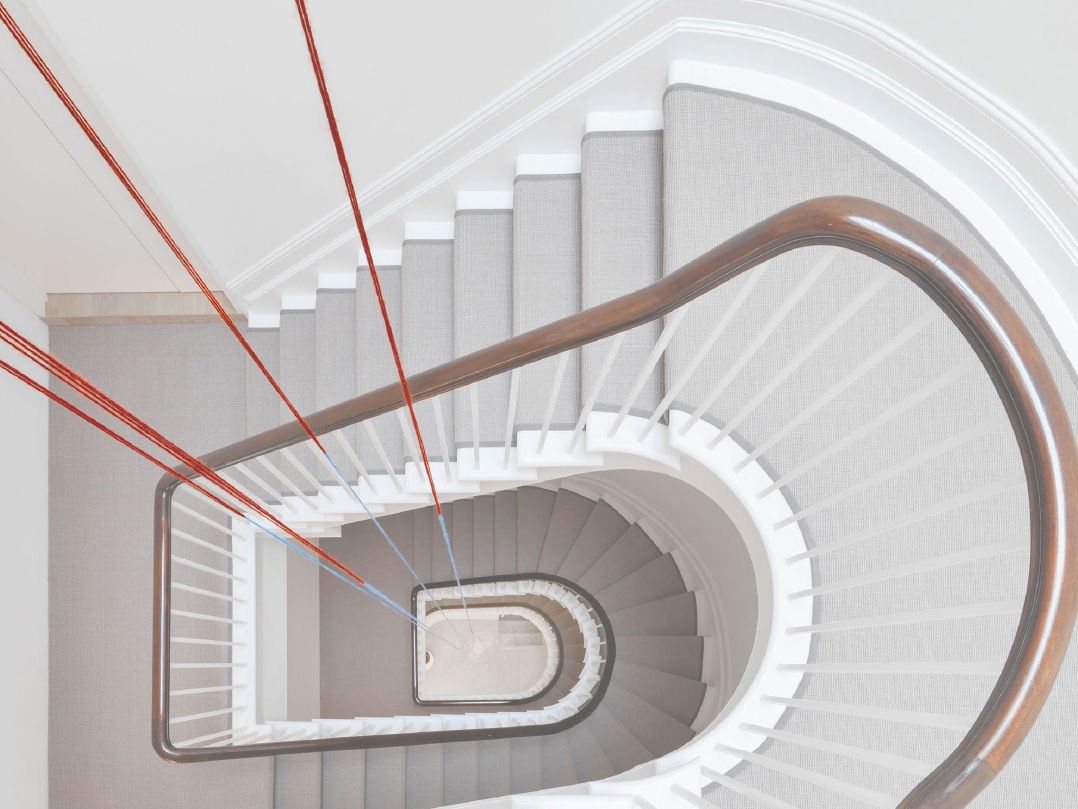 Sandback’s strength of style matched his sense of play. 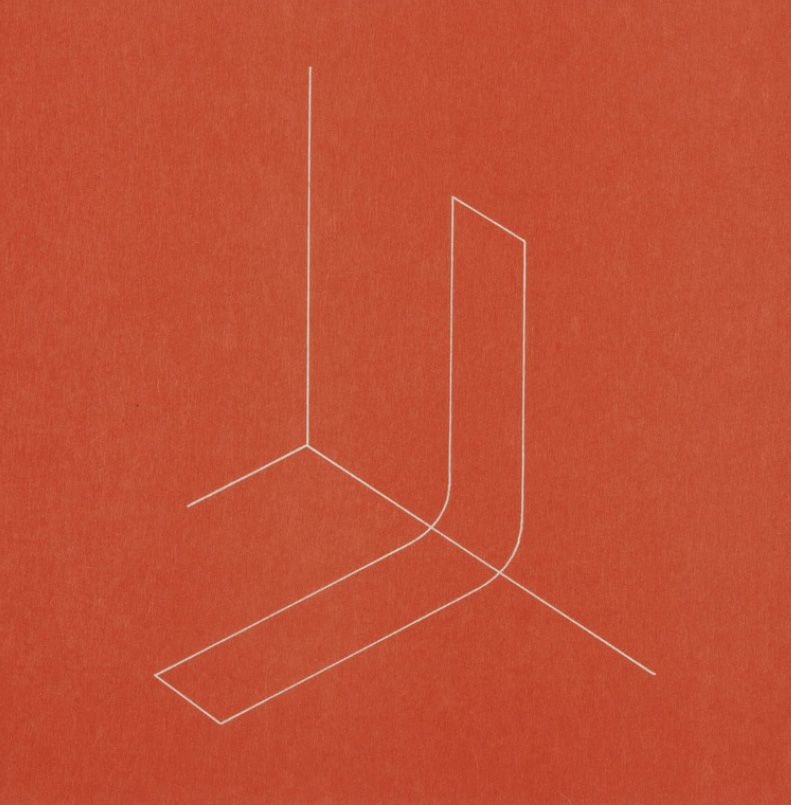 Sandback’s prints are delicate and precise, with the sharpness of his thread interventions. 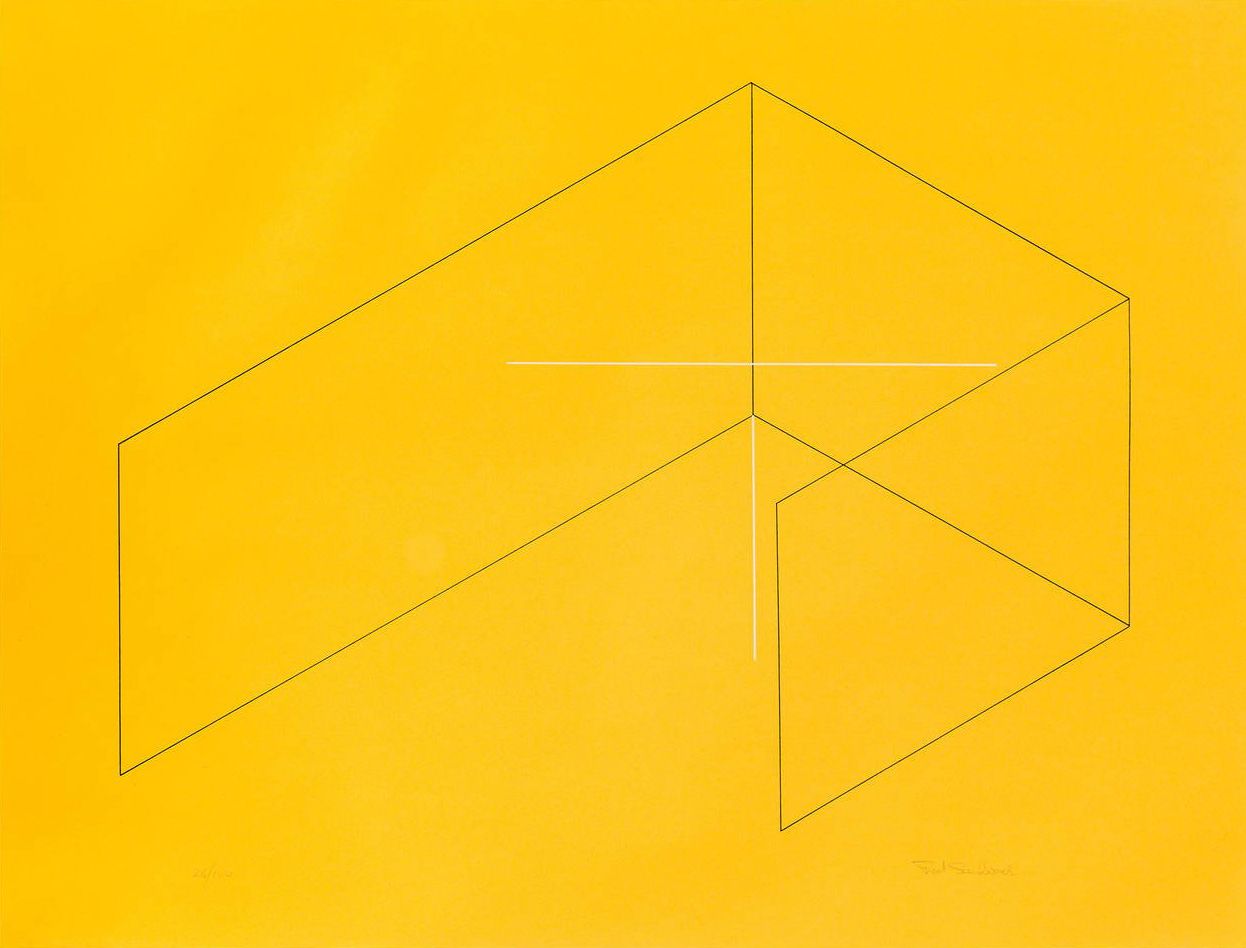 Minimalism at its most thoughtful. 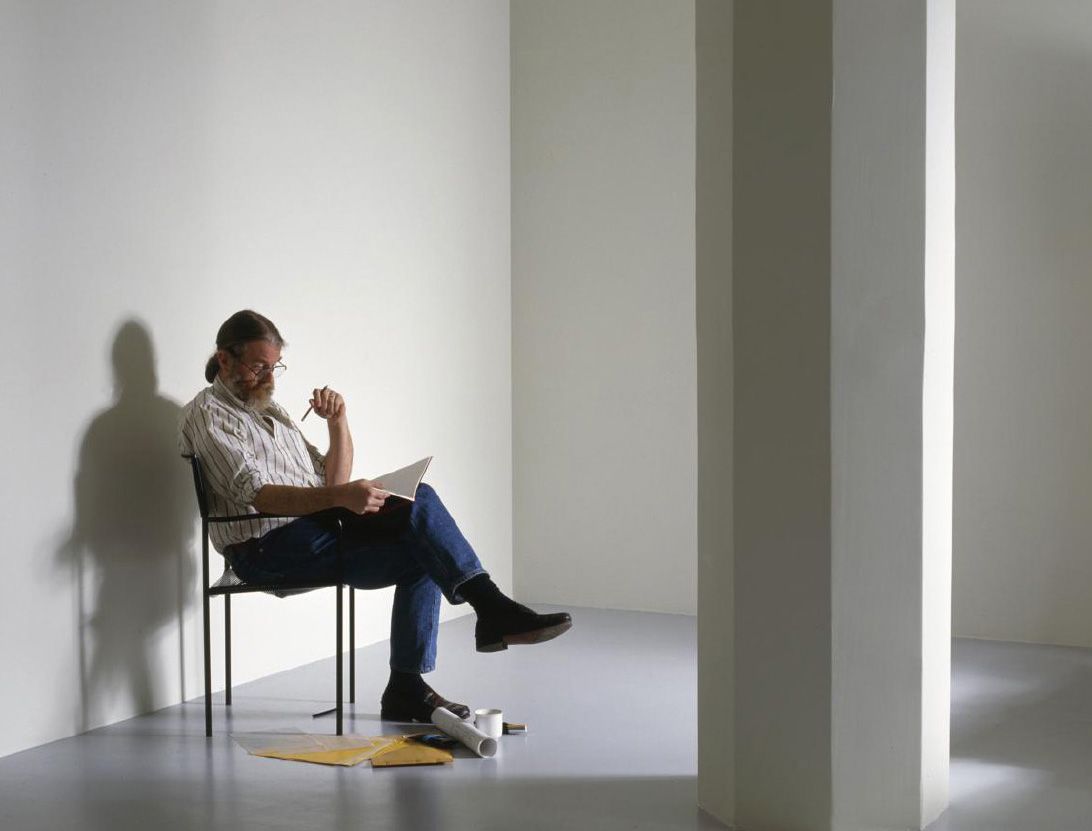 He stated that his materials were “off the shelf'. I plumb the depths of my local Wal-Mart.”