Science often makes for the most impressive and radical designer. Or at least acolyte. Think of British installation artist Roger Hiorns, who pumped an abandoned apartment full of copper sulphate solution and allowed the otherworldly ocean blue crystals to grow and take over. And Walter de Maria’s The Lightning Field, consisting of 400 polished stainless steel poles erected in the New Mexico desert to conduct violent visual Wagnerian electrical strikes from the sky. Science and art are intrinsically linked – both offer us an analytical skillset to explore the world around us.

The study of cymatics (derived from the Ancient Greek for “wave”) offers us a truly unique way to look at sound. Its origins are fairly esoteric and blur the boundaries of arts and science. Swiss physician Hans Jenny grew up immersed in a musical family and was an immensely talented child pianist. It was something that he took with him into his career in science, after he completed a doctorate in medicine and went to teach at the Rudolf Steiner School in Zurich. In 1967, he published the results of extensive experimentation in cymatics: ‘Kymatik: Wellen und Schwingungen mit ihrer Struktur und Dynamik’ (‘Cymatics: The Structure and Dynamics of Waves and Vibrations’). It remains the most influential text on the subject to date.

Work in this area had been carried out by great thinkers centuries before. Galileo had observed the pleasing shapes and forms made by oscillating particles in the early 17th century: “After scraping a brass plate with a sharp iron chisel in order to remove some spots from it and running the chisel rather rapidly over it, I once or twice, during many strokes, heard the plate emit a rather strong and clear whistling sound: on looking at the plate more carefully I noticed a long row of fine streaks parallel and equidistant from one another.”

Jenny would take things to a new level of consideration and analysis. His experiments using lycopodium powder, scattered on a surface that responded by vibration to sound waves, created profoundly beautiful imagery. The powder responded, at times, as if it were iron filings shifting under the influence of a magnetic field. At times it looked like it was on a rolling boil, with material rising volcanically from a central point, and then carried out to a peripheral plane. Under the influence of certain tones, two distinct elements could be seen to rotate with perfect synch, either clockwise or anti-clockwise depending on the frequency.

It was Jenny who began to suggest links between cymatics and the natural world of pattern – could there be a sound-matrix at work that has created everything we see around us, including stripes and graphics on flora and fauna? Complex theories and studies support the notion that wind driven storms and microscopic bubbles in the early oceans could be responsible for life itself. There are parallel theories that suggest maladies are triggered by thought, with the human brain controlling certain frequencies that resonate with the body, and stress and emotion warping those frequencies in certain ways to create disharmony. The theories are extraordinary, and the studies remain in their infancy.

Artists continue to experiment with the formal properties of cymatics – and if we won’t find the meaning of life in their work, we continue to find great profound beauty. There is a certain shamanistic, magical quality to much of it. When artist Meara O’Reilly worked with Björk on concert visuals for her Biophilia tour, it created something holistic for the singer to be immersed in and perform from. Cymatic patterns were generated by the basslines of the songs, and O’Reilly, working with Snibbe Interactive on the digital production, projected the results on the floor and behind the singer. The oscillating graphics look pure, timeless and elemental, as if they transcend electronica. Cymatics is science at its simplest, and perhaps its most beautiful. 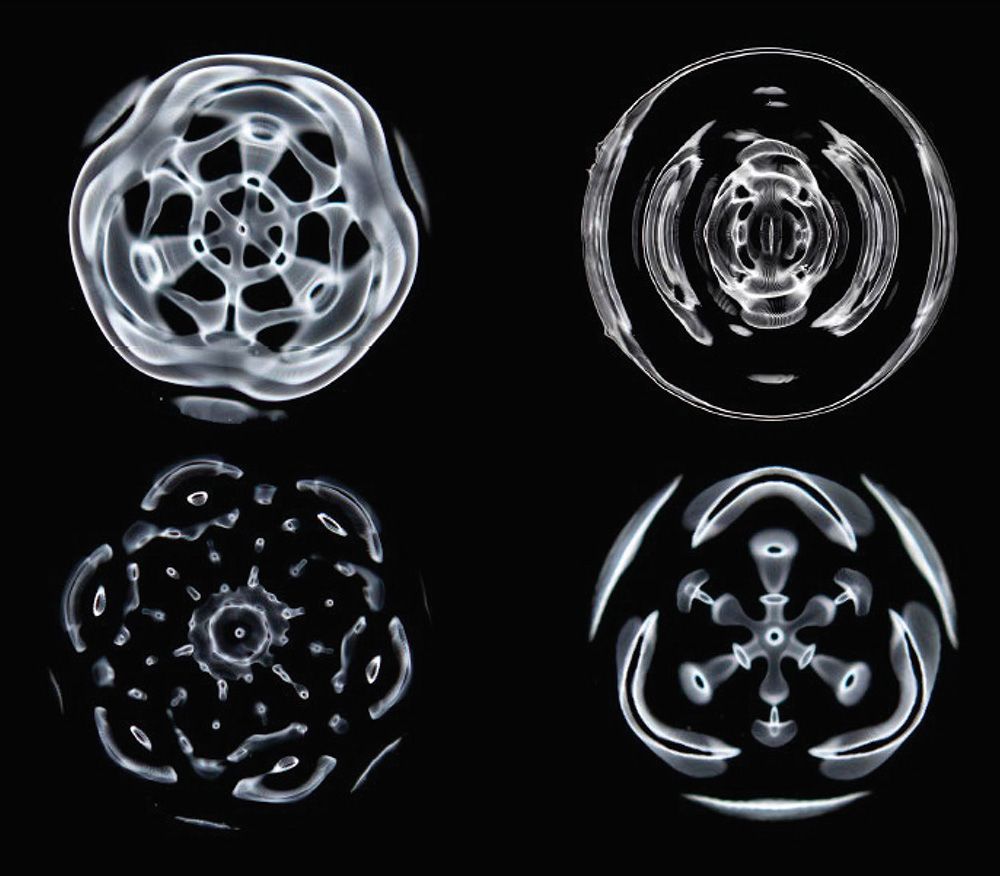 Cymatics is science at its simplest, and perhaps its most beautiful. 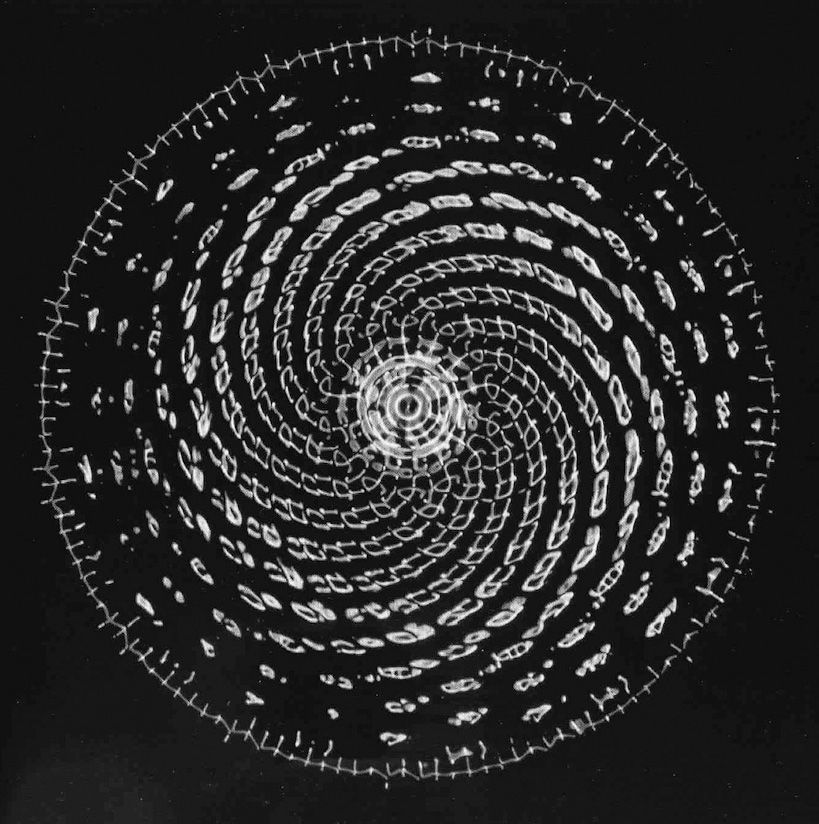 Science and art are intrinsically linked – both offer us an analytical skillset to explore the world around us. 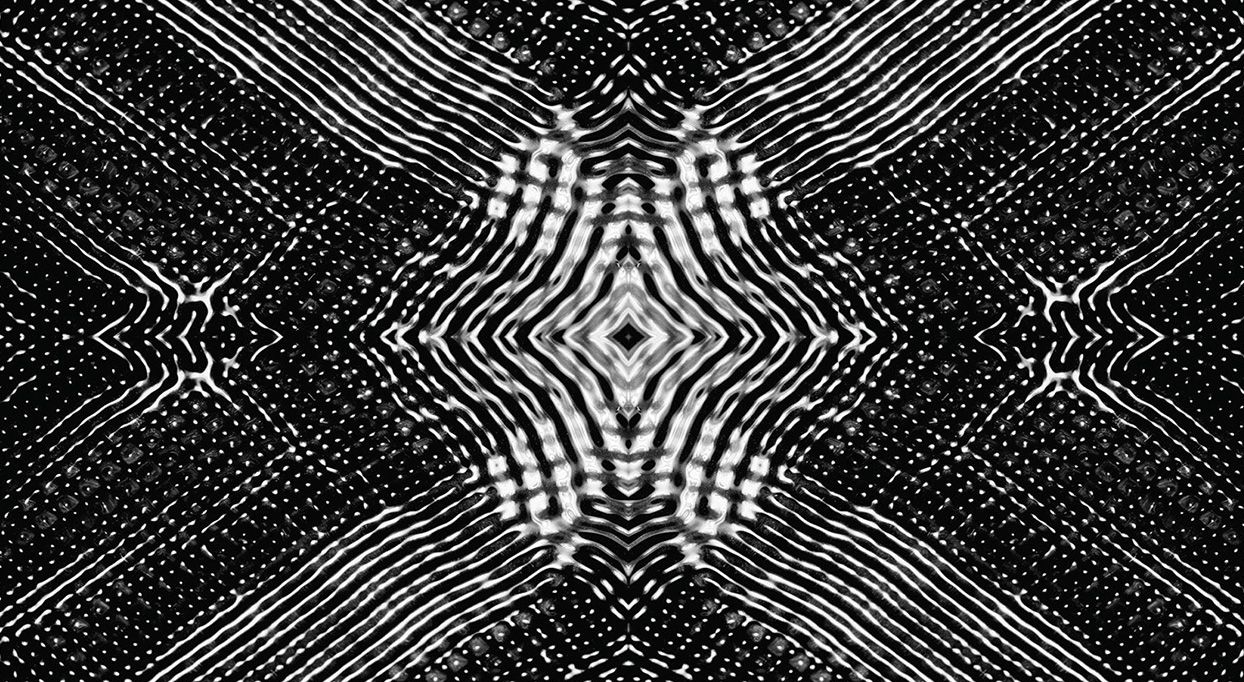 Nature often makes for the most impressive and radical designer. 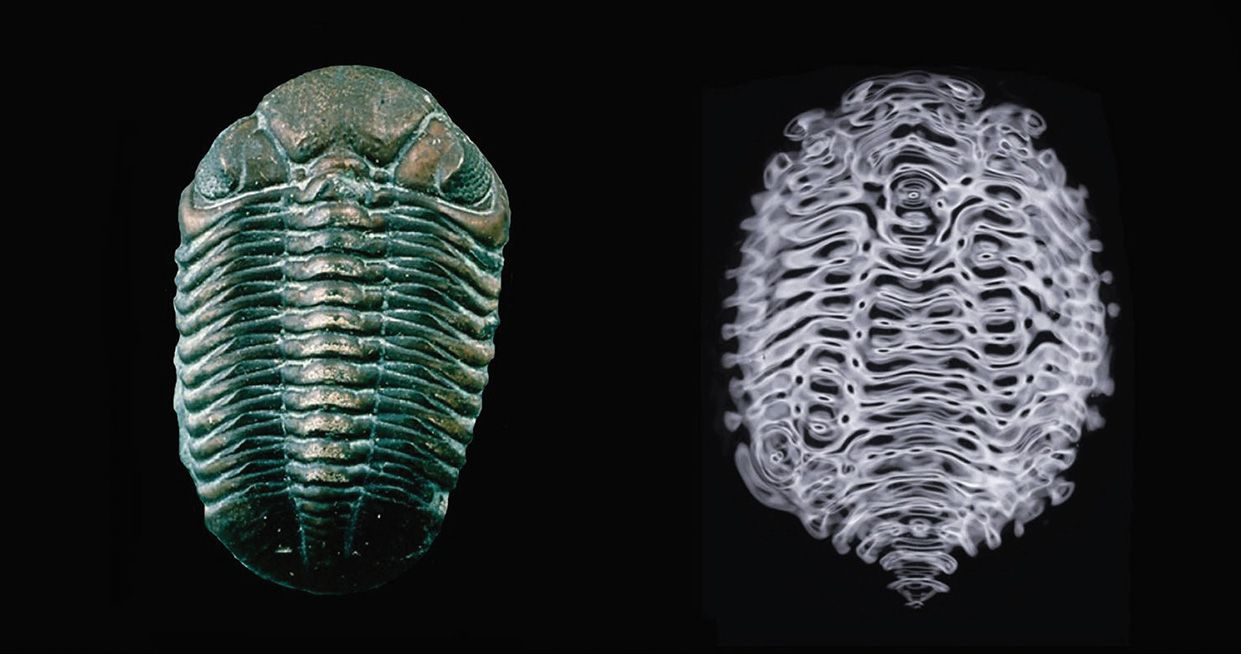 On the left: a marine trilobite fossil, from an early Cambrian period, circa 526 million years old. On the right a trilobite pattern appearing through cymatics. 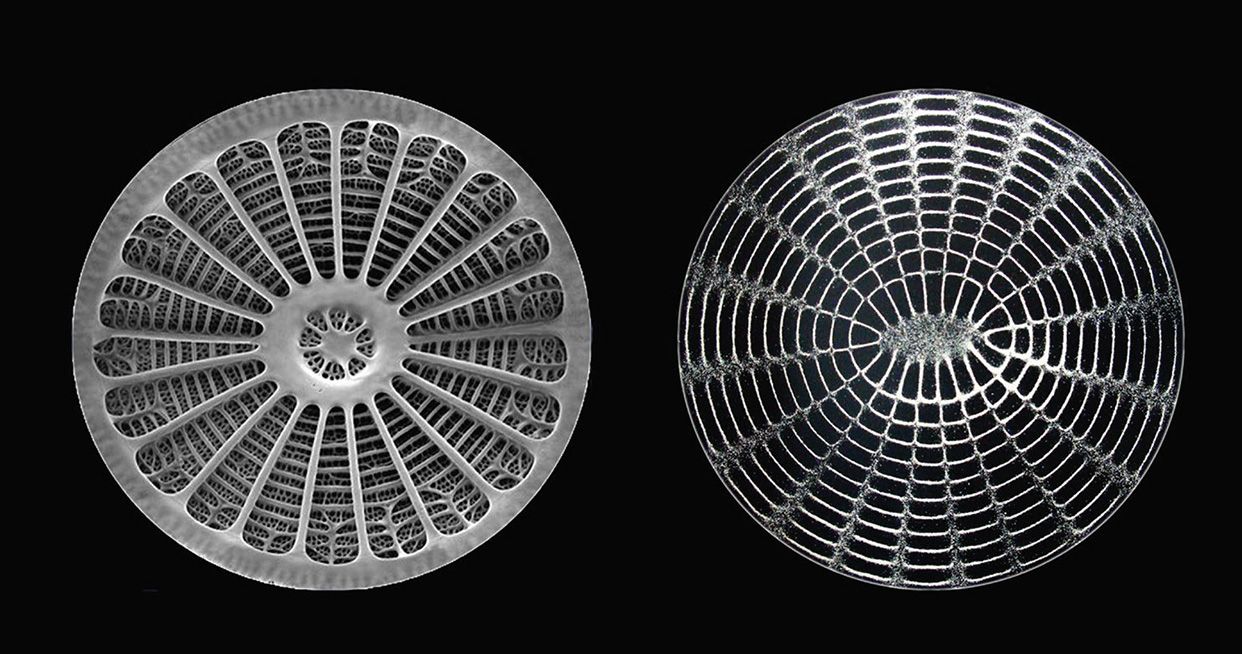 On the left, a diatom algae, Arachnoidiscus, from the Jurassic period, circa 200 million years old. On the right: a cymatic design captured through sound and vibrations. 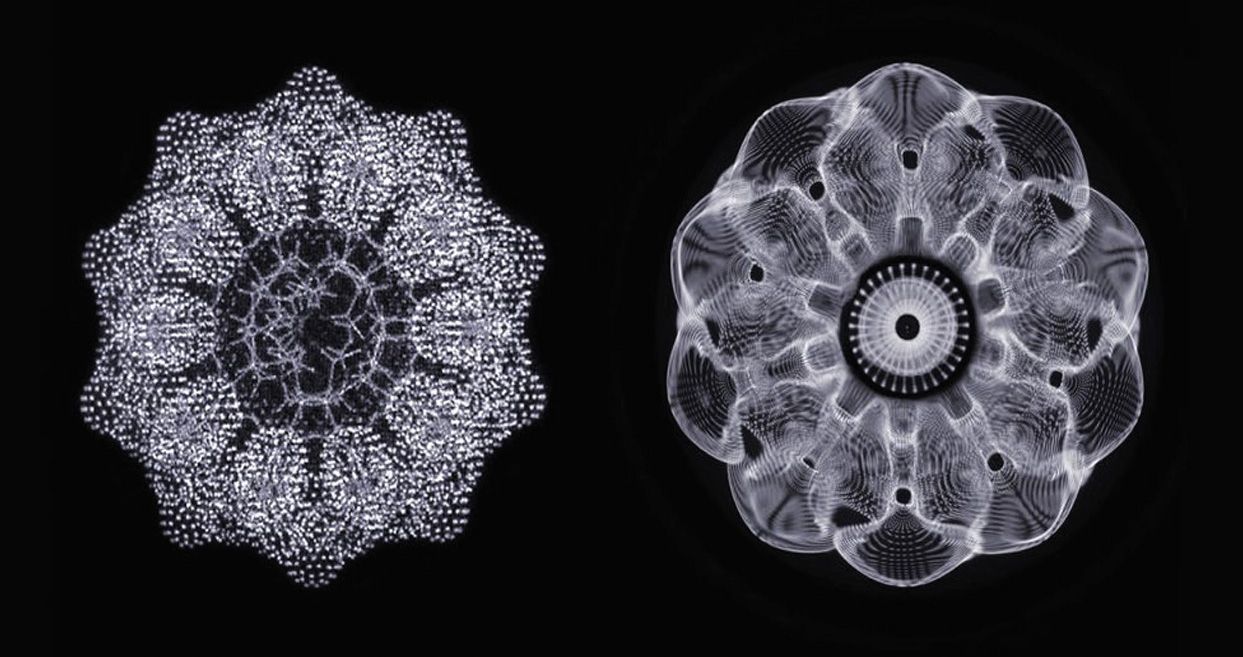 On the left: a D.N.A. cross-section captured by Dr. Robert Langridge. On the right: a laboratory-created cymatic D.N.A. 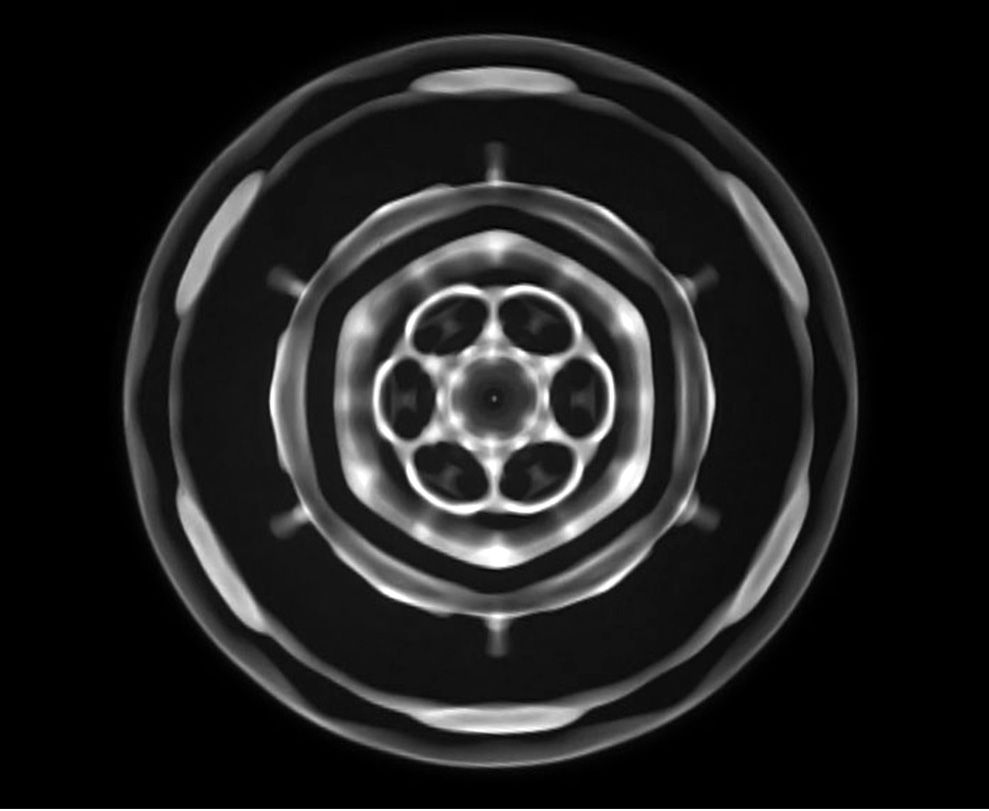 There is a certain shamanistic, magical quality to much of cymatics seen through artist's expressions. 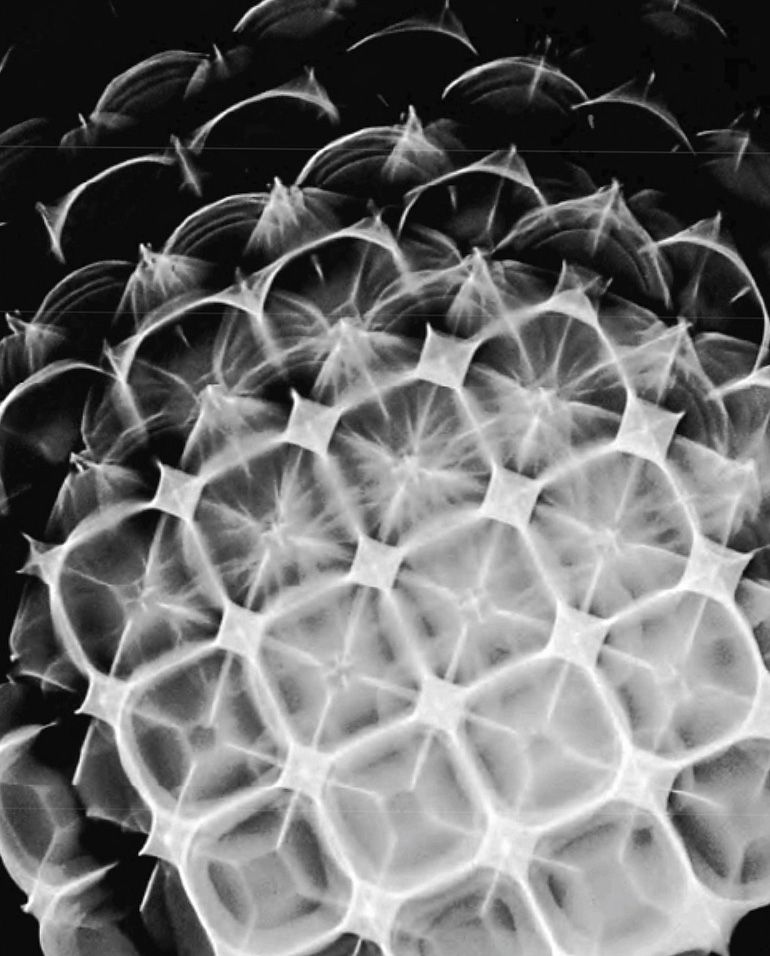 Hans Jenny began to suggest links between cymatics and the natural world of pattern. 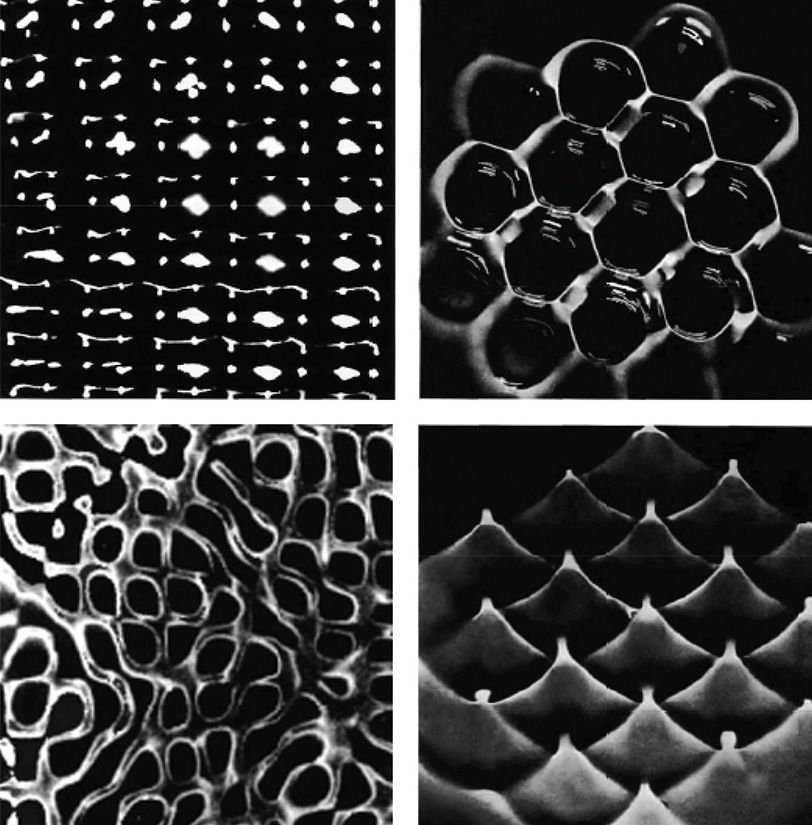 Can there be a sound-matrix at work that has created everything we see around us? 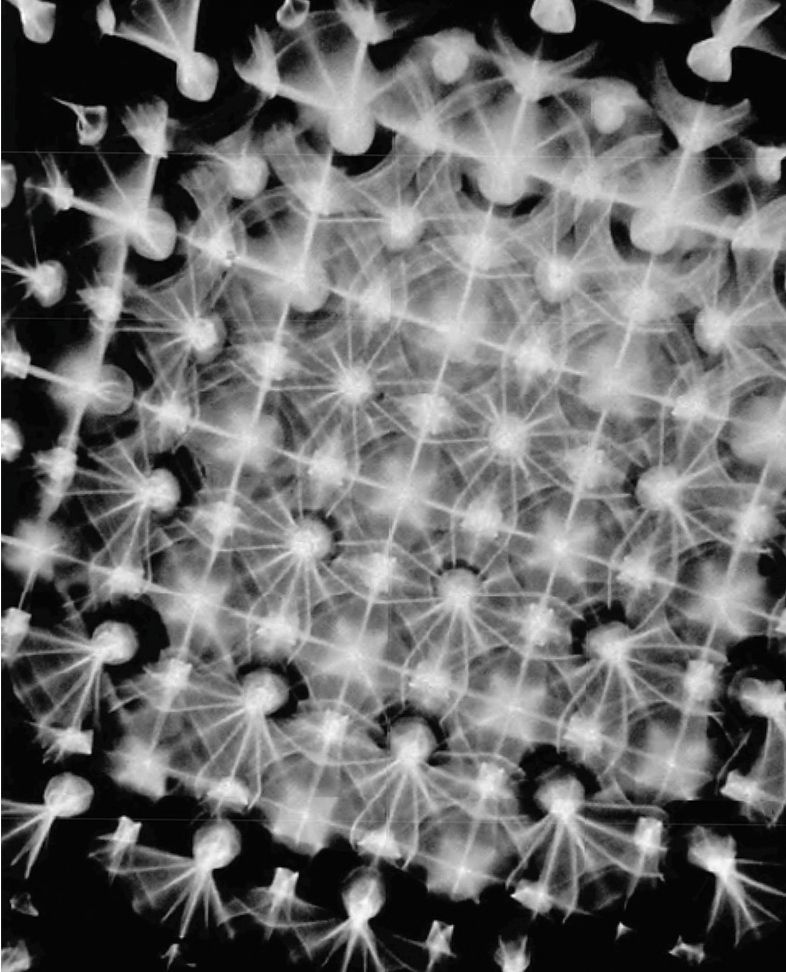 Jenny's book ‘Cymatics: The Structure and Dynamics of Waves and Vibrations’ remains the most influential text on the subject to date. 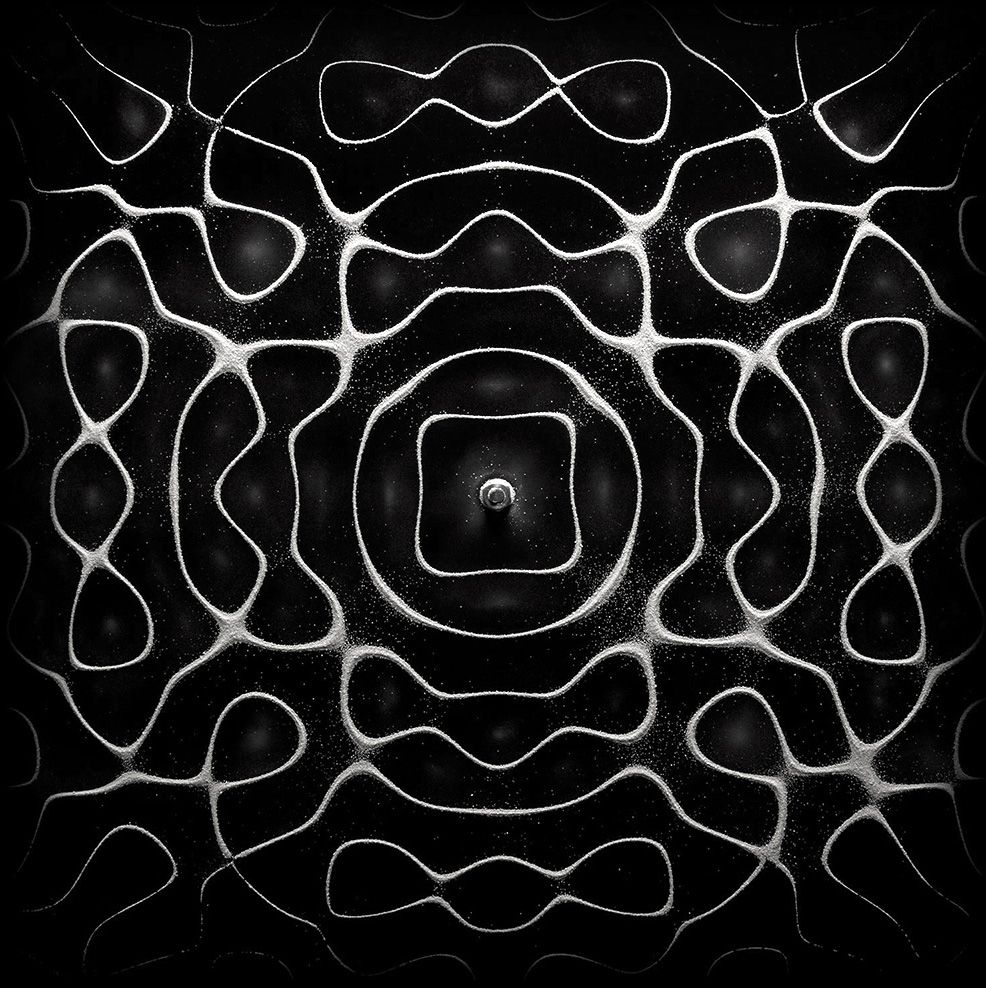 The study of cymatics offers us a truly unique way to look at sound.