While Issey Miyake remains one of the ten most influential people – living or dead – in the history of fashion, the Tokyo-based style visionary detests the term “fashion designer.” He always prefers the term “making things” and continues, he says, to work towards the concept of “no fashion.” Looking at Miyake’s archive and the ongoing output of his studio, it’s easy to understand why. Certainly, he operates on a different level from the contemporary European fashion houses with their revolving doors of creative directors. He is more likely to be found collaborating with architect Tadao Ando than a fair-weather streetwear brand with an ephemeral social media following.

It is Miyake’s hunger for collaboration that is responsible for one of his studio’s greatest strengths – hyper advanced textile design. When he first visited Paris in the mid 1960s, he worked for three of the powerhouses of high style: Guy Laroche, Hubert de Givenchy and Geoffrey Beene. He then started his own line, under his own name, with a slightly unusual but singular mission – to work within the dynamic of a collective. “When I was in Paris, I felt like an outsider, and unable to compete,” he says. “I didn’t know how to create work at a higher level than what I was seeing. After coming back to Japan, I collaborated with textile designers, and people who were capable of cutting clothes and using great technology. I am not the kind of person who can do everything. When we are working in this kind of environment and industry we need to accept the knowledge of others. Today, some of my team have been working with me for more than 40 or 50 years.”

His work with synthetics along with his interest in recycling and the environment is peerless in the industry. Despite coming with the same rarefied price points as the finest Loro Piana cashmere, the bulk of Miyake’s product is machine washable, and can last for decades. His technical innovation has trickled down to the mass market – he once told the creative director of Uniqlo that he was a fan of the brand’s thermal underwear. He was surprised to hear that, in fact, it was a textile Miyake himself had helped pioneer 30 years before.

While Miyake can be found working with professors of mathematics and physics to help shape his textile experimentation and subsequent silhouettes, he is also fixated with heritage Japanese textile manufacturing. Wearable paper has reappeared repeatedly in the Miyake collections, ever since he first worked with traditional Shiroishi papermakers in the early 1980s.

It’s often easy to identify Miyake’s clothes by an extreme close up view of their textiles alone – the subtlety of double cotton, or the heat-treated pleats of Pleats Please and Homme Plisse, the texture of nylon taffeta and polyester twill. A recent innovation from the Tokyo atelier is 3D Steam Stretch ¬– a specially woven fabric that contracts into sculptural rigid structures when it is treated with, as the name suggests, steam. The cloth ends up with an origami-like look to it, and its production negates – in a way – the whole traditional methodology of pattern cutting and sewing to create a silhouette. Using computer programs to predict how a weave will react to steam, textiles can be woven to create the perfect final shape.

The 3D Steam Stretch experiments, carried out under the auspices of his head of textiles Mr Kazuyoshi Tataktsu, are an extension of what Miyake was doing years before with his A-Poc line. A-Poc was a radical attempt to do away with cutting and sewing entirely – the production was based on feeding thread into a state of the art computer-programmed machine that would then generate a complete garment. Shown and sold between 1997 and 2001, A-Poc showed Miyake – working with collaborator Dai Fujiwara – at his most commercially experimental. The resulting garments appeared like wonderful elongated flat artworks and were exhibited both as statics and in performance pieces. While there was no cutting before any actual sewing, scissors were always an integral part of the process of making the finished product your own before wearing it. Like a kind of space age, one size fits all, capsule wardrobe, the flat garments came with perforations for you to cut into, to ensure the right length of coverage for limbs for your body type.

Miyake and his extensive collective of designers and assorted collaborators represents an approach to fashion that is unique in the 21st century. For many years, his work was considered ‘body sculpture’, exhibited in galleries worldwide and beloved by the likes of Grace Jones for stage attire. He was considered – and still is – as much an artist as an industrial designer. The silhouettes his studio creates today remain innovative, avant-garde and true to the spirit of Miyake. But what makes Miyake’s fashion so unique is the fact that his approach is so holistic – his aesthetic is quite literally woven into the fabric of every single piece of clothing bearing his name. 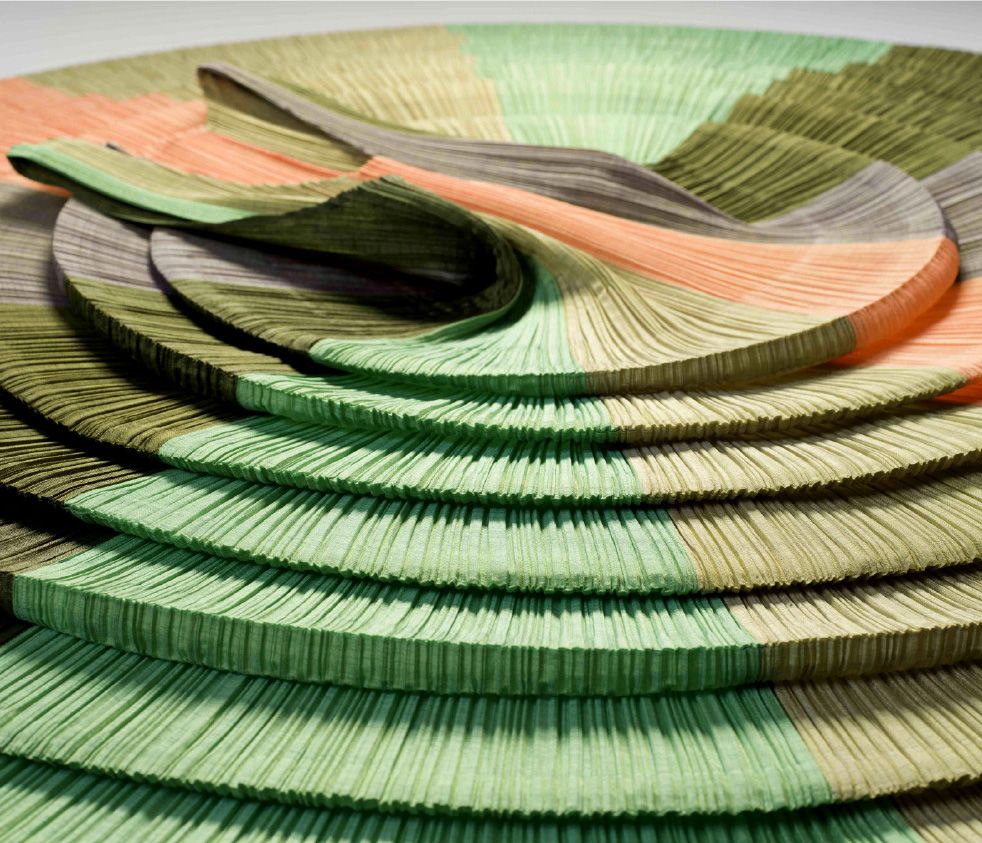 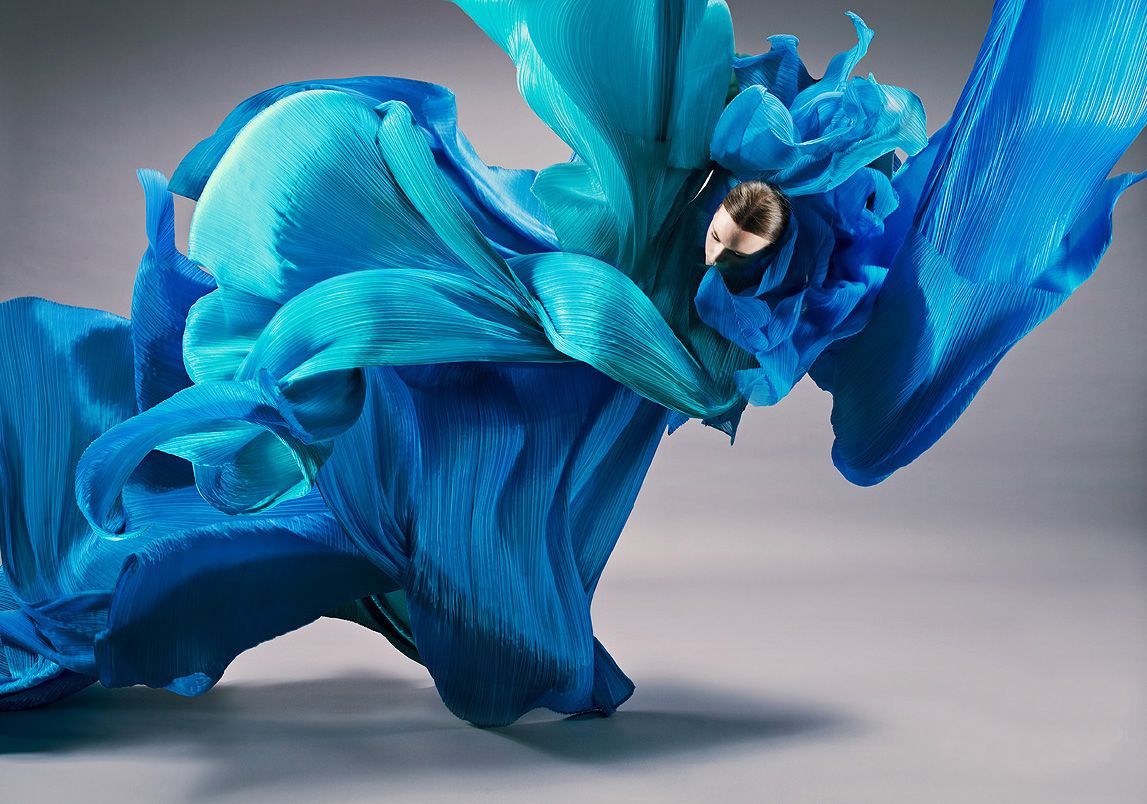 Pleats Please reflect Issey Miyake’s fundamental concept that “design is not for philosophy, but for life". Video. 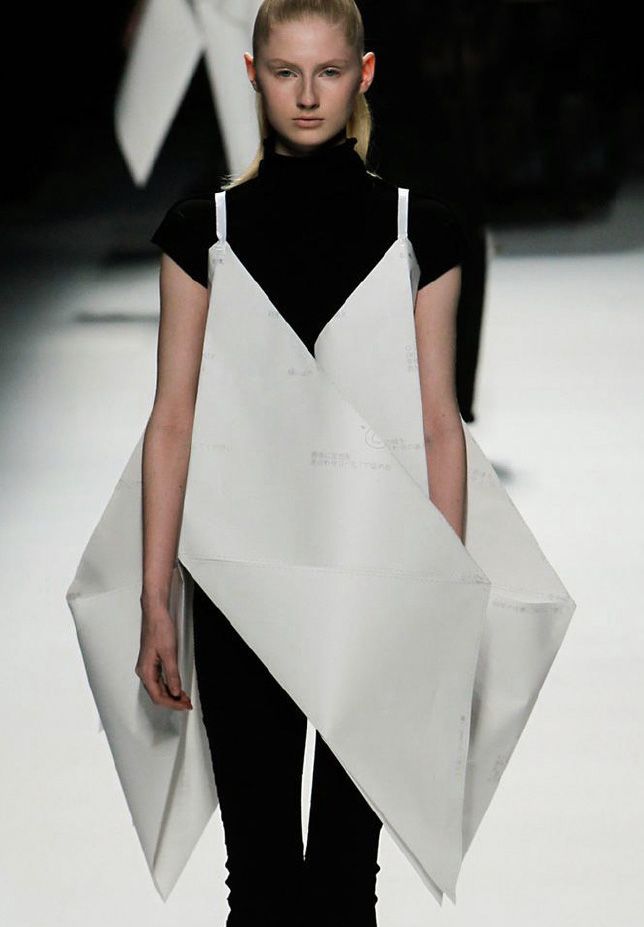 Wearable paper has reappeared repeatedly in the Miyake collections, ever since he first worked with traditional Shiroishi papermakers in the early 1980s. 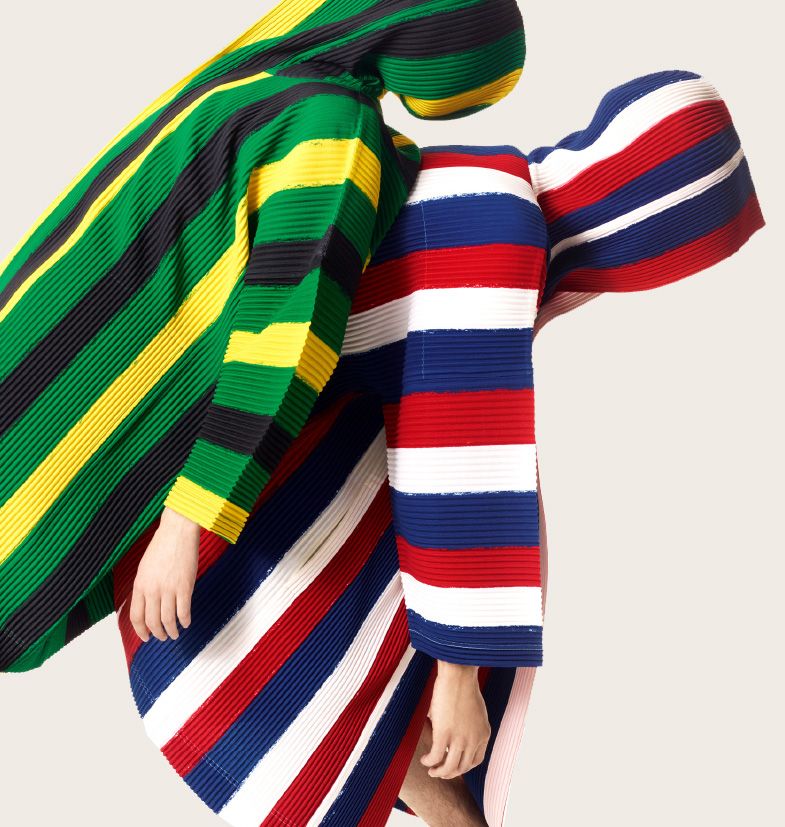 Homme Plissé. Textiles with a wrinkle-proof, quick-drying base material are given pleats with a uniform width. Video. 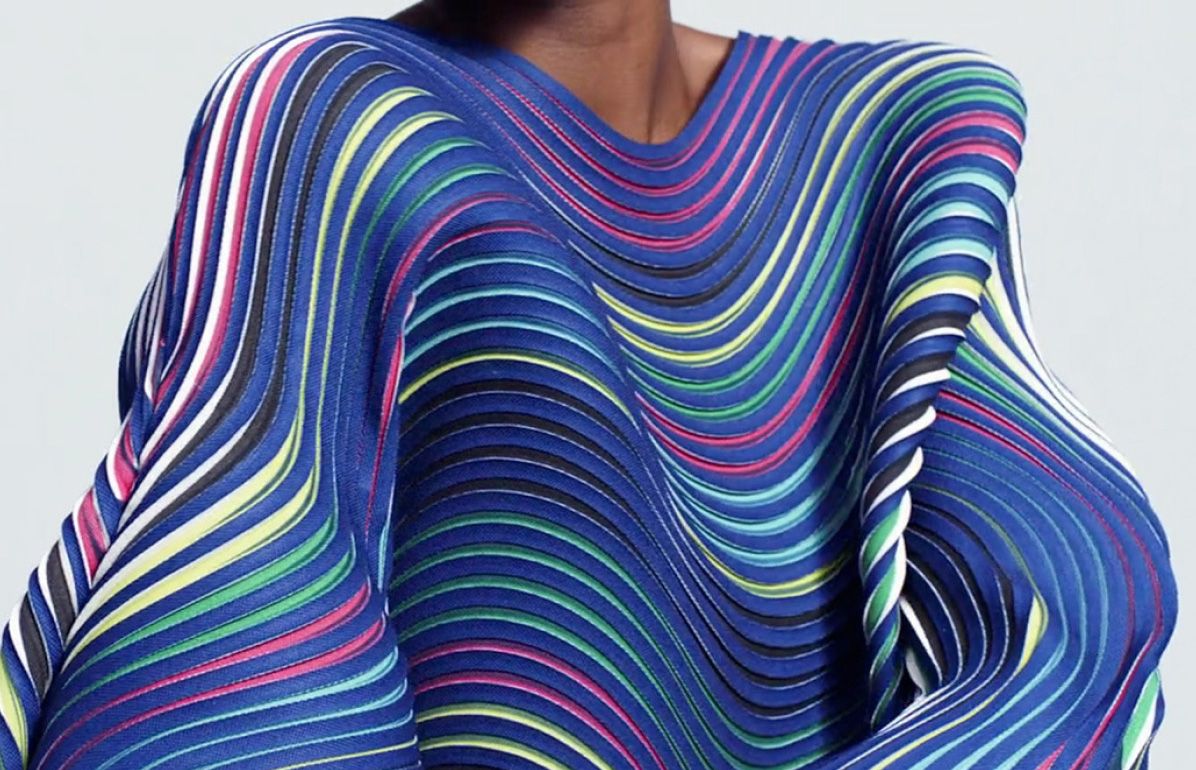 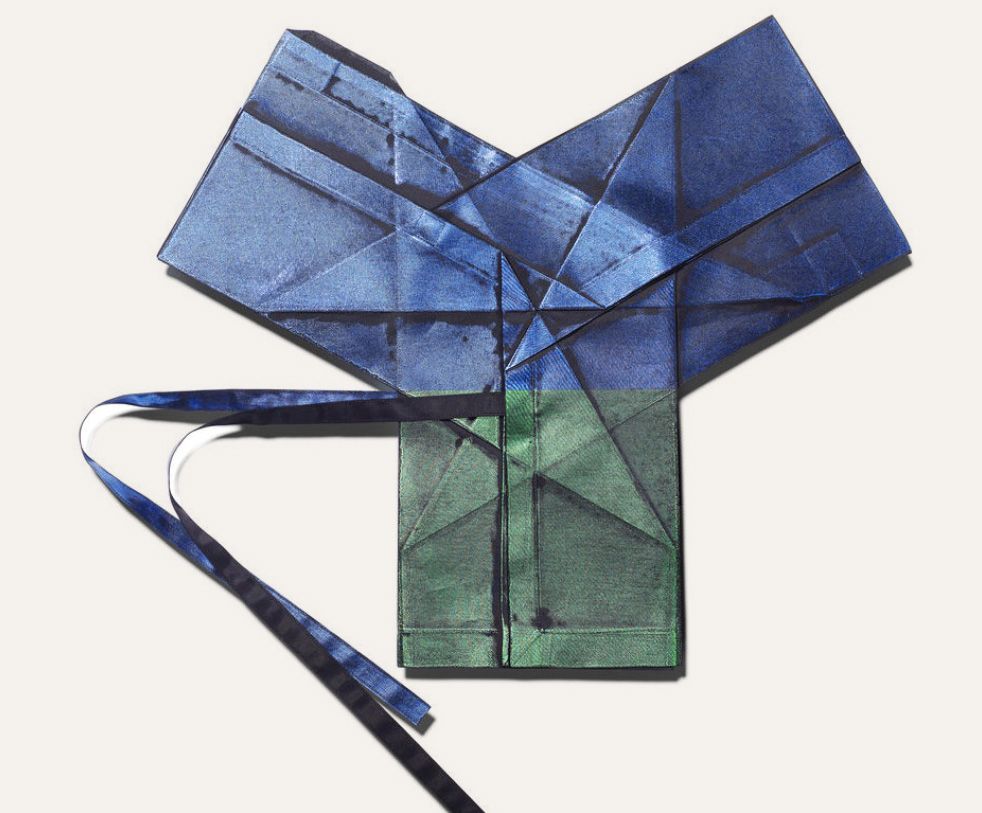 132 5. Born from a union between mathematics and clothes making. 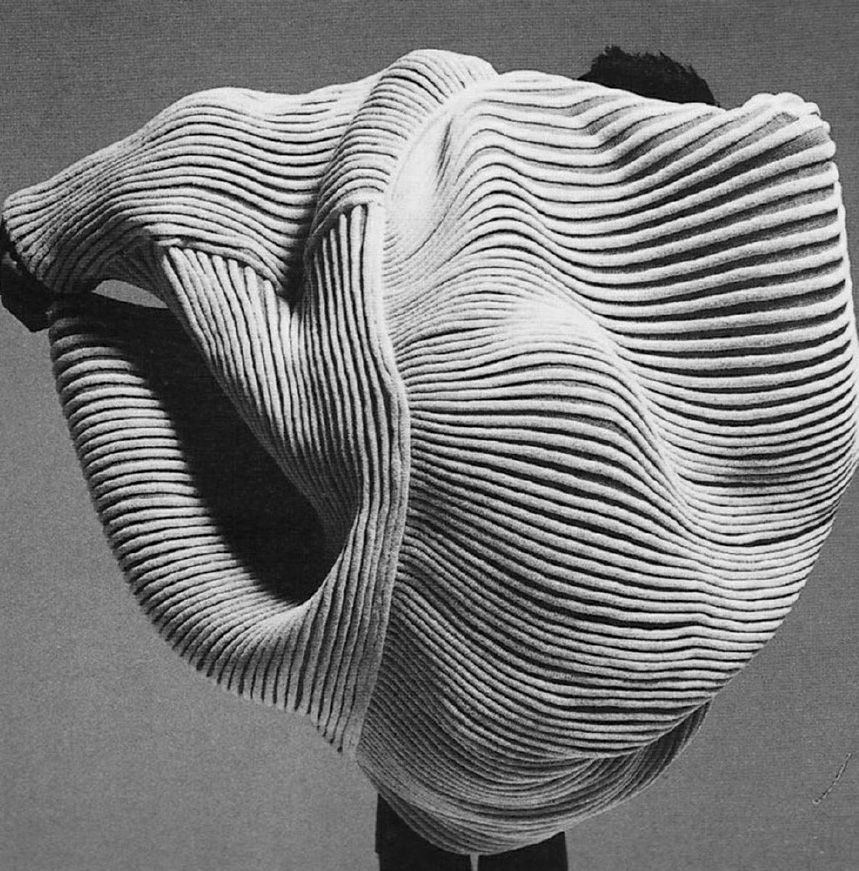 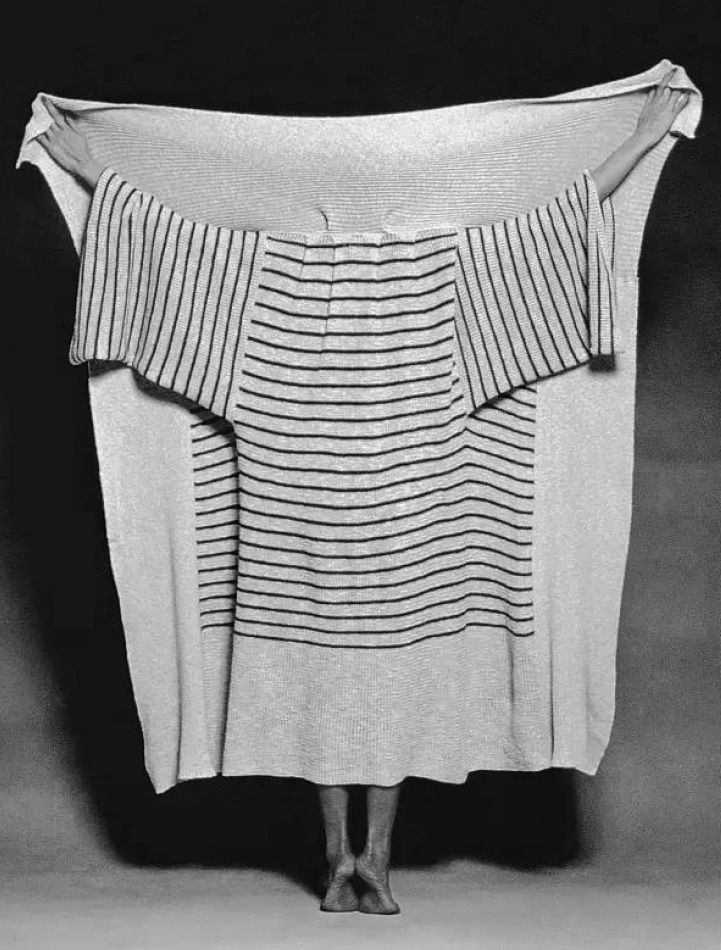 A-POC 1976: The collections are founded in the philosophy of clothing made from “a Piece of Cloth,” a concept which explores not only the relationship between the body and clothing, but also the space that is born between them. 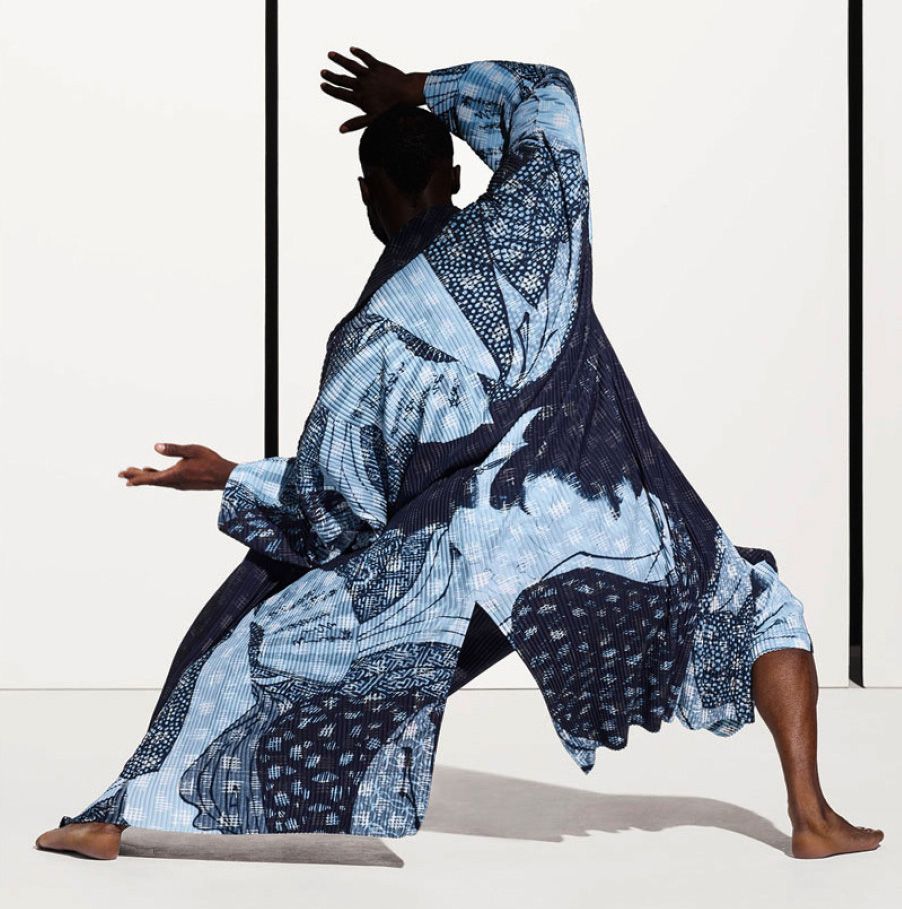 2016 capsule collection Haru for Homme Plissé. Here an image from artist Hokusai’s erotica woodblock print, “The Dream of the Fisherman’s Wife,” which had inspired Pablo Picasso in the past. 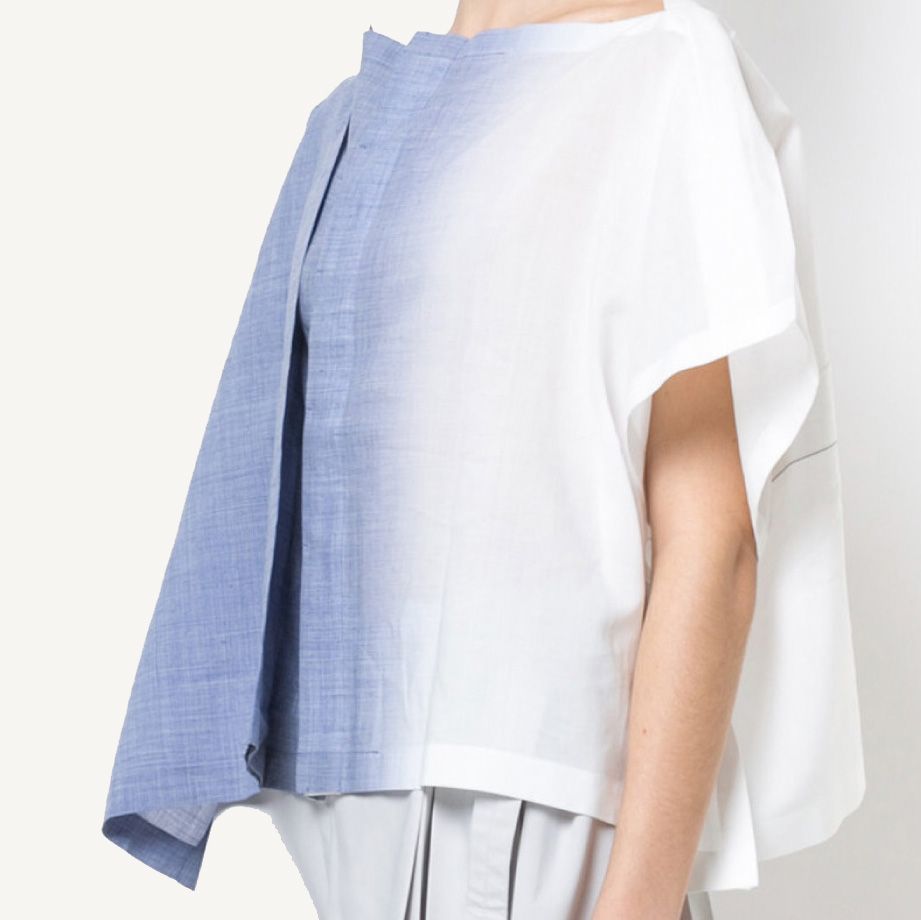 The 132 5 linw refers to the way a piece of cloth (“1D”) takes on a three-dimensional shape (“3D”) and is then folded into a flat surface (“2D”), and the way that wearing it transforms it into a presence that transcends time and dimensions (“5D”). 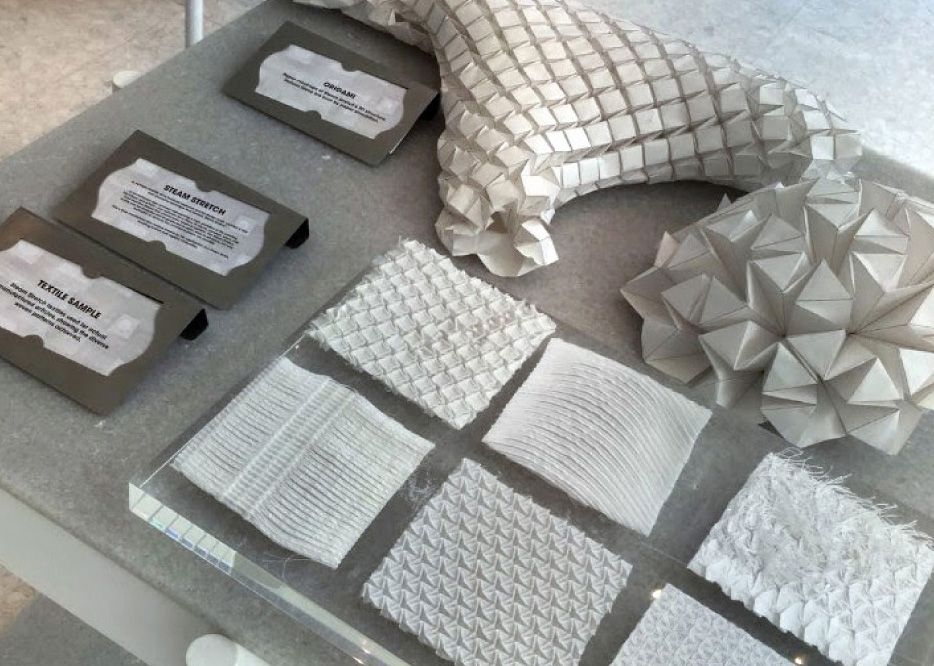 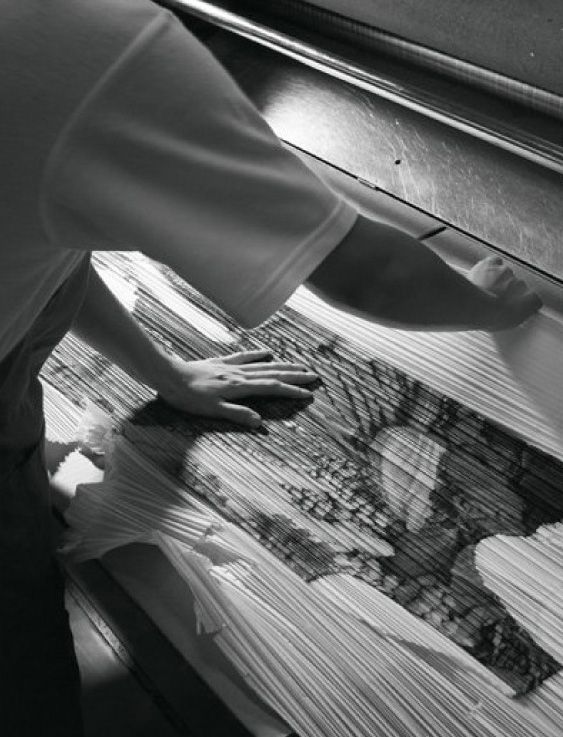 The iconic pleats are made after the garment is sewn together.