There is a wonderful strangeness about certain cities that stem from their political rather than commercial history. Most of the world’s capitals grew organically from their location, frequently adjacent to docks or the banks of a substantial river. Trade and transport dictated which city took the mantle of capital. But, on occasion, a capital is purpose-built. Brasilia immediately comes to mind – a fabulous piece of urban planning, with its streets that resemble an airplane when viewed from the sky, incredible Niemeyer architecture, and neutron-bomb atmosphere after dark. Canberra is another notable example – chosen in 1908 as capital of Australia to avoid favoring either Sydney or Melbourne. It is a city – like Brasilia – populated by diplomats and bureaucrats, monuments and institutional architecture. Like Las Vegas, it might seem as if “real life” doesn’t exist here, but it does.

Canberra has developed a new persona over the years. There was a time when all buildings in the capital had to be white, or at least made of neutrally colored concrete and similarly vanilla materials. There was a kind of harmony with the natural bush setting that the city had been installed within, but the rules were relaxed in the 1980s, and brighter colors have become common. At the same time, there’s more life generally – Hotel Hotel, in the NewActon Nishi building is one of the most striking hotels on the continent, designed by Fender Katsalidis Architects, using recycled timber and concrete. The thousands of beams of timber hanging horizontally in the lobby look like a kind of fabulously exploded installation artwork. It is significant that Gourmet Traveller gave its prestigious award for best bar in Australia 2018 to a much-loved local Canberra business, Bar Rochford, rather than anything in Melbourne or Sydney; the space – with its whitewashed brickwork and poured concrete floor on the first floor of a landmark building on London Circuit – would look handsome in any design-forward global hub. In 2015, the Westside Acton Park – by Cox Architecture – took over a section of abandoned land between Commonwealth Avenue and the West Basin of Lake Burley Griffin. For a deliberately short run of year, the four-story structure housed bars and restaurants and pop-ups and suggested a new way to create life in a city that has previously been all about preordained architecture.

When Canberra was first slated as the new Australian capital, an international competition was staged to assemble potential architects and plans. There were fabulously futuristic suggestions, but it was Chicago landscape architect Walter Griffin who won the bid, suggesting something sympathetic to the bush landscape – there would be hexagonal boulevards and an artificial lake. It would be an entirely planned garden city – green, serene and with no architectural pastiche of Victoriana or similar. All of the buildings would be low-rise, softened by the natural garden setting. This new approach, with an emphasis on the quality of life rather than grand architectural gestures, extended to the way institutions would develop: The first open-plan classrooms, with no fixed desks, were trialed in the schools of Canberra.

Canberra may not match Brasilia for instant architectural wow factor, but it is home to some of the most significant examples of Sydney School architecture in the country, the post-International Style movement that mixed elements of Brutalism with Arts and Crafts, but with a sensibility acutely tuned to its environment – roofs were built that sloped in parallel to the landscape. The 1965 Cater House, by architect Russell Jack, is the most renowned example of the Sydney School in the city.

One of the most exciting things about a new city is the sense of optimism inherent in it. It is the unfurling of a template. It is developing and inspiring. Craig Bassam of BassamFellows spent some of an otherwise nomadic childhood growing up in the city. Some of his earliest memories are from Canberra: “It felt unapologetically modern,” he says. “I enjoyed exploring building sites in my neighborhood and figuring out the split-level plans of the new houses. It led to my pronouncement in 1973 that I would be an architect.” 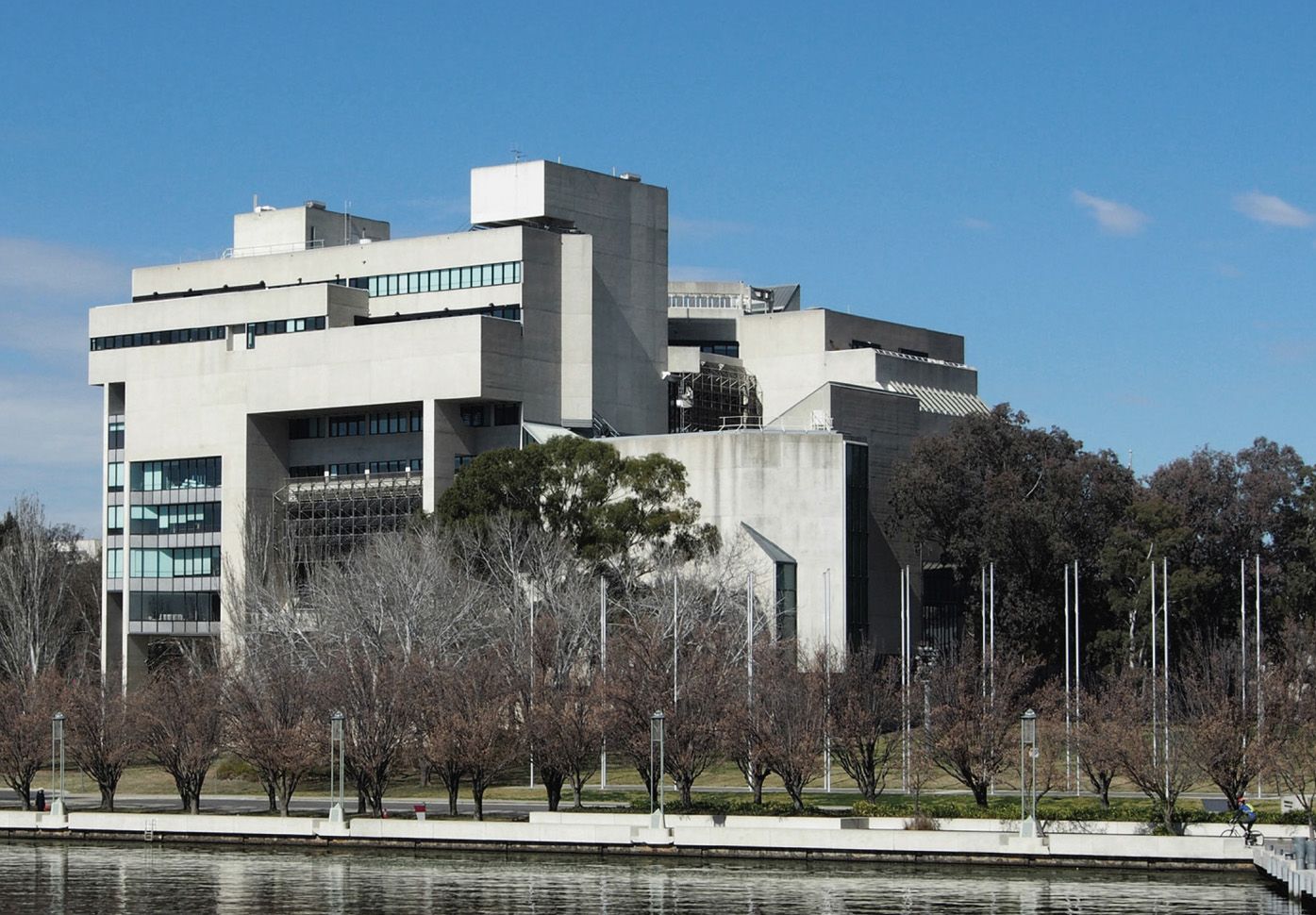 The High Court buiilding designed by architectural firm of Edwards Madigan Torzillo and Briggs in the mid 1970s. An outstanding example of late modern Brutalist architecture. 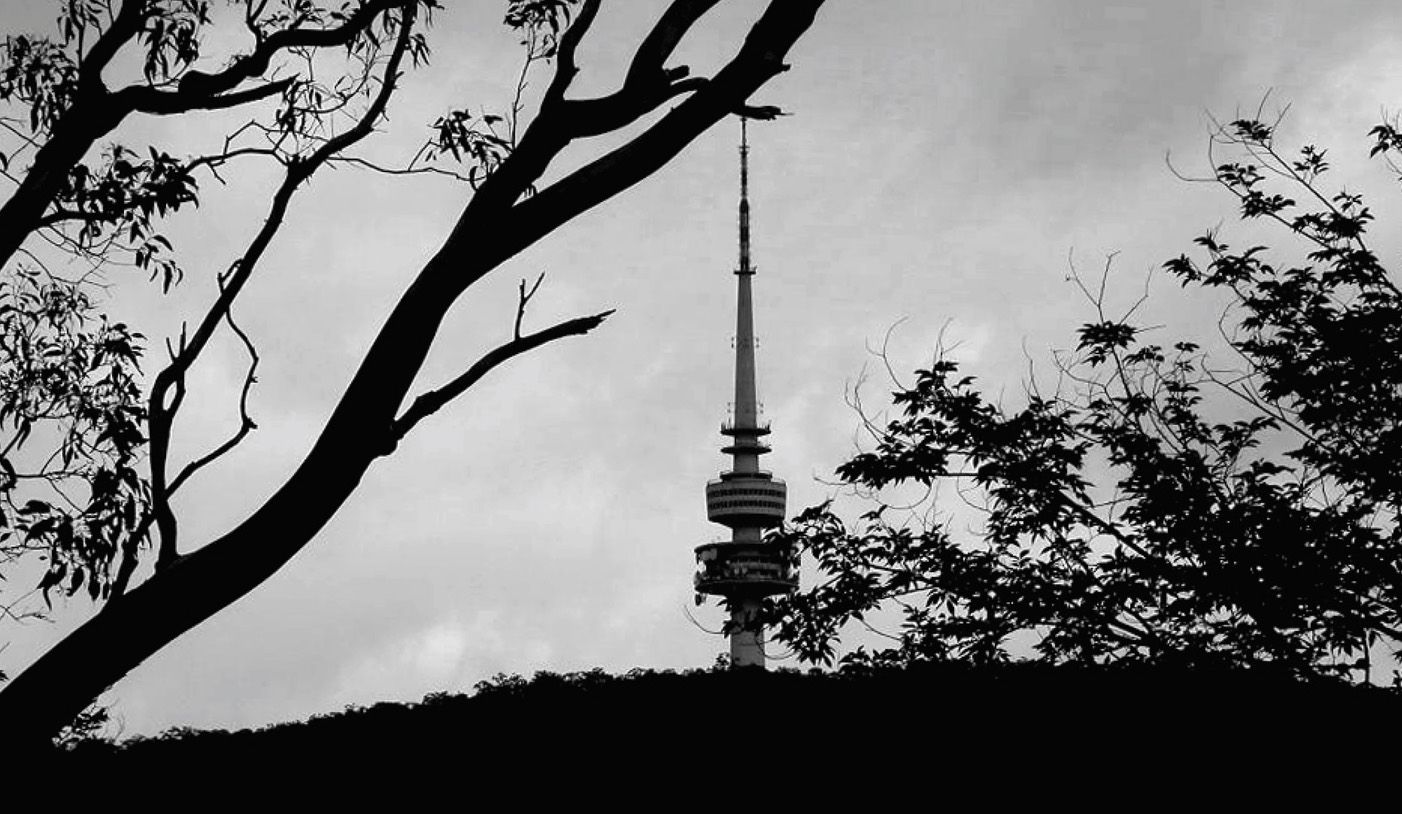 Telstra Tower (1980) is Canberra’s iconic telecommunication tower rising 195.2 meters above the summit of Black Mountain. It offers 360 degree panoramic views of Canberra and its surrounding countryside from an indoor observation deck. 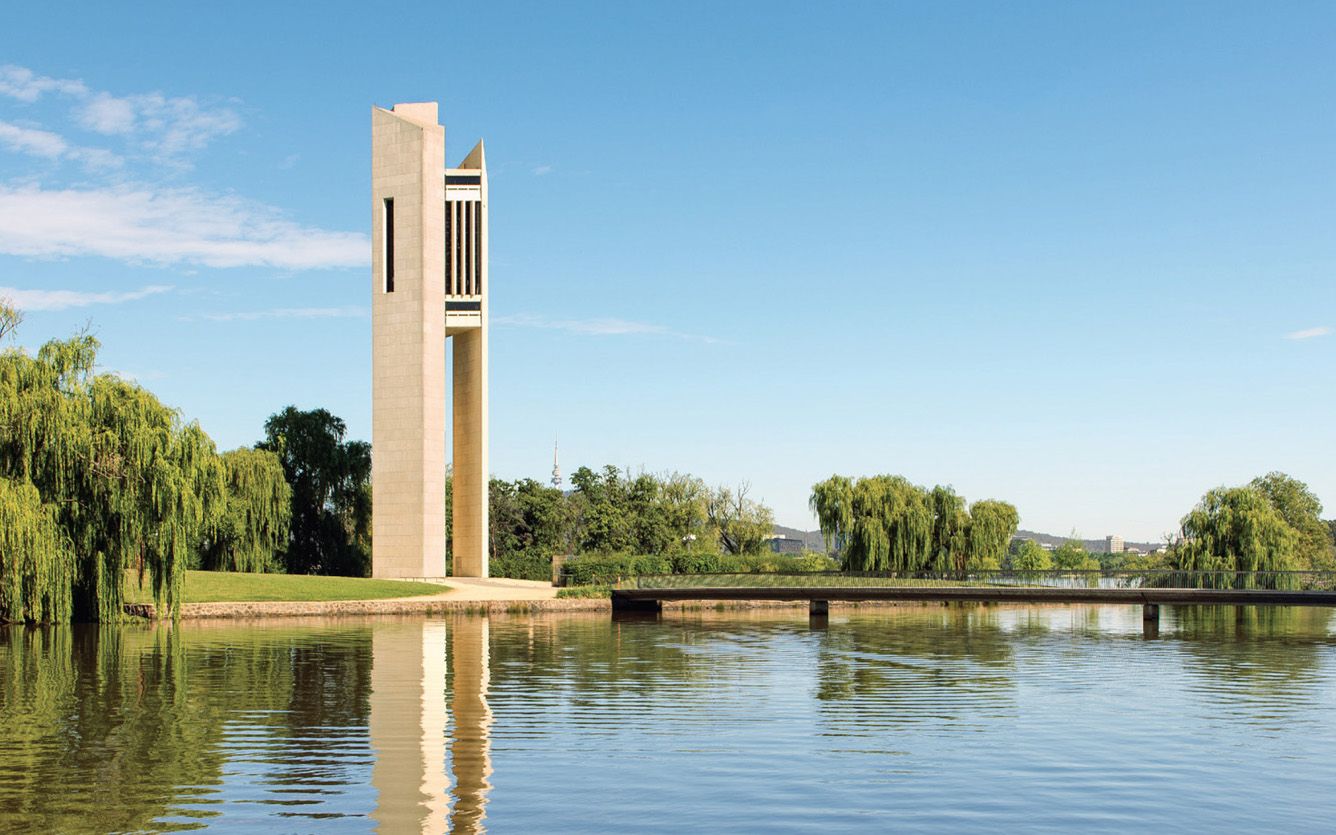 The National Carillon designed by Cameron Chisholm Nicol. It’s in regular use, chiming every quarter-hour and playing a short tune on the hour along with tours and recitals on many days 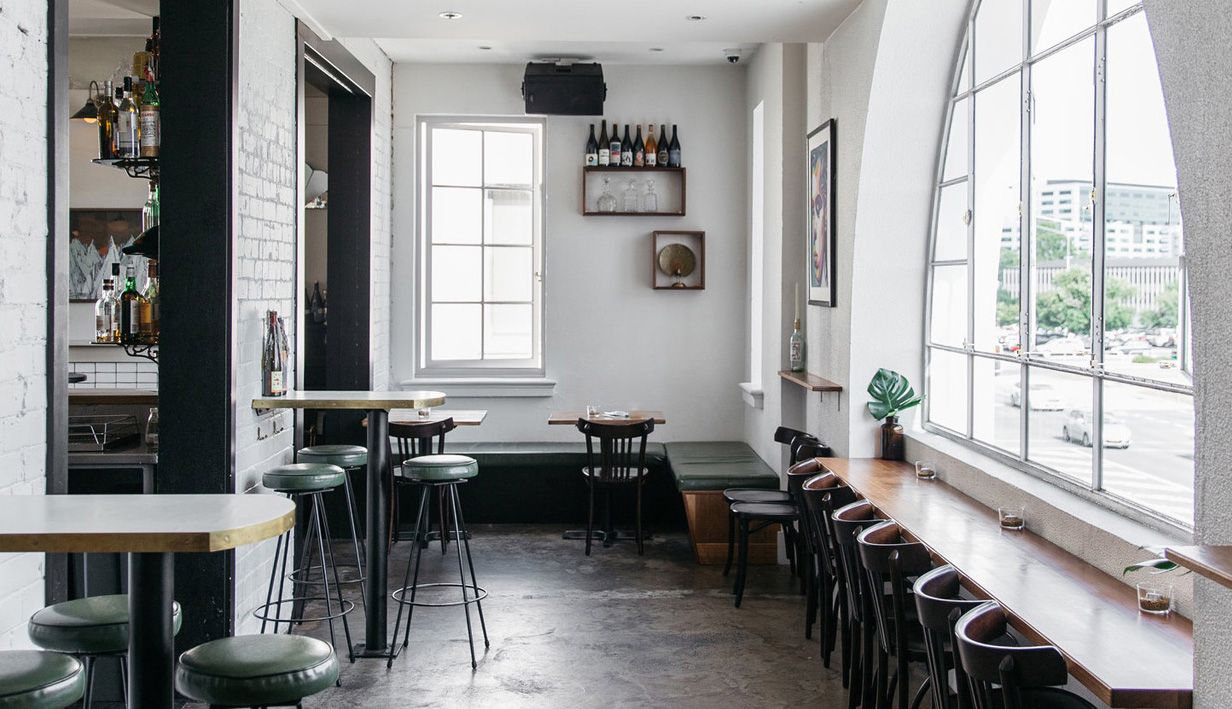 Bar Rochford wine and cocktail bar hidden away in the iconic Melbourne Building. 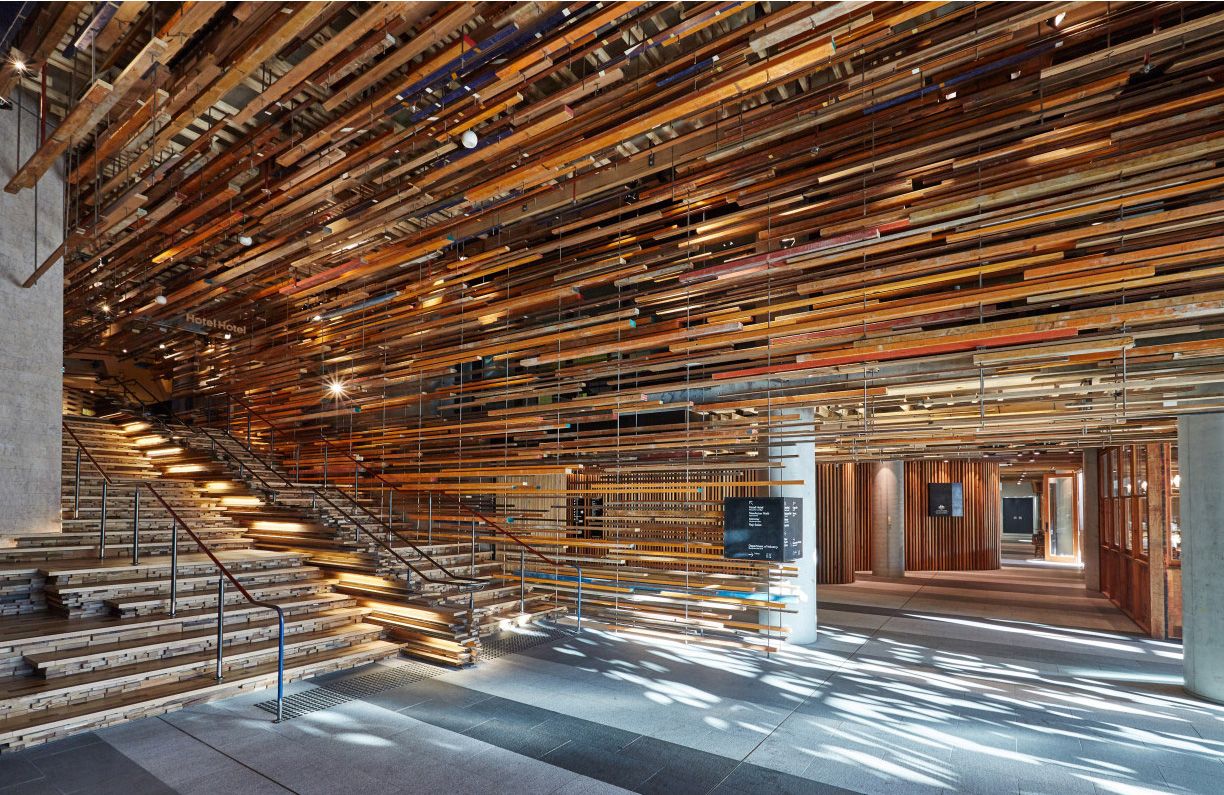 Hotel Hotel designed by Fender Katsalidis Architects, using recycled timber and concrete. The thousands of beams of timber hanging horizontally in the lobby look like a kind of fabulously exploded installation artwork. 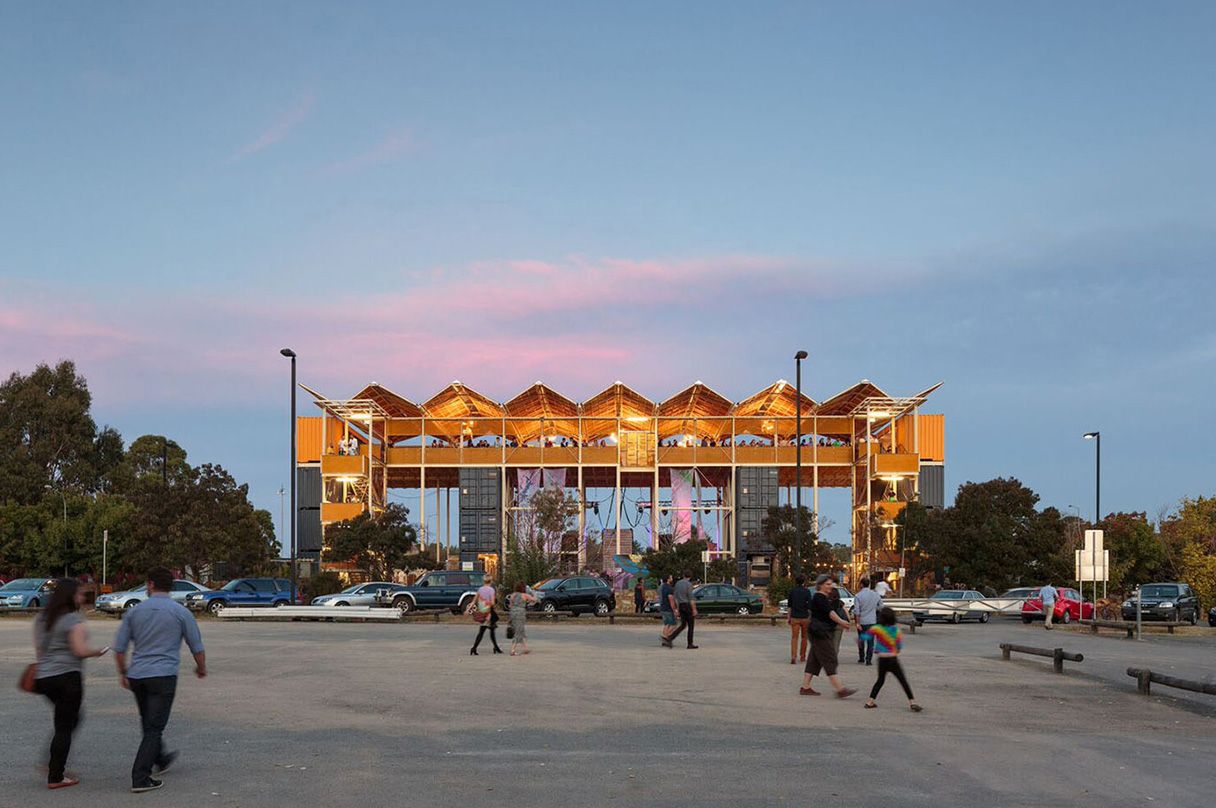 Westside Acton Park concept by Cox Architecture. For a deliberately short run of year, the four-story structure houses bars and restaurants and pop-ups and suggests a new way to create life in a city that has previously been all about preordained architecture. 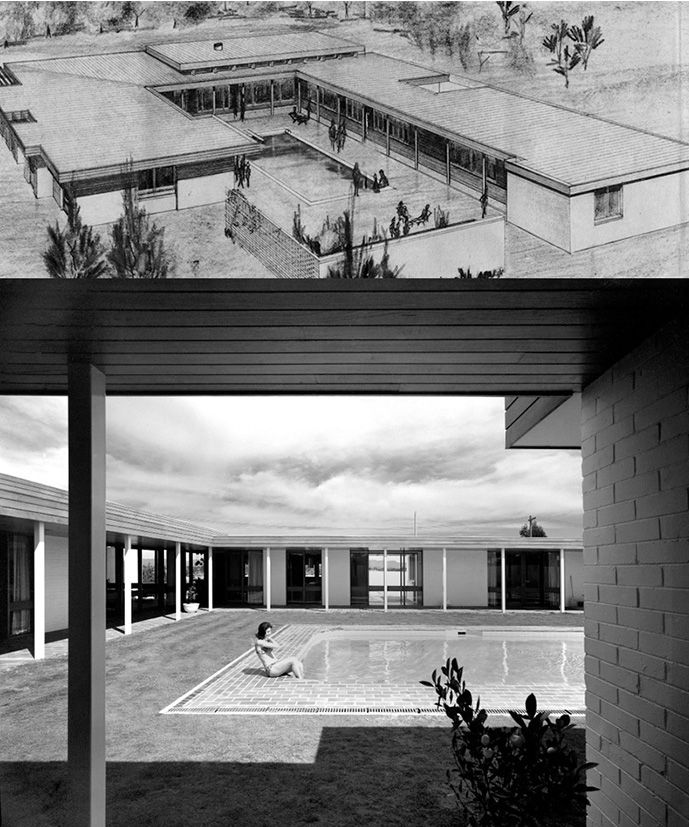 The Birch House. 3 Arkana Street, Yarralumla is a large six bedroom house designed by Noel Potter of Bunning and Madden in 1967. The house was designed to represent a modern version of an Australian homestead—but with the verandas facing inward to a private enclosed courtyard with outdoor living areas and swimming pool, rather than the street. 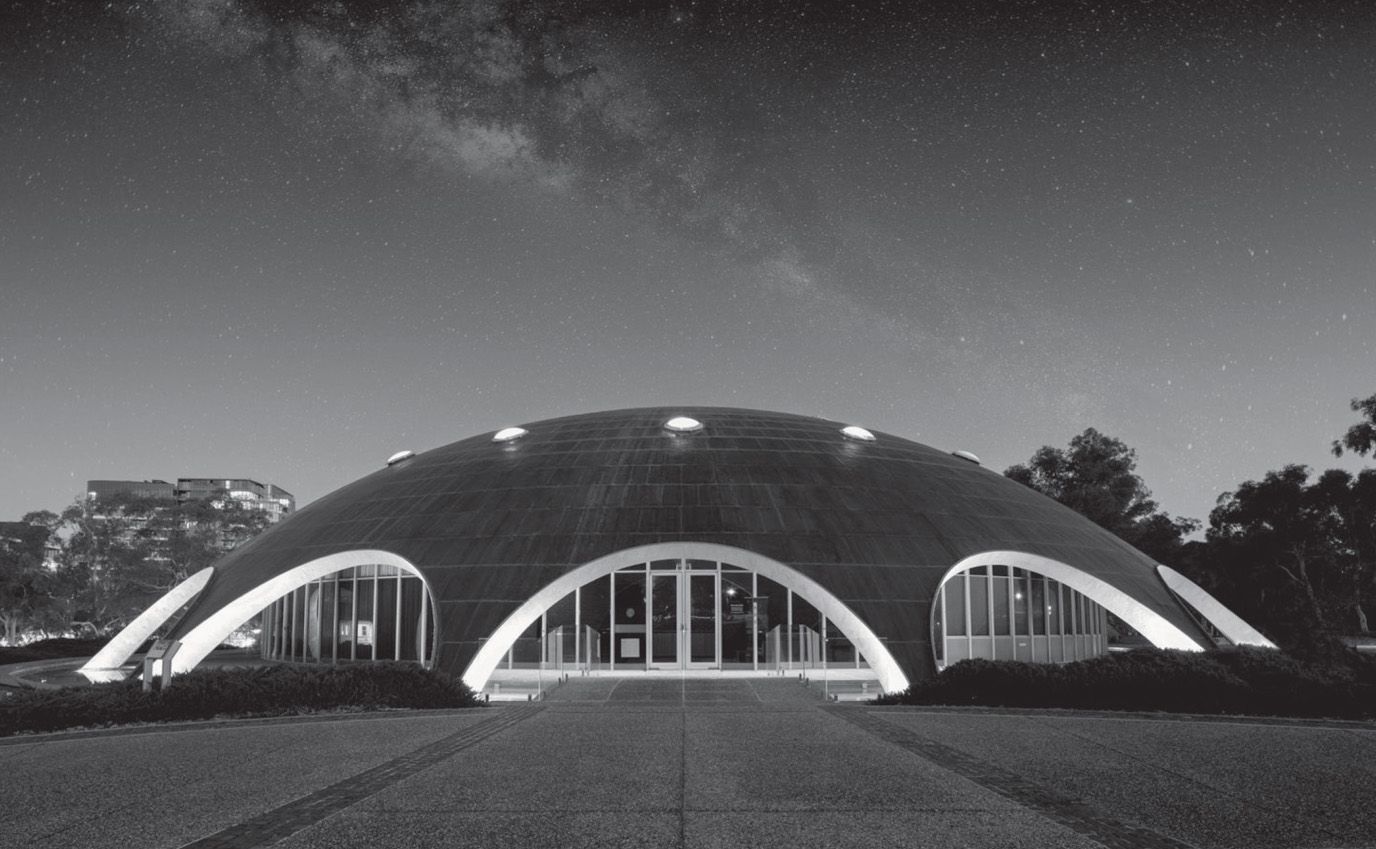 The Australian Academy of Science buidling was designed by Roy Grounds in 1959, and remains one of Australia’s most striking examples of post-war modernism. 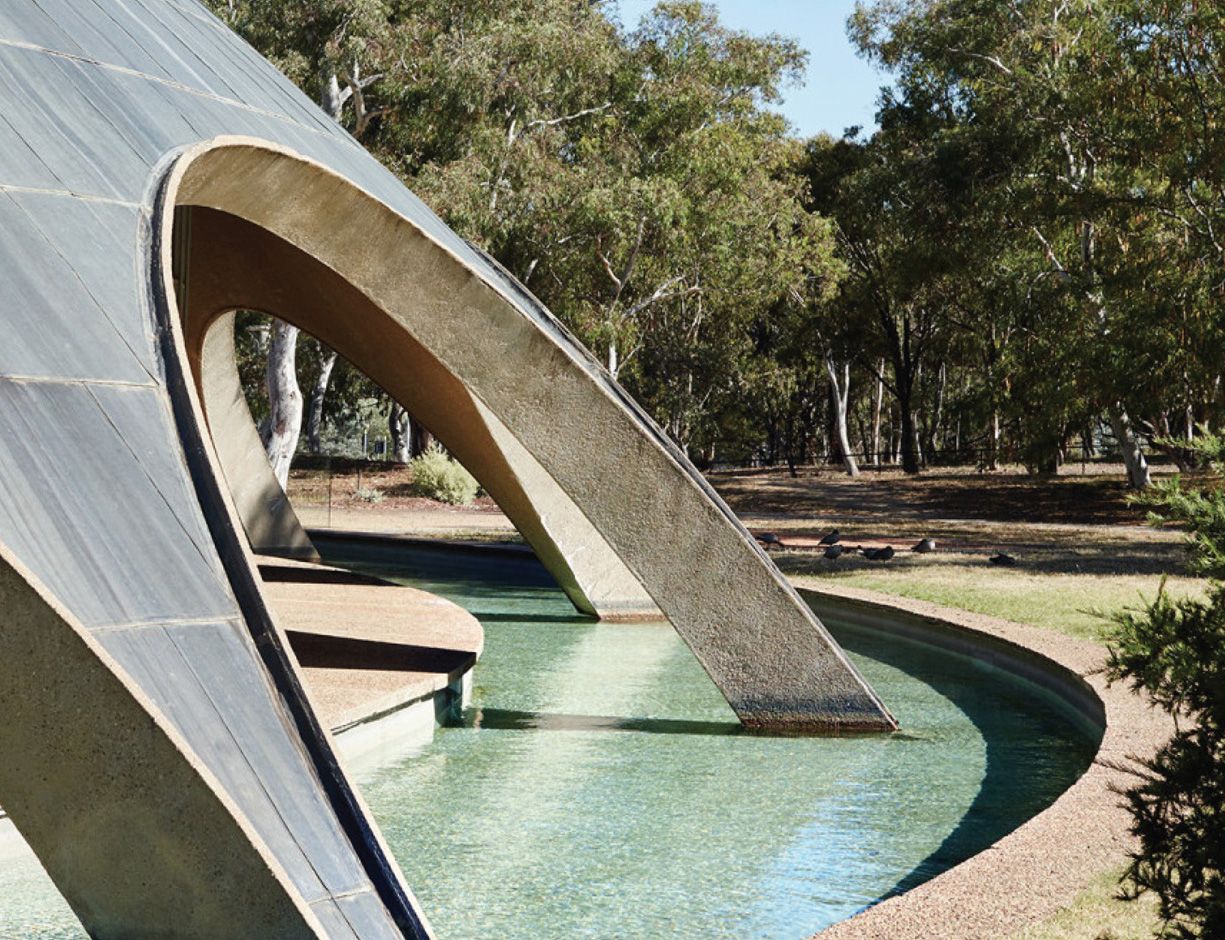 For many years the building has sat virtually unchanged, a geometric monument to science and architecture together. 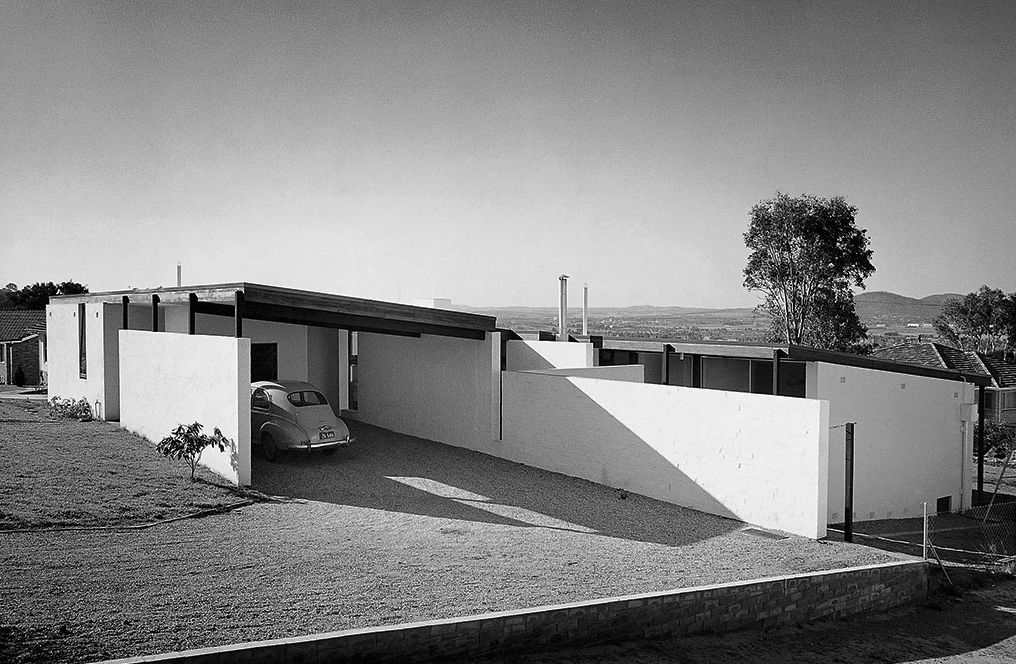 In the Canberra suburb of Red Hill, the Cater House by Russell Jack (1964) exemplifies the Sydney Regional style. Over 50 years on, it’s as fresh and relevant as ever. 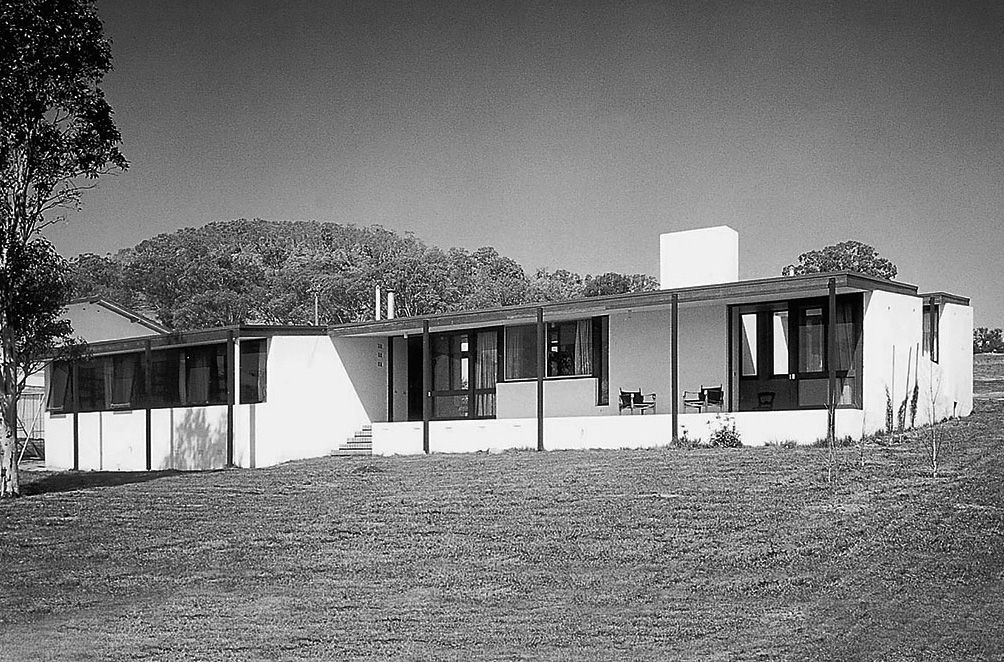 Russel had a great interest in the natural environment, demonstrated by the design of climatic controls, the manipulation of natural light, the orchestration of views and a response to the forms of the landscape. 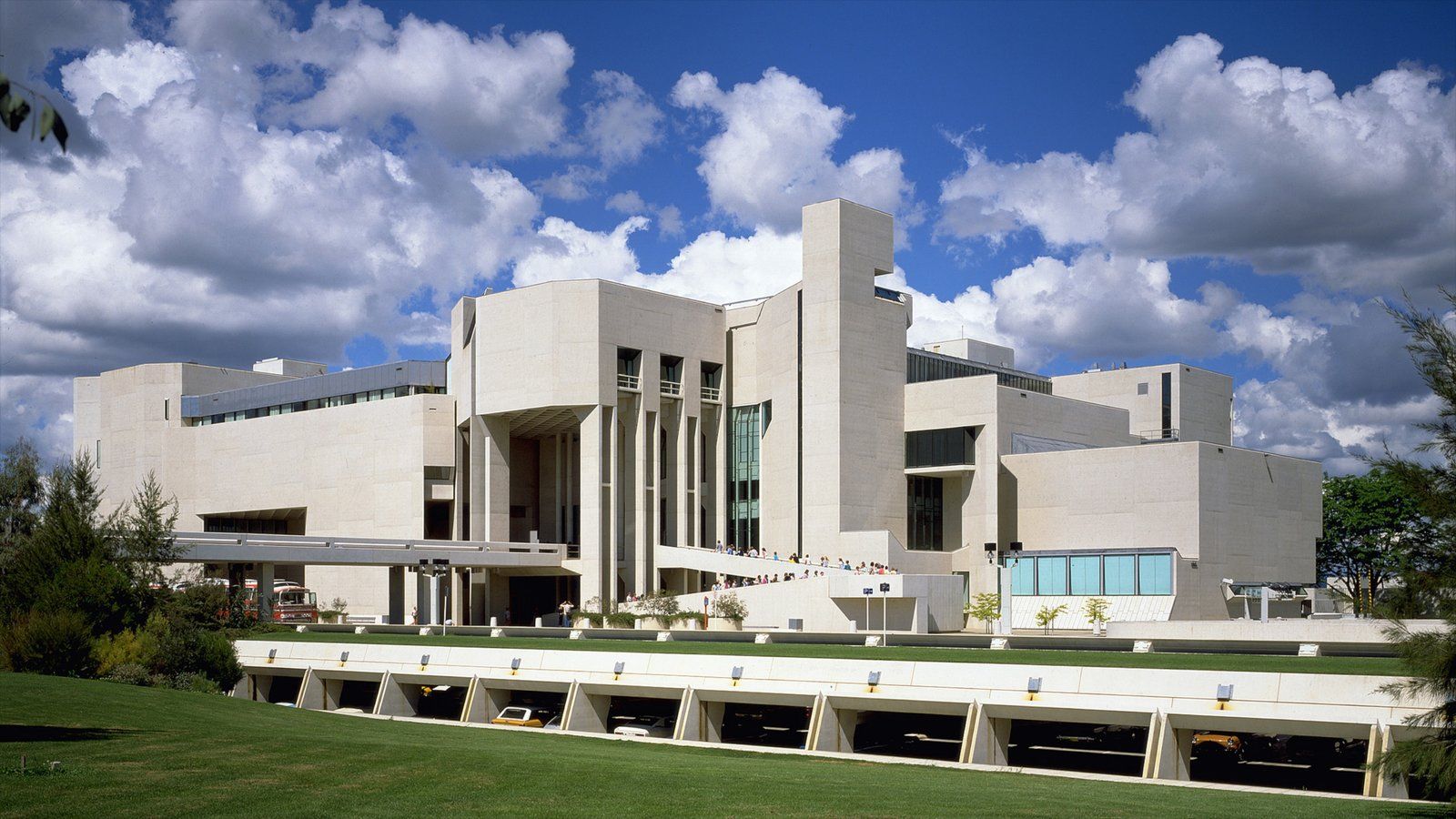 The National Gallery is characterised by angular masses and raw concrete surfaces and is surrounded by a series of sculpture gardens planted with Australian native plants and trees. 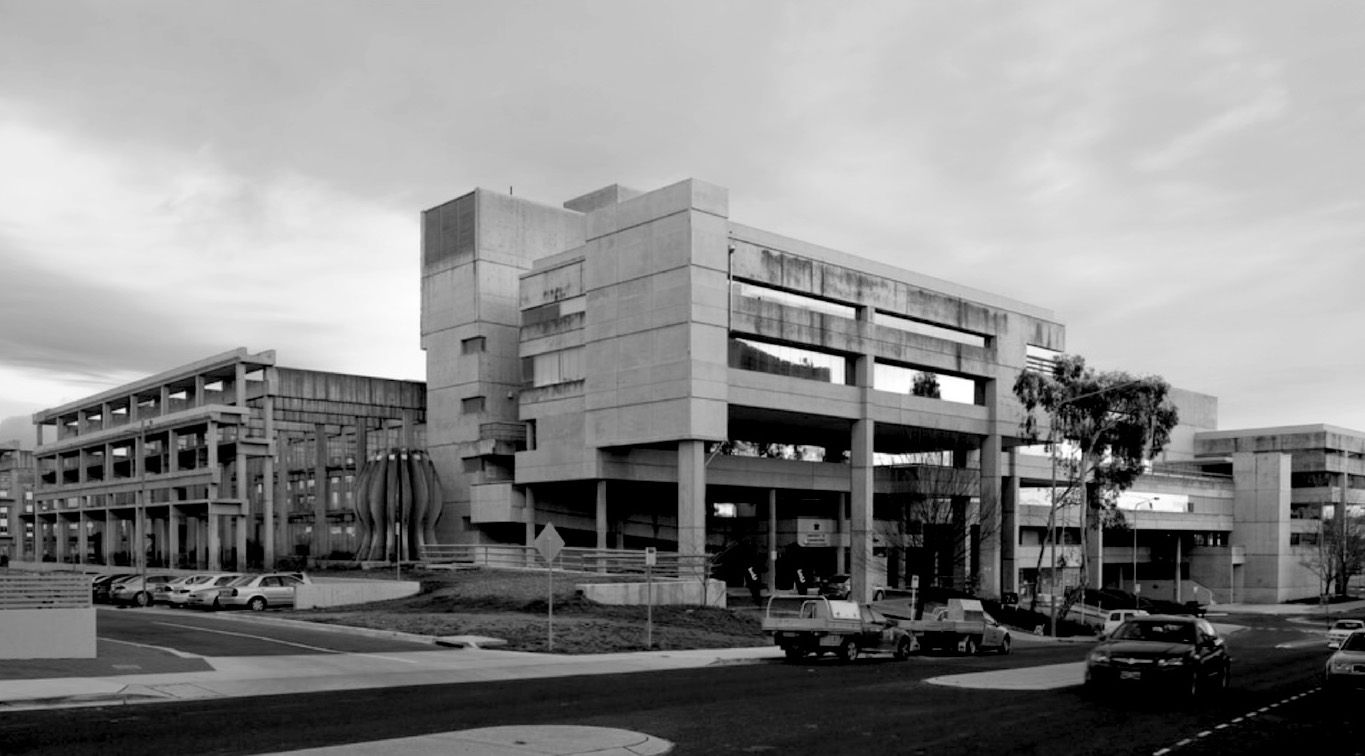 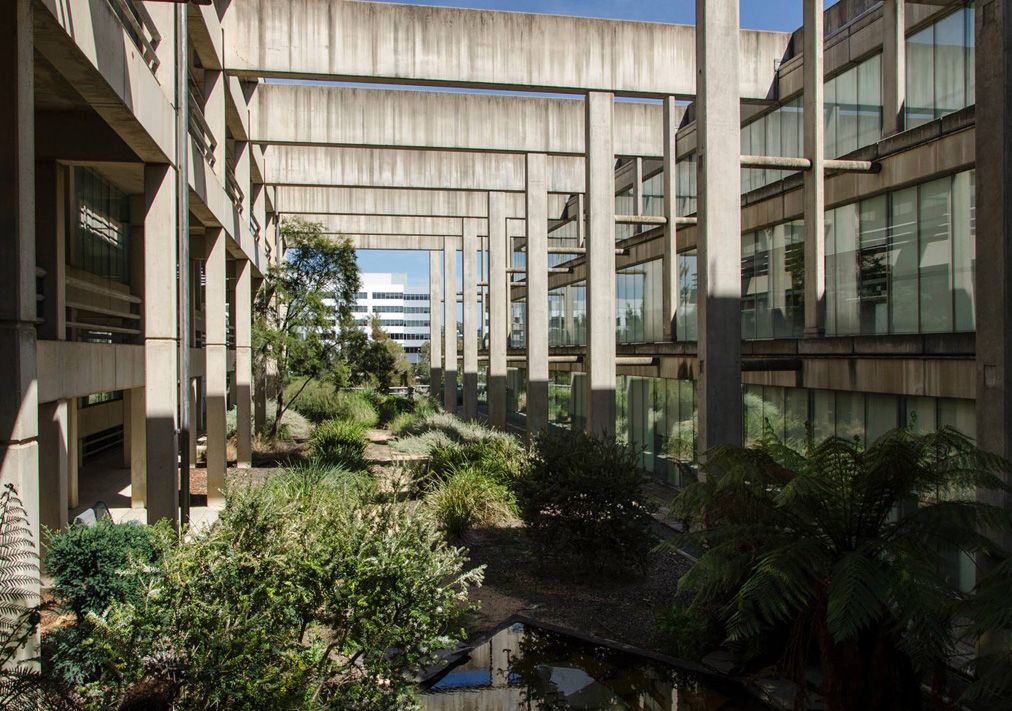 The office complex is Canberra’s, and it appears Australia’s, first and possibly only true architectural example of “Structuralism” where buildings are integral and contributing elements of an overall urban order rather than separate and individual elements. 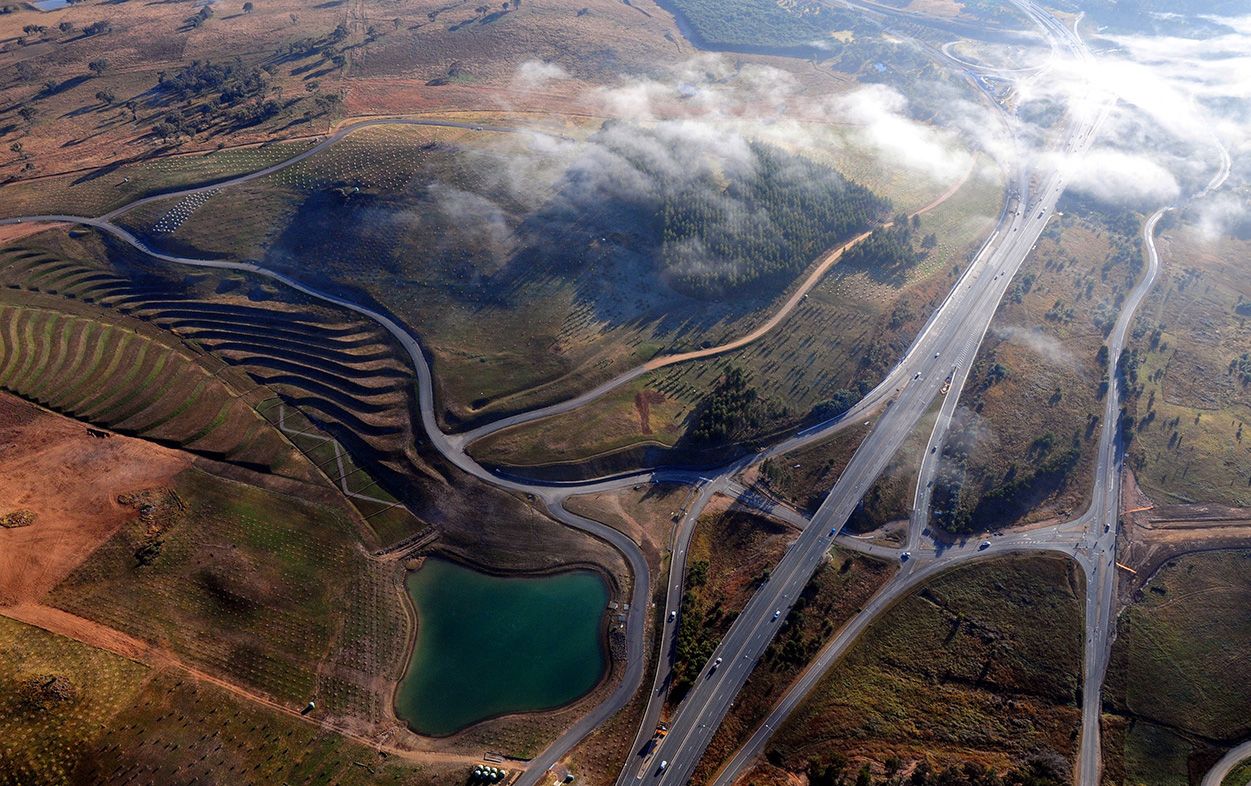 The Tuggeranong Parkway. From the suburbs to the capital in no time. 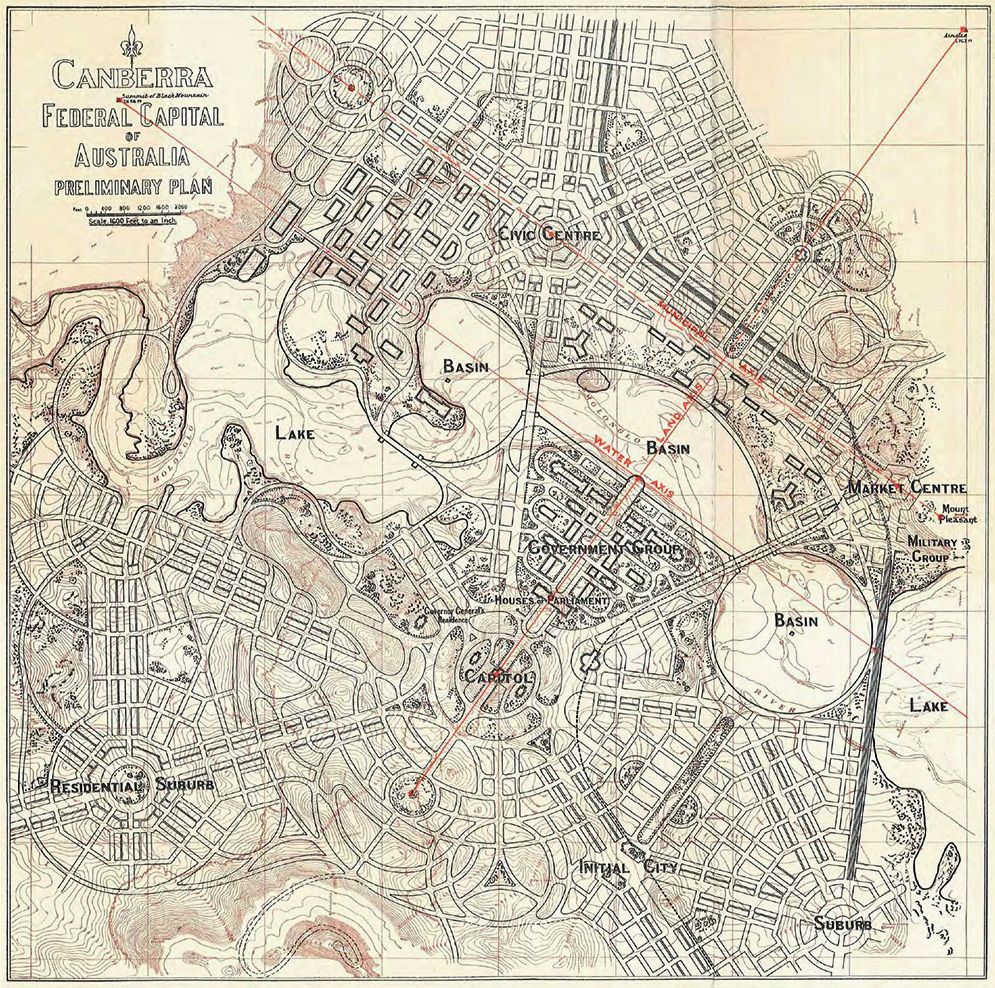 Chicago landscape architect Walter Griffin suggested something sympathetic to the bush landscape – there would be hexagonal boulevards and an artificial lake.

One of the most exciting things about a new city is the sense of optimism inherent in it. It is the unfurling of a template. It is developing and inspiring