One of the most dynamic visual aspects of the 23,000 square foot Starbucks Reserve Roastery that opened in New York’s Meatpacking District in early December 2018, was inspired by a single simple pebble. When BassamFellows was approached by the Chief Design Officer of Starbucks, Liz Muller, to collaborate on the look of the fourth in the brand’s collection of extraordinary Reserve Roastery spaces, architect Craig Bassam found himself returning again and again to a small, pleasingly shaped pebble he had picked up while walking on the beach on Cape Cod. It had been sitting on his desk for some time and served as a kind of organic stress ball – something tactile and pleasing to turn around in his hand, but also to inspire visually, like a kind of incidental, miniature Henry Moore.

The result of the collaboration with Muller is a set of ten designs, including four tables, two lounge chairs and four stools that have been arranged in strategic formations at the New York interior to create a superlative client experience. These are all designs that will ultimately become part of the BassamFellows canon and follow in the heritage of numerous architects creating bespoke elements with longevity, with their origins in commercial hospitality: Gio Ponti for the Parco dei Principi, Arne Jacobsen for the SAS Royal Hotel, Marc Newson for Oliver Peyton’s seminal London restaurants Mash and Coast, etc. For its last Roastery project in Milan, Starbucks commissioned Cassina to create original designs in collaboration with Patricia Urquiola, so the choice of BassamFellows for the New York flagship is apposite.

Muller’s blueprints for the Manhattan project were overtly industrial, with strong squared shapes and sharp lines in an almost entirely open plan space. Given the location, it had been conceived as a fitting riposte to the earlier Reserve Roastery project in Milan, which featured Palladiana-style mosaic floors, and marbles that had previously only been seen in the construction of the Duomo and the surrounding piazza. For New York City BassamFellows conceived a set of furniture that would look organic and harmonious, sculptural and natural, allowing for different groupings throughout the day. Each of the pieces of furniture work as an abstract design statement in itself, but they also work together as a strong contemporary collection.

The development process for all of the pieces currently showcased at 61 Ninth Avenue was extraordinarily demanding.

The Pebble Stool, which harks back to the object that still sits on Craig Bassam’s desk, looks like one of the simplest pieces in the set, but was one of the most complex to develop. It comes in a carved Walnut version and an upholstered version, Pebble Padded. Numerous prototypes were worked on, with incremental changes to the sculptural shape – the finished Pebble Stool was the result of a final tweak of 10mm in the tilt to create optimum comfort, while Pebble Padded went through numerous changes in the upholstery detailing, with as few seams as possible. Rounding out the series is the Pebble Lounge Chair, an ample, fully carved Walnut chair – both highly tactile and grounding.

The Trigon Tables utilize triangular shapes to provide a directional edge for lounge seating while allowing better clustering. Softened edges create a “guitar pick” shape in keeping with the more abstract, sculptural nature of the rest of the collection. In both carved wood and copper finished metal versions, the metal side table was the result of numerous experiments to get the optimum balance right between the top, super thin pedestal and thick steel base plate.

The Slink Lounge Chair required multiple prototypes and work with specialist technicians to create a thin, elegant padded shell. The result is something that is pared back, visually light, extremely durable and strong, and incredibly comfortable.

The Tri-Ped Table was conceived of as a striking, organic-looking piece of sculpture that also functions as furniture – three units can be put together to create a single entity, or separated to be used as distinct tables. This is a piece of design that called on forensic architectural planning to ensure total stability despite the ambitious dimensions of the table surface in relation to its support.

Finally, The Cluster Stool represents a groundbreaking piece of modular furniture. Like the Tri-Ped Table, it is essentially a functional sculpture. Groups can be stacked together for storage when they aren’t needed, and the larger the group the bigger the visual impact. The storage doesn’t need to be hidden from view. Following in the tradition of the Artek Stool or the Ercol Stacking Chair, this is a complex piece of engineering that looks simple and elegant, but also offers a high level of comfort. Like the rest of this new collection by BassamFellows, it is a modern classic. 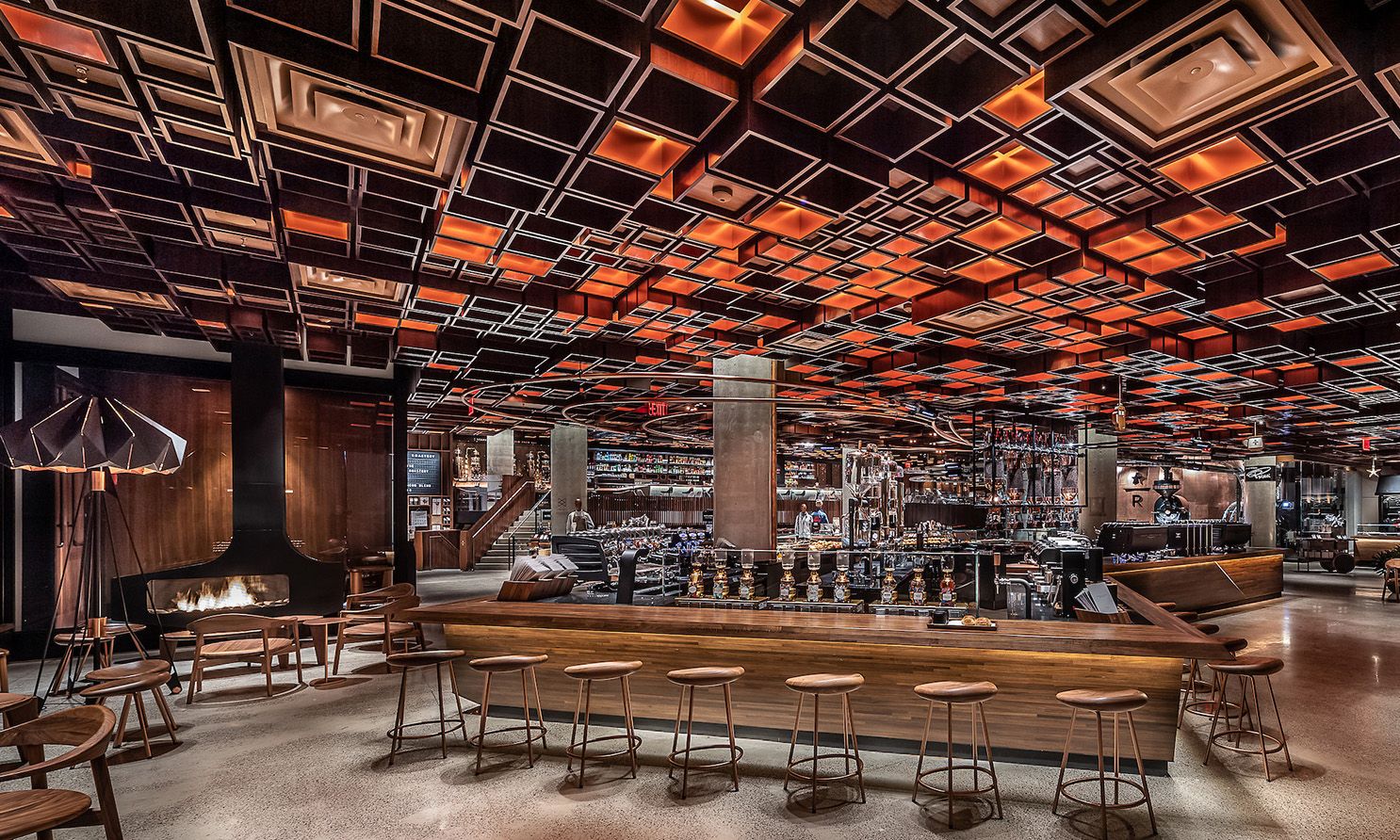 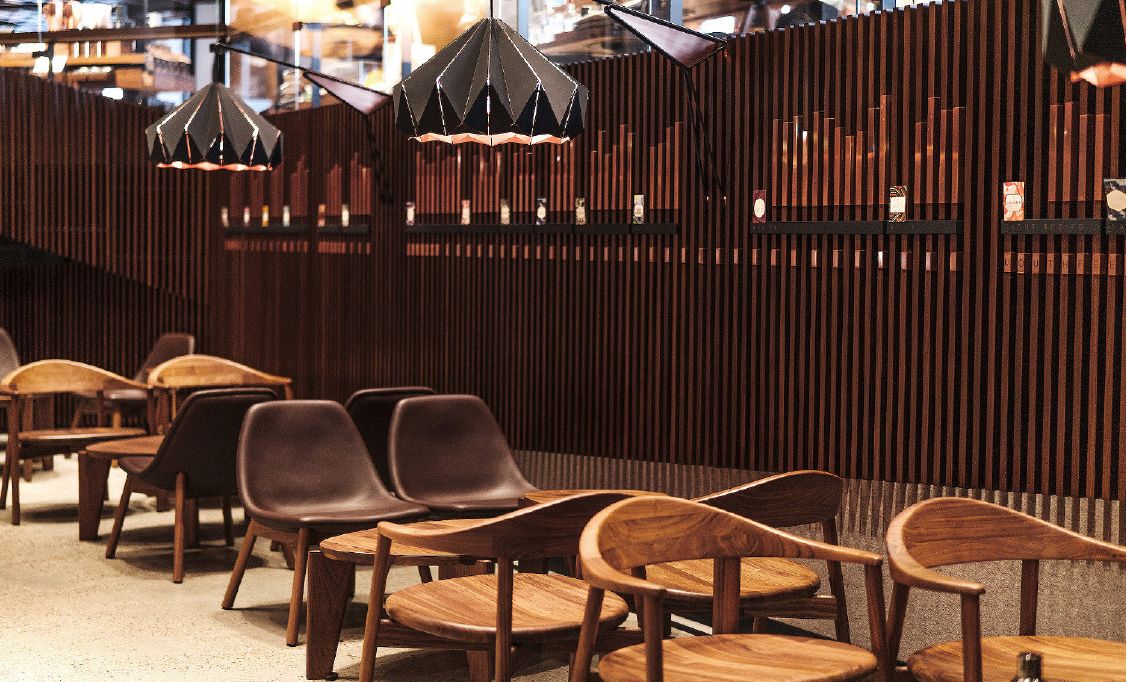 BassamFellows designed all the furniture for the Roastery. 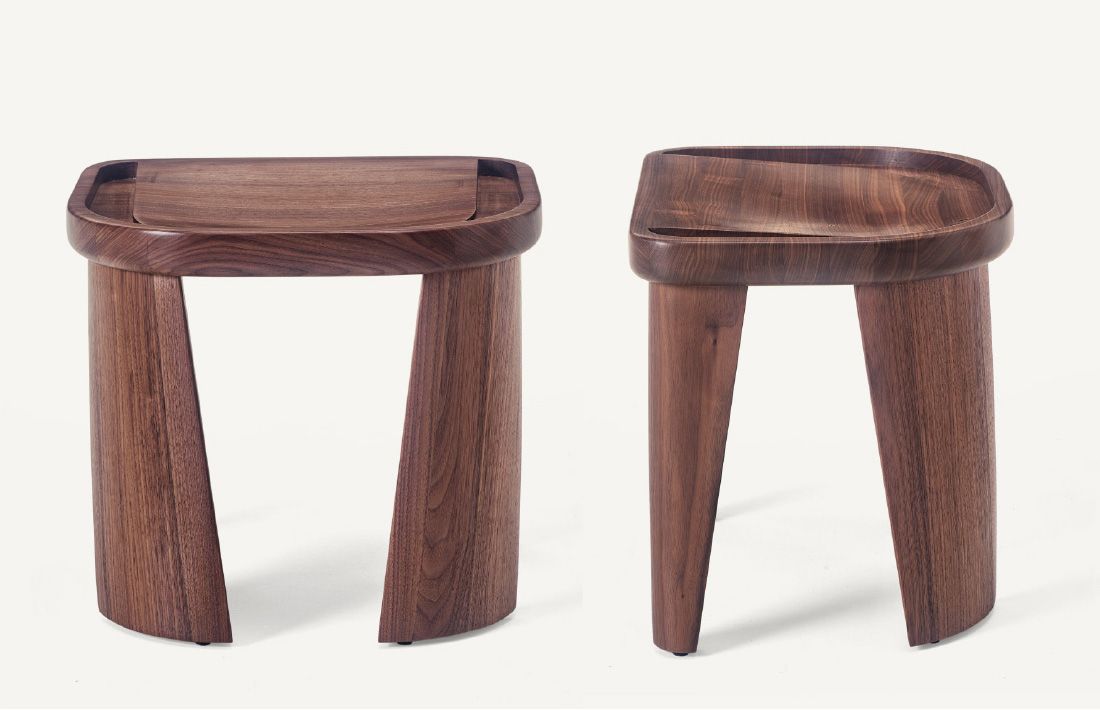 The Cluster Stool is piece of modular furniture and also a functional sculpture. 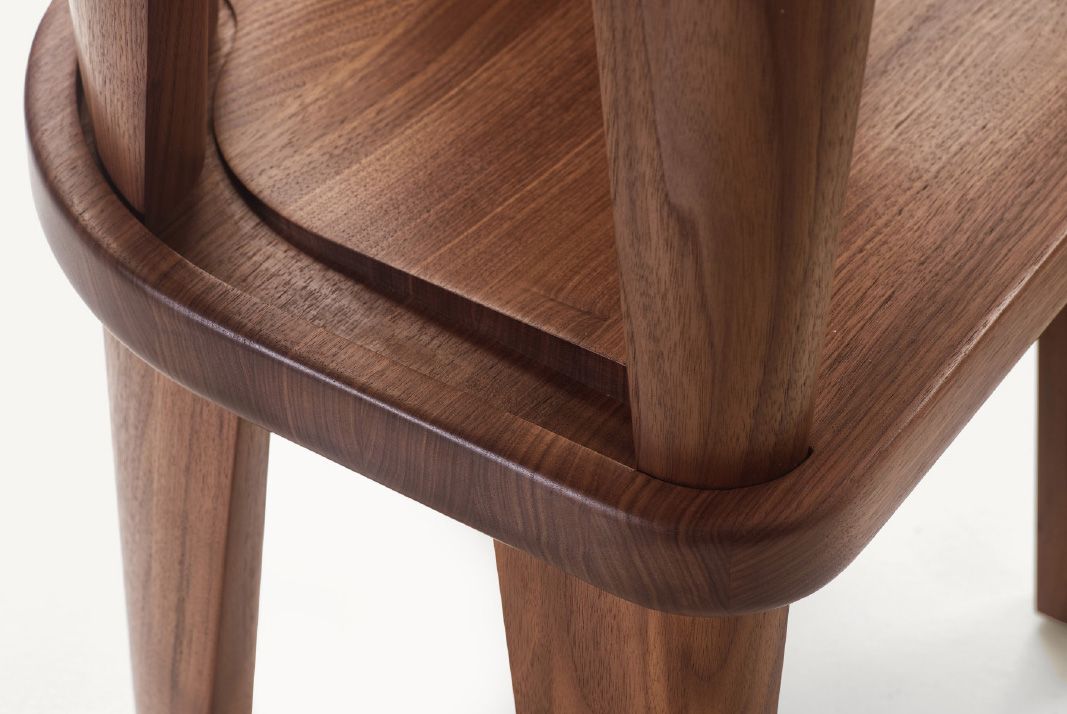 Stools can be stacked together for storage when they aren’t needed, the larger the group the bigger the visual impact. 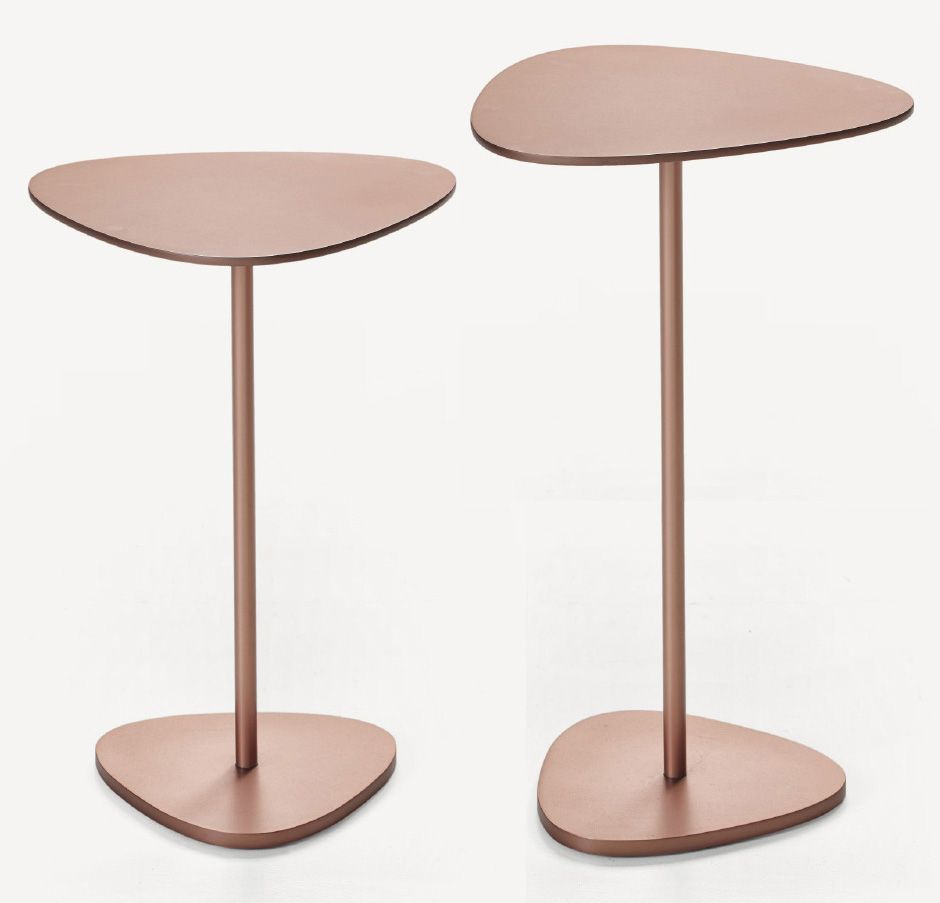 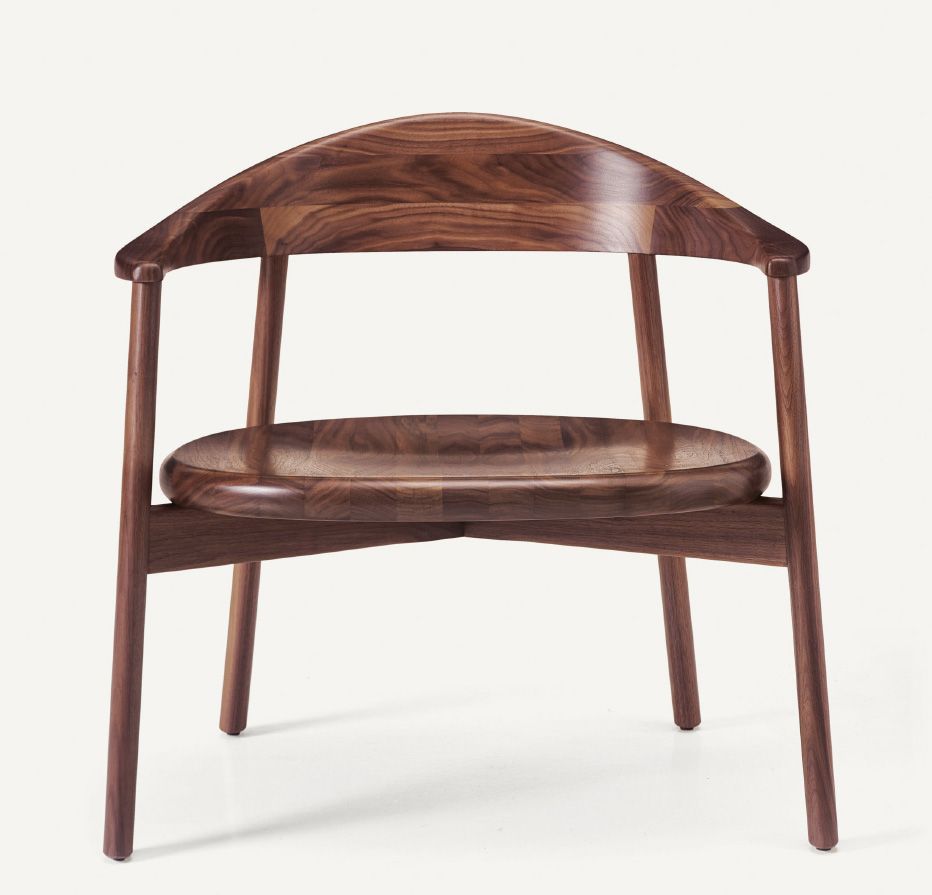 The Pebble Lounge Chair anchors the lounge spaces throughout the space. 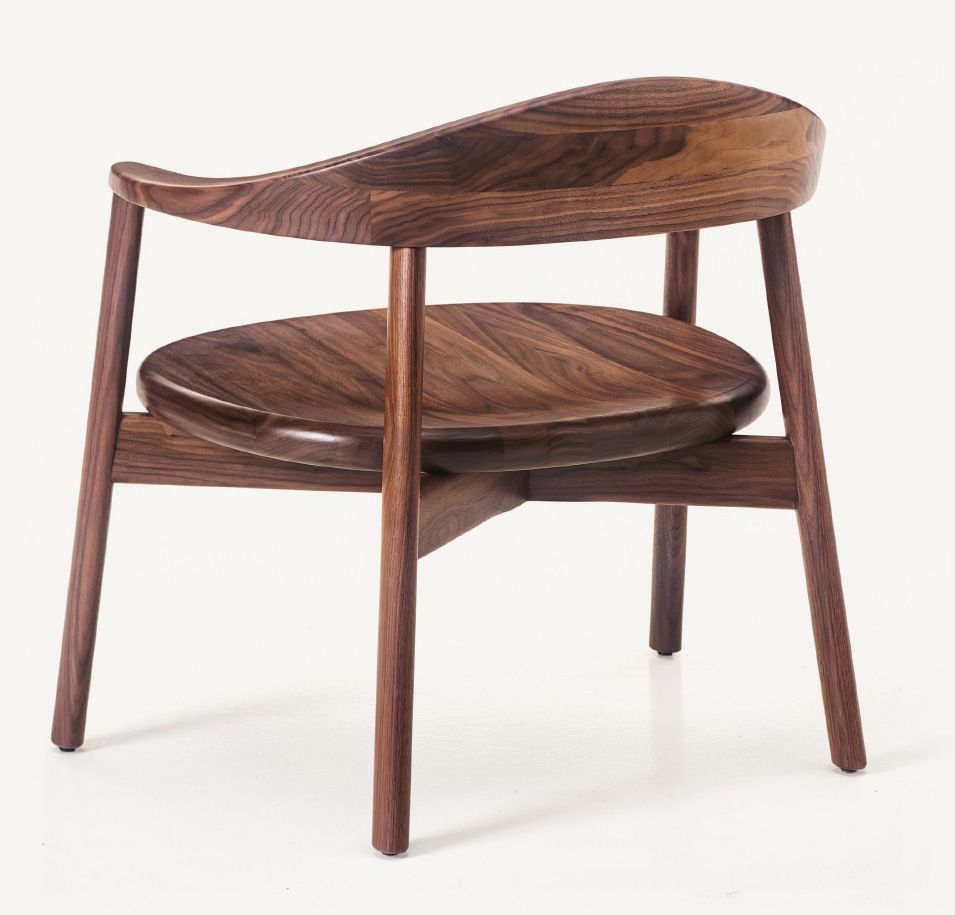 The Pebble Lounge Chair is carved from solid Walnut. The softened edges and shaped seat are highly tactile and supremely comfortable. 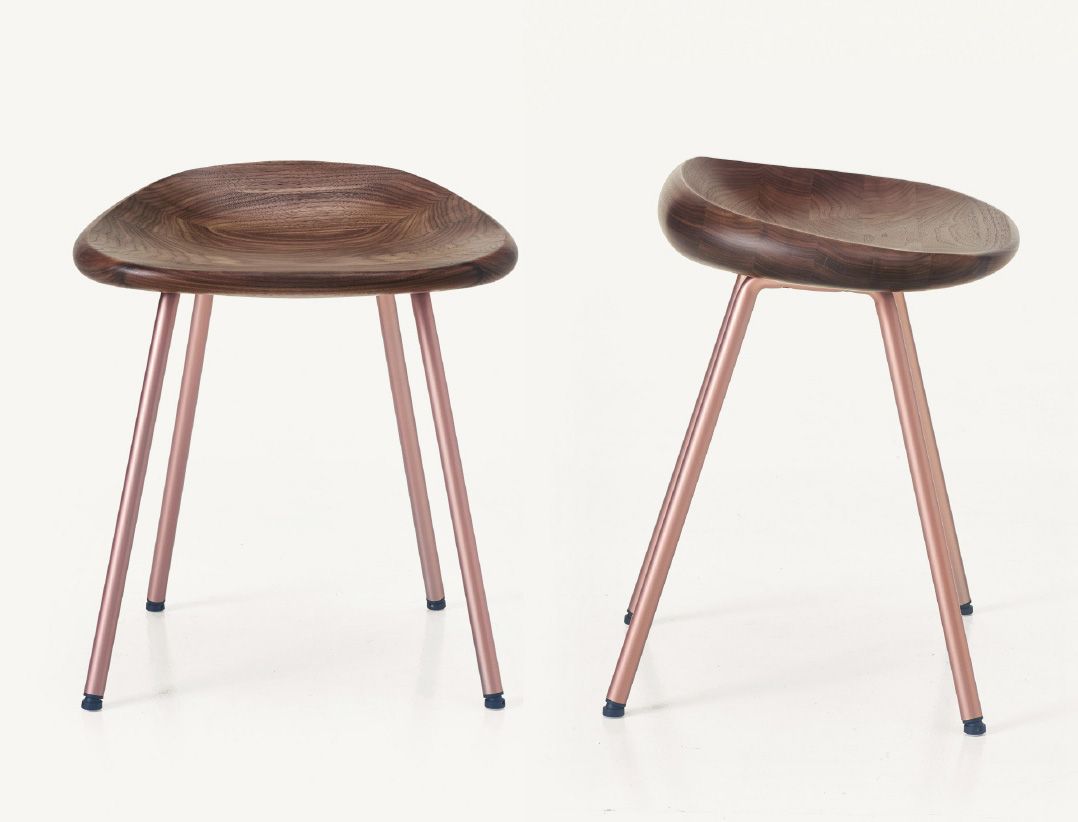 The Pebble Stool is the signature piece of the collection. Craig Bassam found inspiration from a small, pleasingly shaped pebble he had picked up on the beach on Cape Cod. 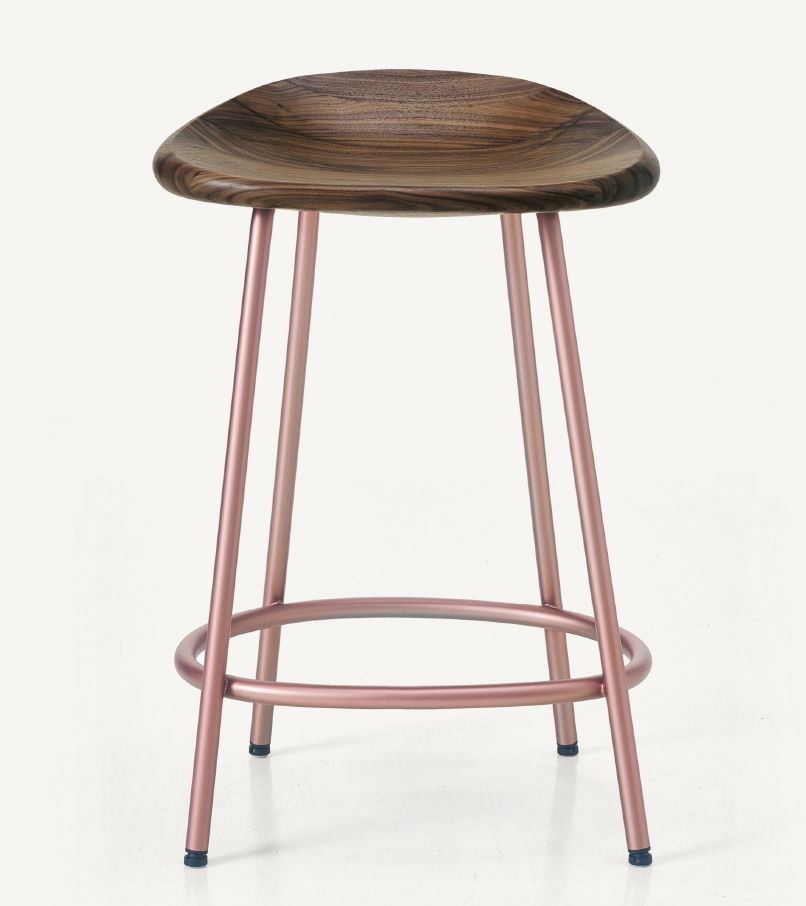 The bars are the stars at the New York Roastery. The Pebble Counter Stool is meant to be instantly recognizable and friendly. 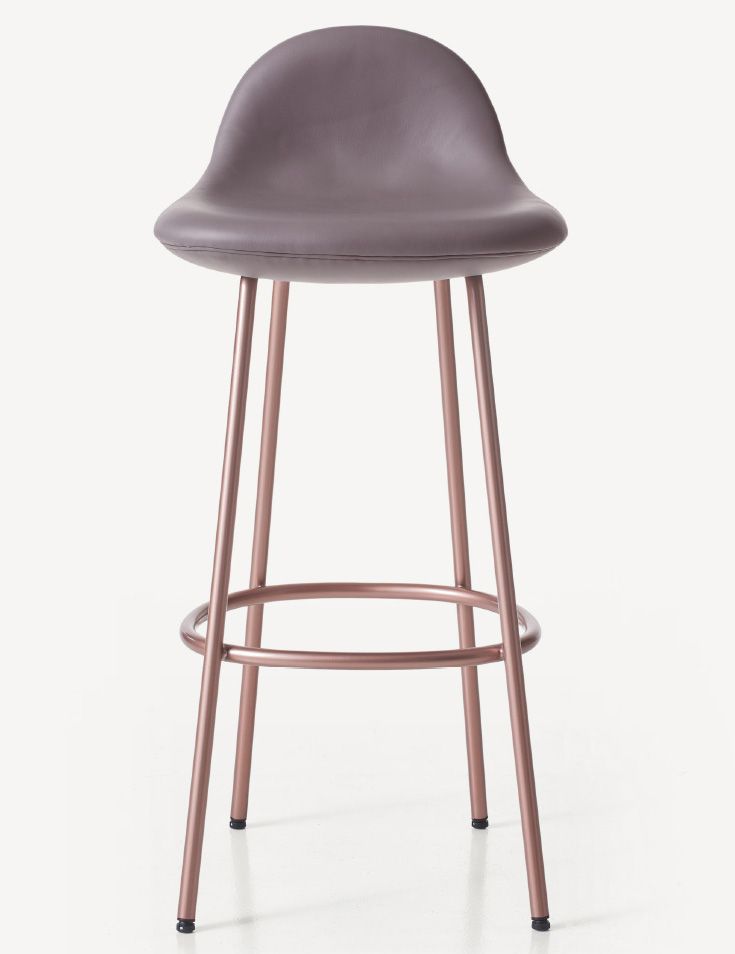 The Pebble Padded Bar Stools add a soft touch with minimal seaming to the Arriviamo Bar. 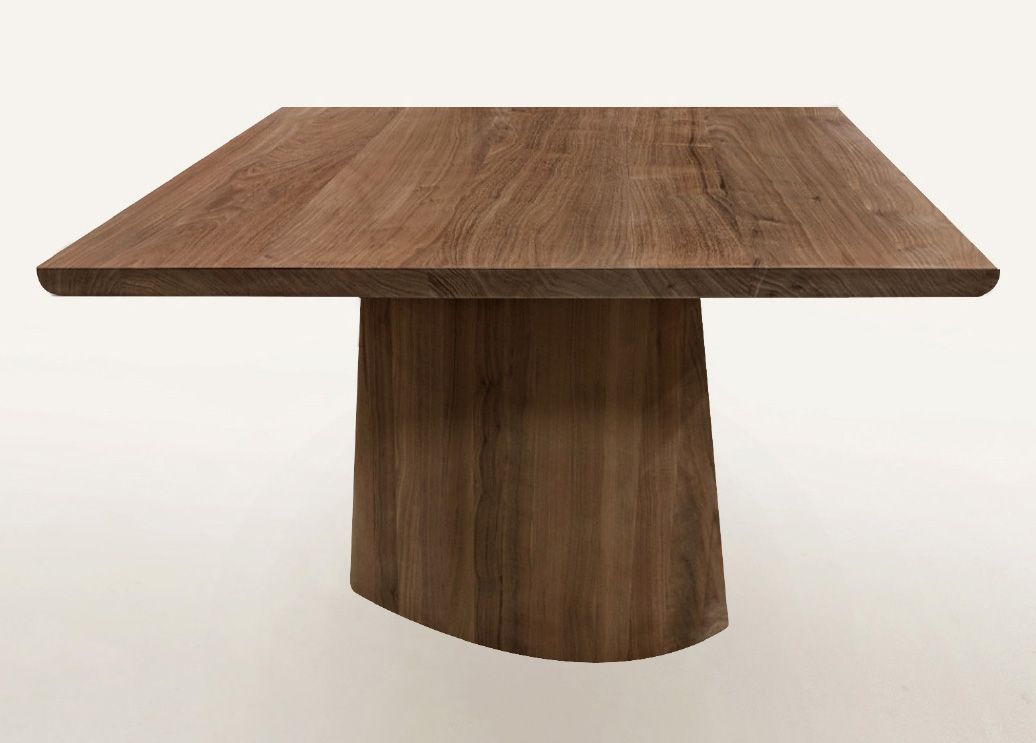 The Tri-Ped Table was conceived of as a striking, organic-looking piece of sculpture that also functions as furniture. 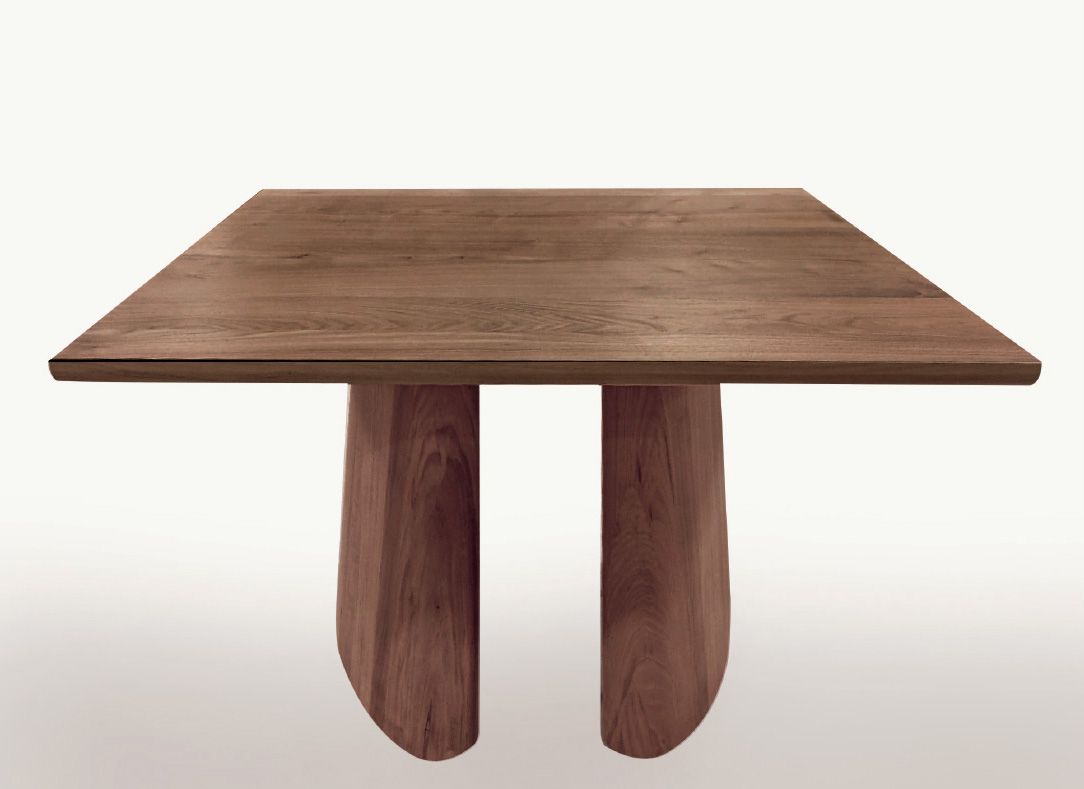 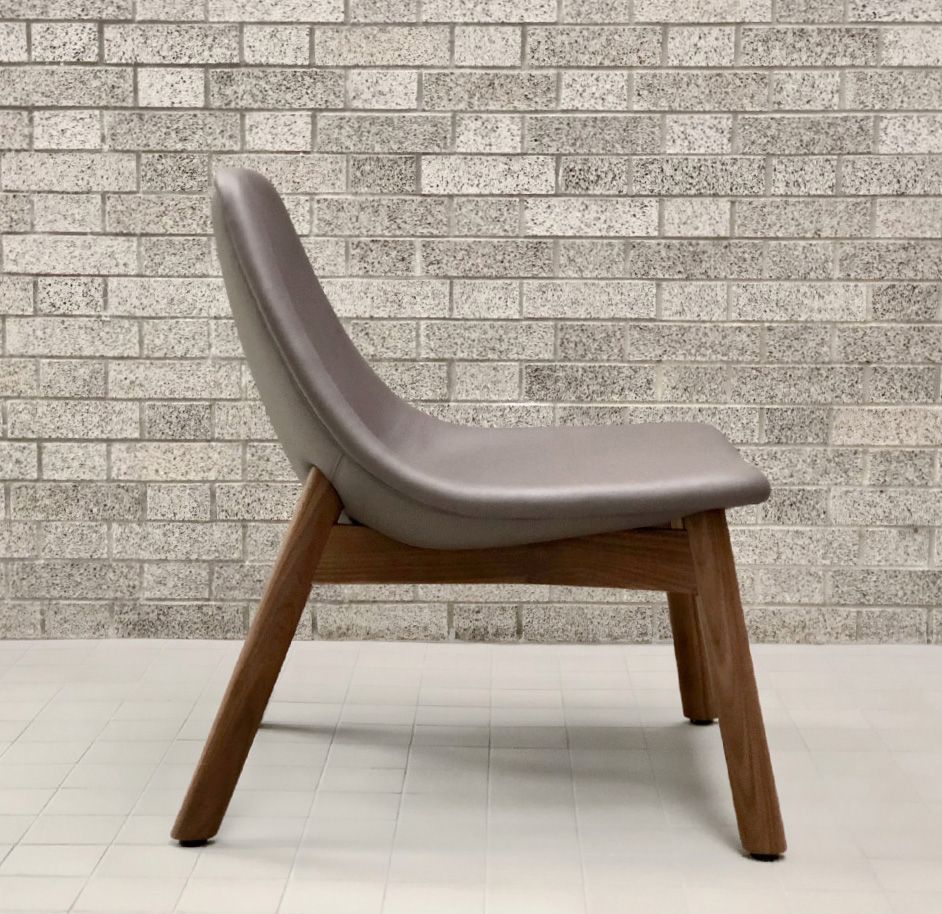 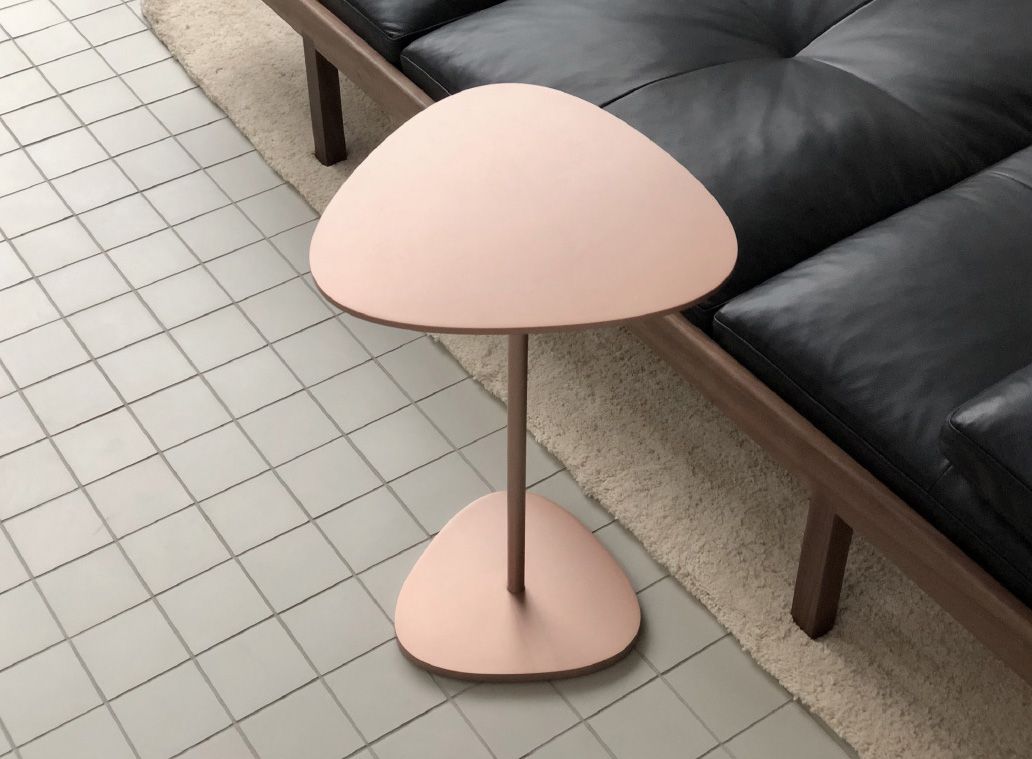 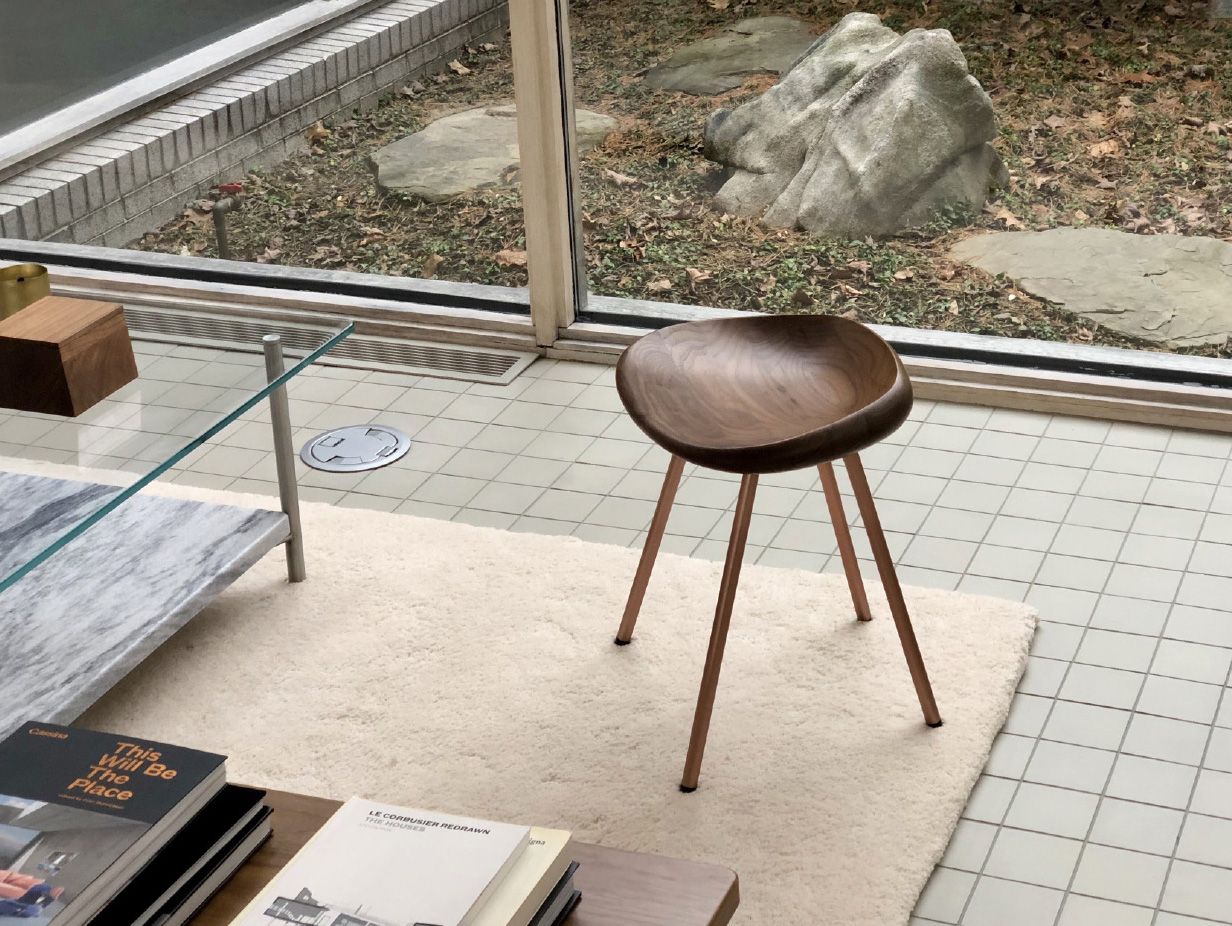