After some years of neglect, this magnificent building has been reborn as the new Palm Springs Art Museum Architecture and Design Center, Edwards Harris Pavilion. “It’s a wonderful project given that everybody in town had their eye on this remarkable little Miesian gem,” says Beth Harris, one of a handful of local preservationists responsible for bringing the ambitious project to life.

“This has been a completely collaborative community project,” explains Harris. “Sidney Williams [the Palm Springs Art Museum architecture and design curator and the architect’s daughter-in-law] took a leadership role and formed a small core group around her.” After learning that the site was to be redeveloped by its then-owner, Williams campaigned for Class 1 Historic Site status and worked with a handful of donors, including Harris and Trina Turk and husband Jonathan Skow to purchase the building. “The next steps were restoring the building and raising awareness of what it could be in terms of being a meeting place for architecture and design in Palm Springs,” added Harris.

Beth Harris certainly knows a thing or two about restoring important modern architecture. She became a central figure in Palm Springs’ 1990s renaissance after lovingly restoring Richard Neutra’s iconic Kaufmann House, which she purchased with her husband Brent in 1993. “Owning Kaufmann was more or less a commitment to the community and my interest has always been about community participation in architecture,” Harris says, explaining the house’s role as a catalyst that would inspire the restoration of many other prominent modernist buildings.

The vast majority of those buildings, however, were private homes, hidden behind hedgerows and inaccessible to the average visitor. Today, having sold the Kaufmann House, Harris spends her time advocating for the rescue of downtown’s core buildings, which continue to be demolished or languish in states of disrepair. “It was hard to believe that after all the success and interest in private homes here that some people don’t see the value in saving some of these buildings in the downtown area. These too could tell the story of midcentury modernism, but in a much more public way,” she says.

The new A+D Center, as it’s also known, promises to do just that, opening at a pivotal time for the city as many of its historic downtown buildings are caught in the crosshairs of bullish developers, rising commercial prices and conflicting community interests.

Los Angeles design firm Marmol Radziner, who carried out Kaufmann’s painstaking restoration as well as that of other significant homes in the area, was retained to oversee the building’s renovation. Working from Williams’ original drawings in addition to Julius Shulman’s iconic photographs, the architects gently resuscitated the building. The most significant work involved removing office wall dividers, tearing up carpet to uncover the original terrazzo floors and fresh landscaping.

The result is a 13,000 square foot masterpiece that looks as if it was always destined to be a gallery. “It’s a very interesting curatorial space,” says Harris, who suggests the versatile site will also accommodate music events and experiences like gourmet food trucks. “Being a transparent glass box means there’s going to be a lot of connectivity between the exhibitions, the building itself and the streets. Some people refer to it as the living room. I think of it as this open atrium that if you’re walking by you’re still participating in an exhibition.”

Curatorially, the A+D Center’s program is ambitious, with upcoming exhibitions curated by renowned desert artists such as Andrea Zittel. It’s only fitting that the Center’s inaugural exhibition is devoted to E Stewart Williams, the building’s impassioned architect, whose prolific work was instrumental in defining the desert modern style. “An Eloquent Modernist: E. Stewart Williams, Architect” will be a detailed retrospective of the architect’s creative output, explored through scale models, photography, drawings and film.

As the powerful exhibition demonstrates, Williams was an architect of both precision and sensitivity, who understood the importance of planned development and the creation of spaces that would foster community connection. “The A+D Center is very much a testament to what he created,” Harris says. “This building is a way to show that if you care for these spaces and you repurpose them in a useful way, that they’ll really contribute to the community and the downtown area. I see it as a powerful beacon that will really draw people in.” 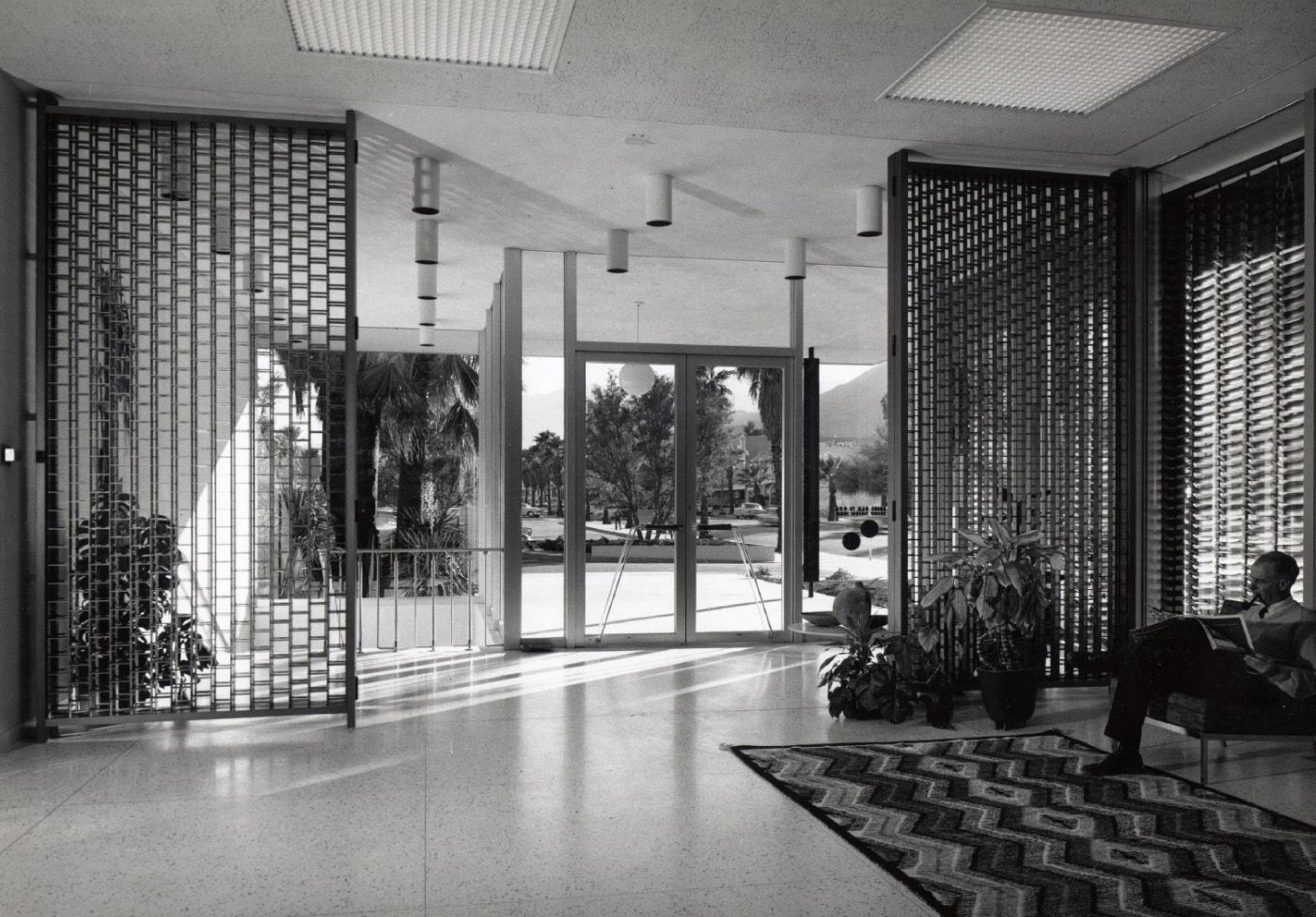 Not like other banks. E. Stewart Williams broke with the conventions of the day, creating a light and elegant space that would foster a sense of community in downtown Palm Springs. 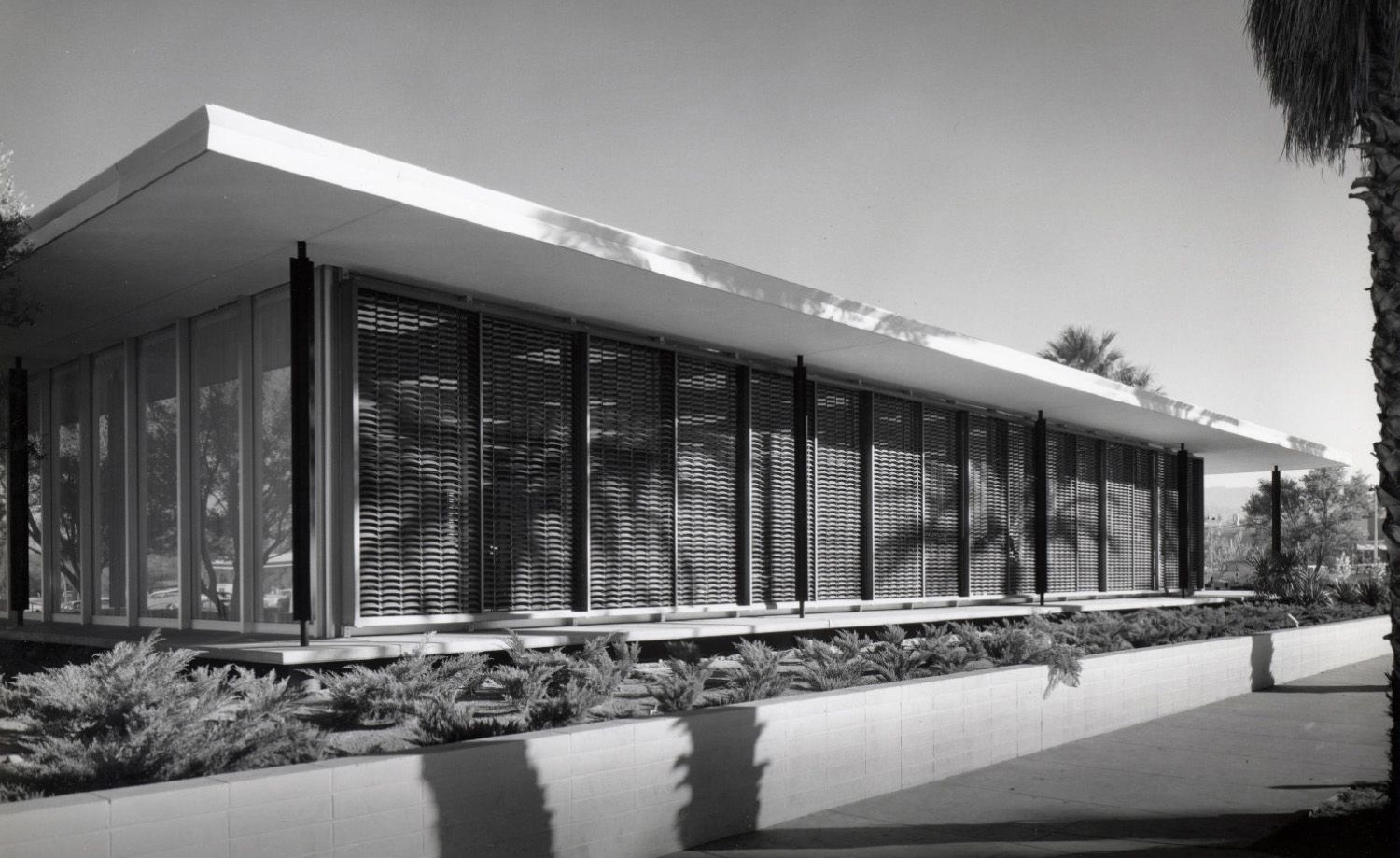 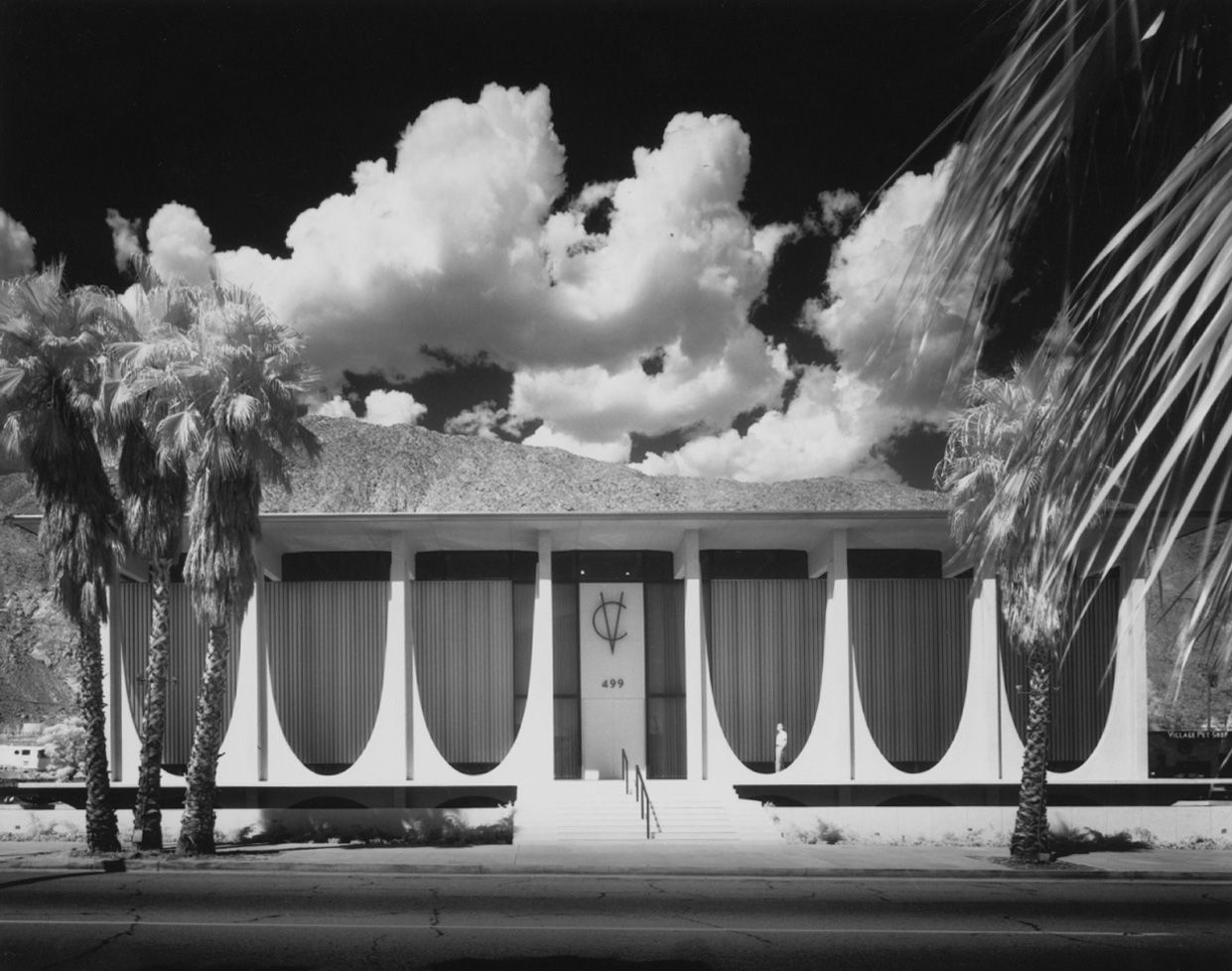 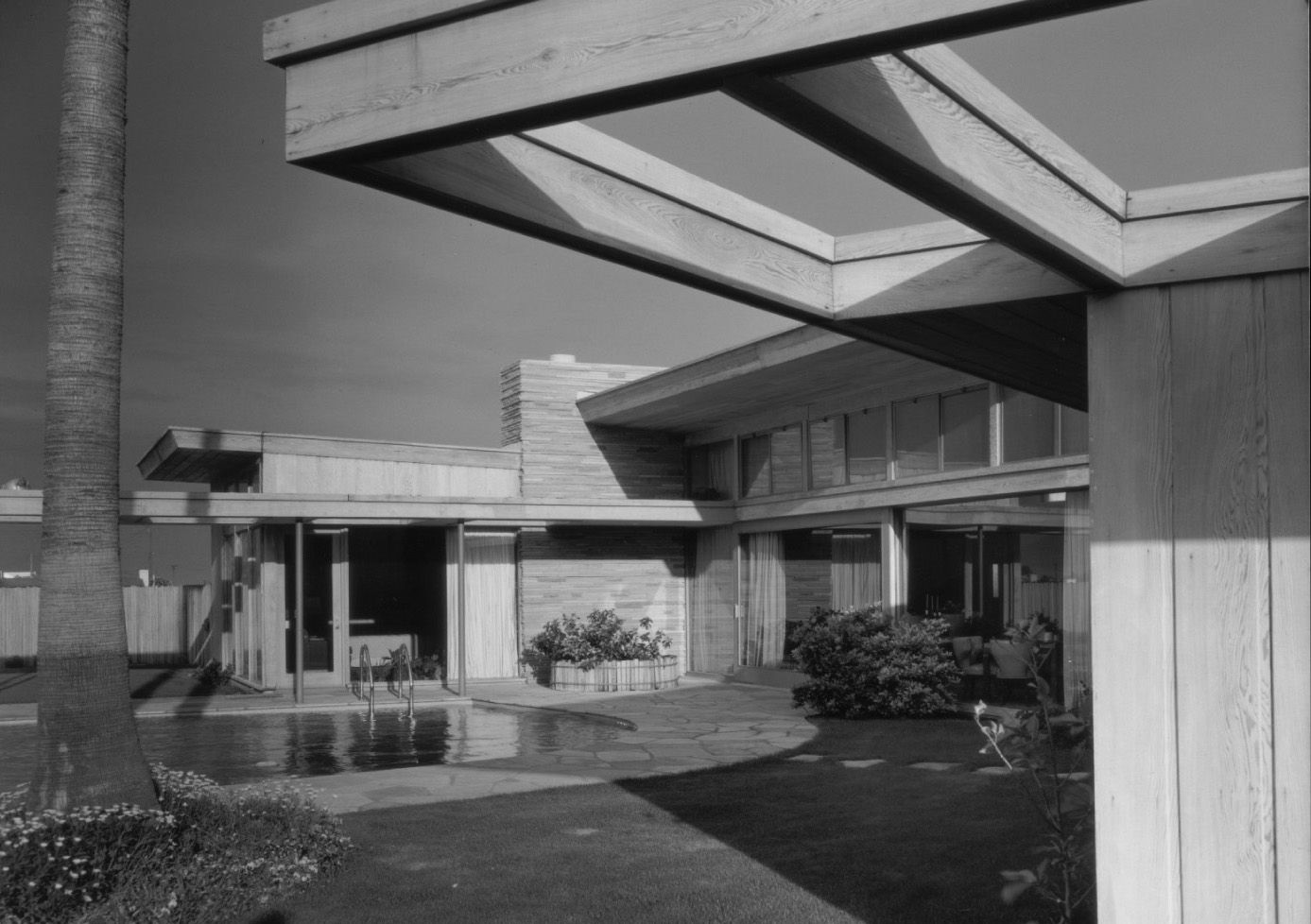 E. Stewart Williams made his mark with the lavish “Twin Palms,” estate built for Frank Sinatra in 1947. 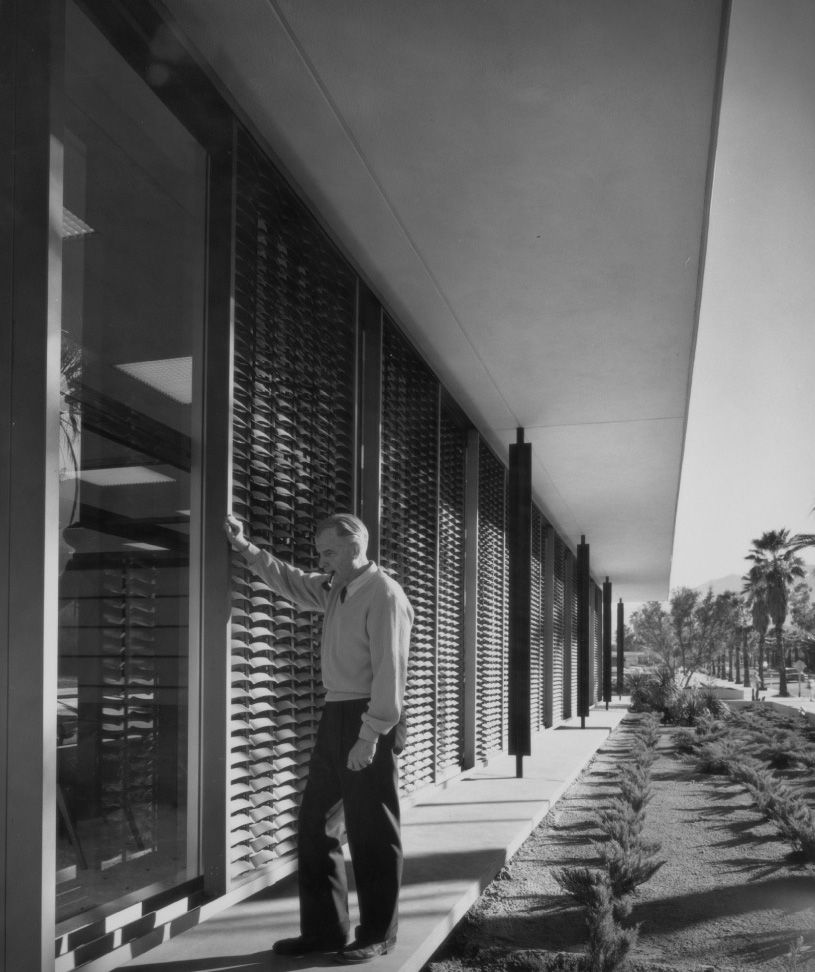 The architect E. Stewart Williams was an impassioned visionary, whose prolific work was instrumental in defining the desert modern style. Captured by Julius Shulman at the Santa Fe Savings and Loan Building. 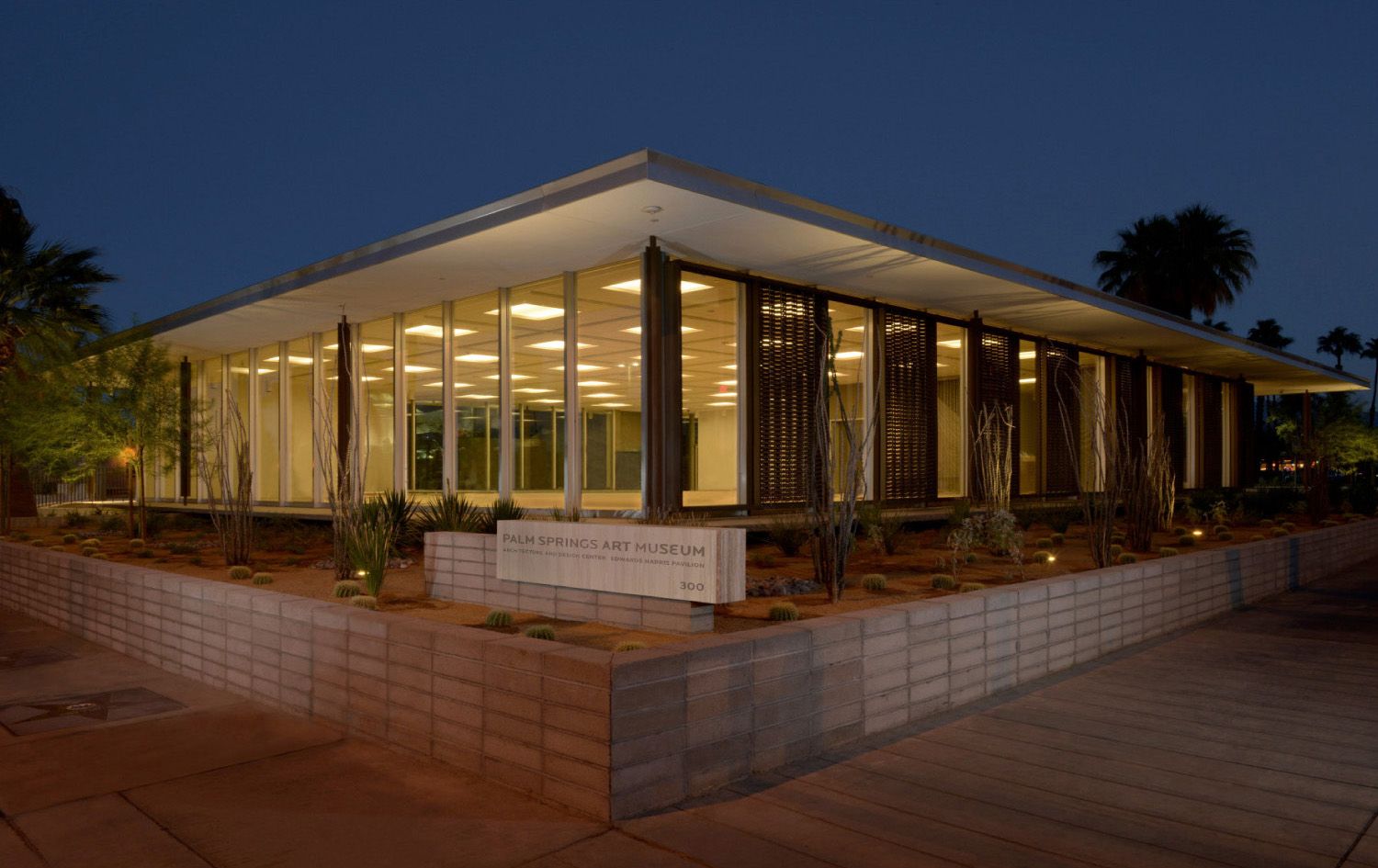 A desert wonder; after languishing for years, the magnificent building has been reborn as the new Palm Springs Art Museum Architecture and Design Center, Edwards Harris Pavilion. 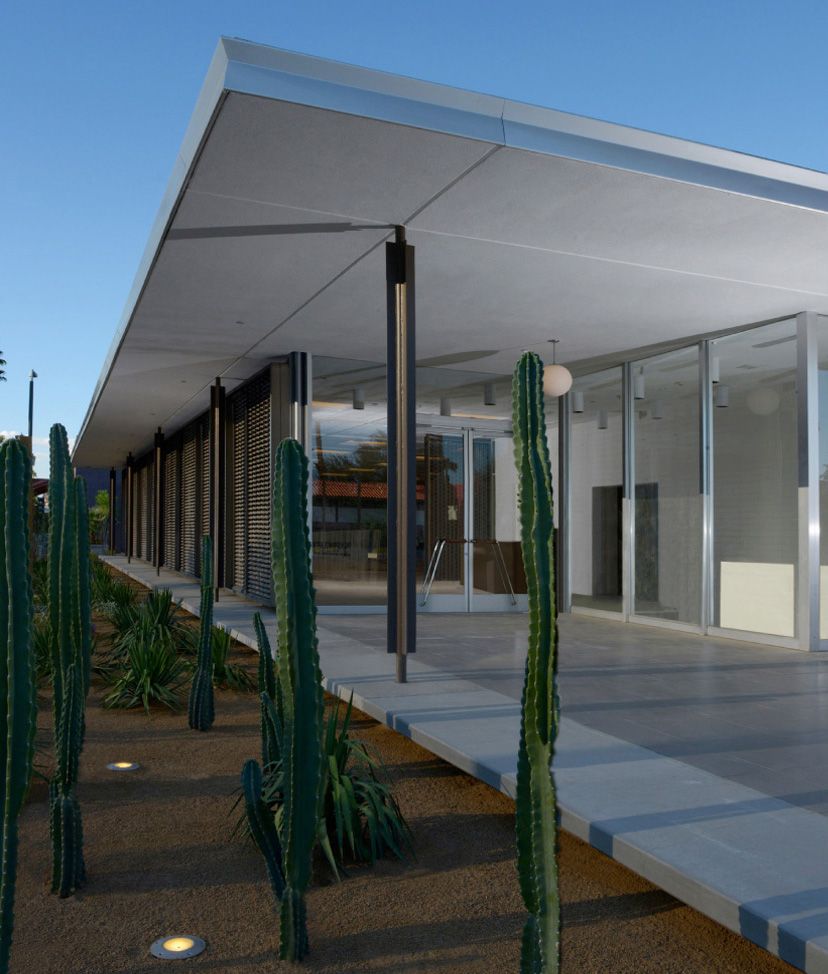 With its elegant proportions, floor-to-celing windows and commanding aspect, the building seems like it was always destined to be a gallery.