When a person hires an architect to design them a house, obviously the end result is a residence that is customized to the specific owner or owners. Richard Neutra was an architect who particularly encouraged customization, often to a degree that some may have thought short-sighted, for it certainly could narrow the field of potential future owners.

I remember being awed by the lengths to which Mr. Neutra went in order for his clients to be utterly comfortable in their home, as every habit and whim had been addressed. The original owner of my home, Mrs. Grace Lewis Miller enjoyed lengthy correspondence with Neutra, her architect. In all they exchanged over 50 letters between August 1936 and February 1937, discussing in great detail her daily routine and habits so that her new home would indeed be her house. That Neutra listened so carefully to his clients’ requirements and suggestions, and treated them with enormous respect is certainly reflected in the end result.

The little house and desert exercise studio designed for Grace Lewis Miller in 1936 represented everything she wanted. The home was to fulfill a specific, dual role. Firstly, it was a winter home for her and secondly it was an exercise studio where she could teach clients Mensendieck Functional Exercises, something she had discovered whilst on a cruise in Sweden and subsequently learned to teach. The house was small - her budget was only $5000 but her requirements were basic.

Mrs. Miller chose Neutra because they shared an inherent belief that a properly designed house provides the occupant with both mental and physical health benefits. For an architect who had never built anything in the desert it was perfectly thought out, with a divisible living space and an exercise studio with its own private entrance. A panel of north facing textured glass windows provided natural light and privacy. The wide overhangs that extended out over all the south- and west-facing windows provided much-needed shade from the sun, and a plethora of windows and doors offered plenty of cross-ventilation.

All in all, it was a perfect utilitarian space and measured just over eleven hundred square feet. Mrs. Miller derived much joy from it. It fit her perfectly.

In later years, however, the home wasn’t considered such a success. When I bought it, in September 2000, it was impossible to fathom exactly who this little structure would appeal to. Indeed, the house was in such terrible shape that no bank would even lend on it as it was technically uninhabitable. For several weeks after I bought it, every weekend when I would come down to do some bonding, locals had always broken in and used the small guest bedroom as a crack den. Can you imagine—a Neutra crack den?

When I decided to buy the house it was for the one quality that all real estate agents warn against—emotional. Yes the house was trashed but a) it was on a huge piece of land (which greatly appealed to me having grown up on a large farm in England); b) it was essentially a small house so how much could it take to restore? and c) most important of all, it had a perfect pedigree. Obviously I had no idea what I was doing, but at least I could realize my dream of owning a Neutra house.

To own a piece of mid-century modern architecture seemed like a luxury that belonged only to the rich and/or famous—certainly not the likes of me. In the early stages I suffered from terrible buyer’s remorse. I began to wonder if I had made a huge, expensive and horrible mistake.

Then the word got out and the phone began to ring. People from the architectural community all said the same thing: I hear you bought the Miller House, what are your plans? You know that’s a really important house, I hope you’re going to do the right thing. Those words began to haunt me… I was absolutely terrified. Why was it such an important house?

Clarity arrived in the form of Stephen Leet, who was working on a book about the house, using Mrs. Miller’s personal archives. She was something of a pack rat and had saved every single scrap of paper, swatch correspondence etc that pertained to the house. Stephen pointed out similarities between Mrs. Miller and I. We were about the same age, me upon buying the house as she had been upon commissioning it. Our last names only differed by 2 letters, she paid for the house with an inheritance, so did I. We were both single women; she had once wanted to study fashion, so had I.

Eventually I felt sufficiently comfortable to ask him the dreaded question: why was the house so important? Important enough for it to be only the 2nd Neutra house, Windshield being the first, to have its own monograph? He calmly explained that this was not only Neutra’s first desert house, it was (excepting the Schindler Popenoe Cabin, long since demolished) the first desert modern house. It represented a time before Neutra was really famous and for such a small property, it was ingeniously designed. And It was the only house that really epitomized and reflected Neutra’s respect of Asian architecture.

Then came the lengthy restoration. As the house went through its transitions, I began to lose my fear and trusted that everything would turn out as it should. I approached every decision with confidence and clarity. I continued to read all I could about the house and its original owner. Friends invited me to stay at their own spectacular residences in the desert whenever I needed to and I began to understand more about the climate and Palm Springs life. I was completely hooked.

Julius Shulman supplied me with a set of photographs he had taken of the house between 1936 and 1942 and these proved to be invaluable. As I poked around the shell of the house and studied the photographs I became utterly intrigued with it. I also began to notice the personal touches. For instance, Mrs. Miller’s fashionable clothing was housed in a very precise, built-in wardrobe—I could see the holes left in the wood from her hat stands, and her shoe collection was separated and ventilated from the exterior to prevent any nasty smells adhering to the clothes.

I finally received my Certificate of Occupancy on the 17th October 2001 and proudly moved in. Lacking further funds, other than putting an epoxy coat on the black concrete floor, I devised an excuse for doing no further work for a year—that I would live in the house for at least 12 months in order to get to know it better and study the differences in light and climate. It served me well.

Even though the house is no longer surrounded by untouched desert land, the peace and solitude originally intended, prevails. A friend once came to spend a week at Christmas and arrived harried and stressed from a frantic workload. On the 3rd day of his stay he awoke and announced that living in this house was akin to being on valium. Someone else asked if I had purposely not bought any gadgets—television, microwave etc - and I realized that it was not a conscious decision at all. Living simply just evolved as if there were no other way.

To me there isn’t another way. The house is now the nearest it’s been in years to the way it was originally designed. In 1937 it fit Grace Miller perfectly, and now it fits me. I was reminded recently that before I was born, my parents differed in their choice of names if their imminent offspring were a girl. My Welsh father favored Charlotte or Catherine. My Irish mother favored Grania—Gaelic for Grace. Even though my father’s choice prevailed, this is indeed the house of Grace. 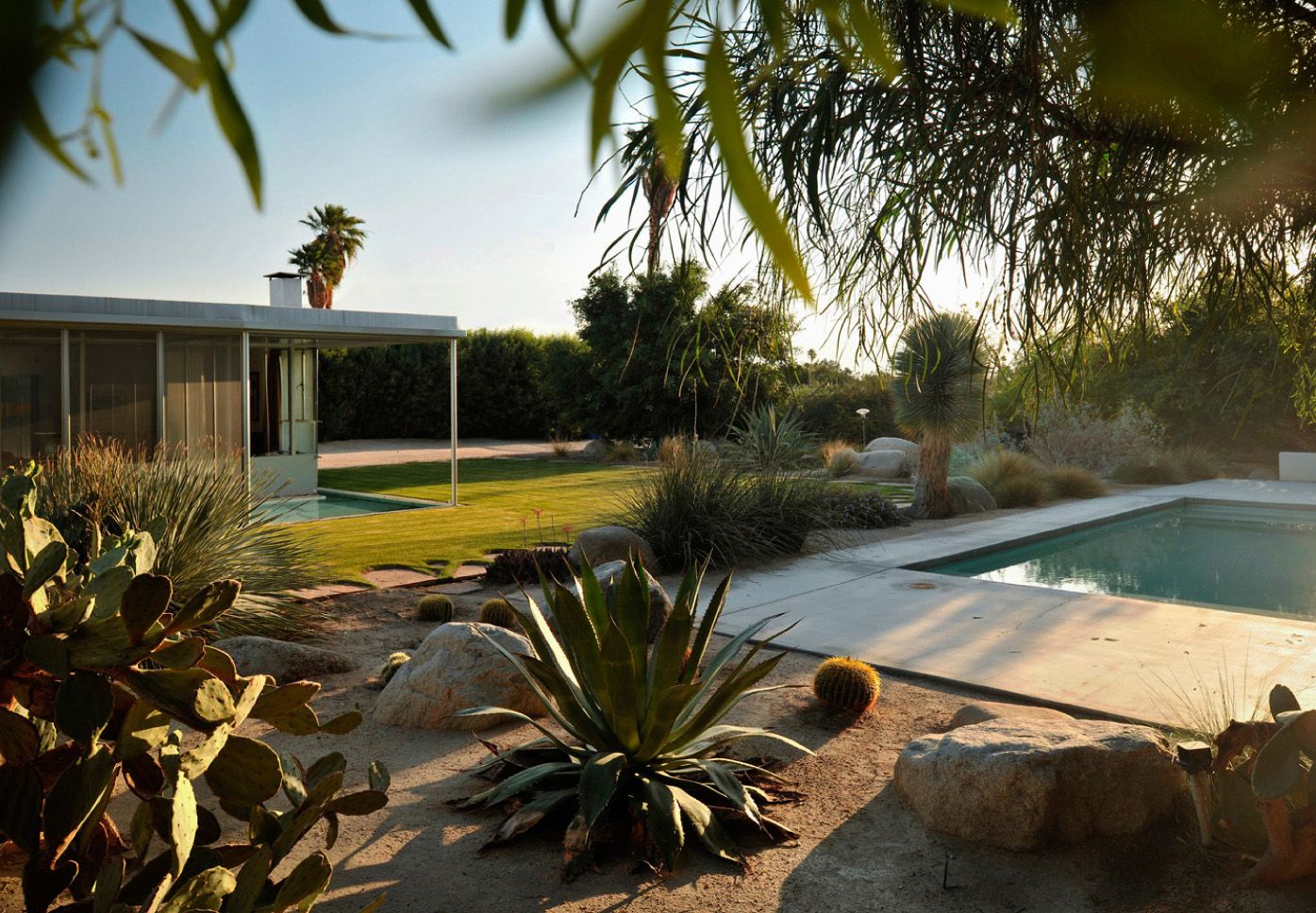 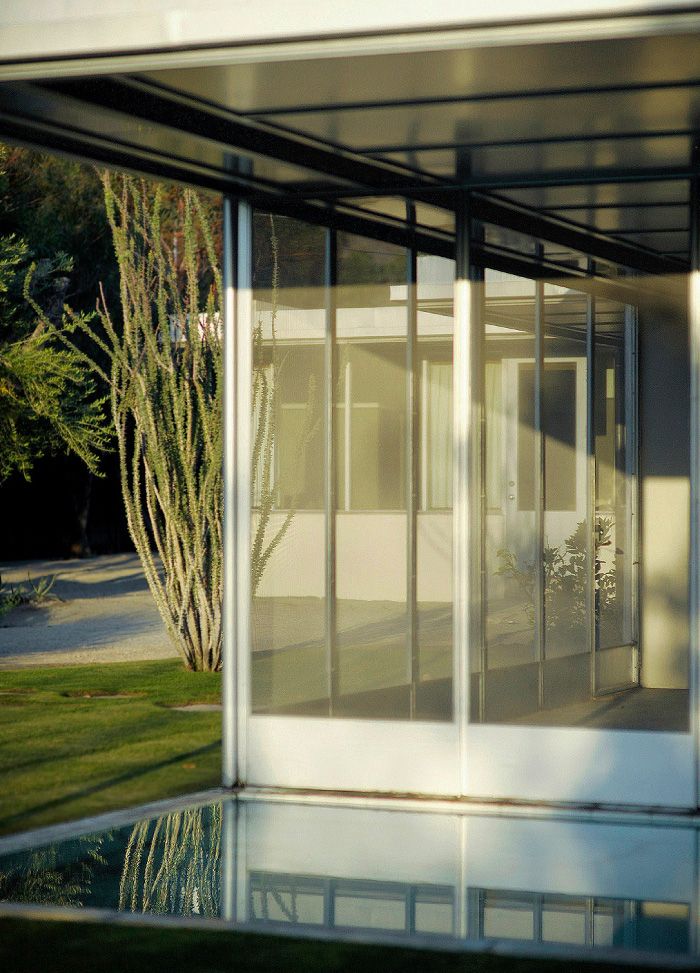 The home's wide overhangs provided much-needed shade from the sun, and a plethora of windows and doors offer plenty of cross-ventilation. 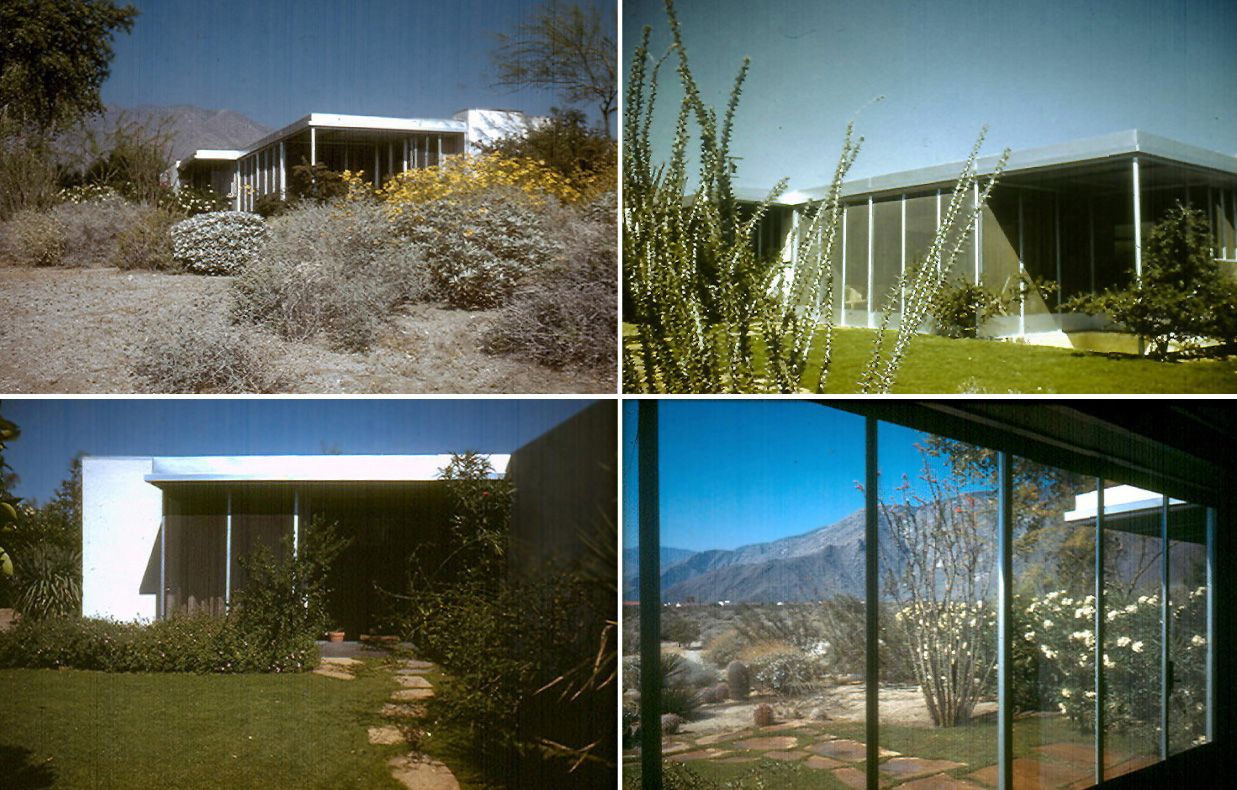 Cool in Kodachrome; Grace Miller's house was small - her budget was only $5000 - but it was eminently photogenic. 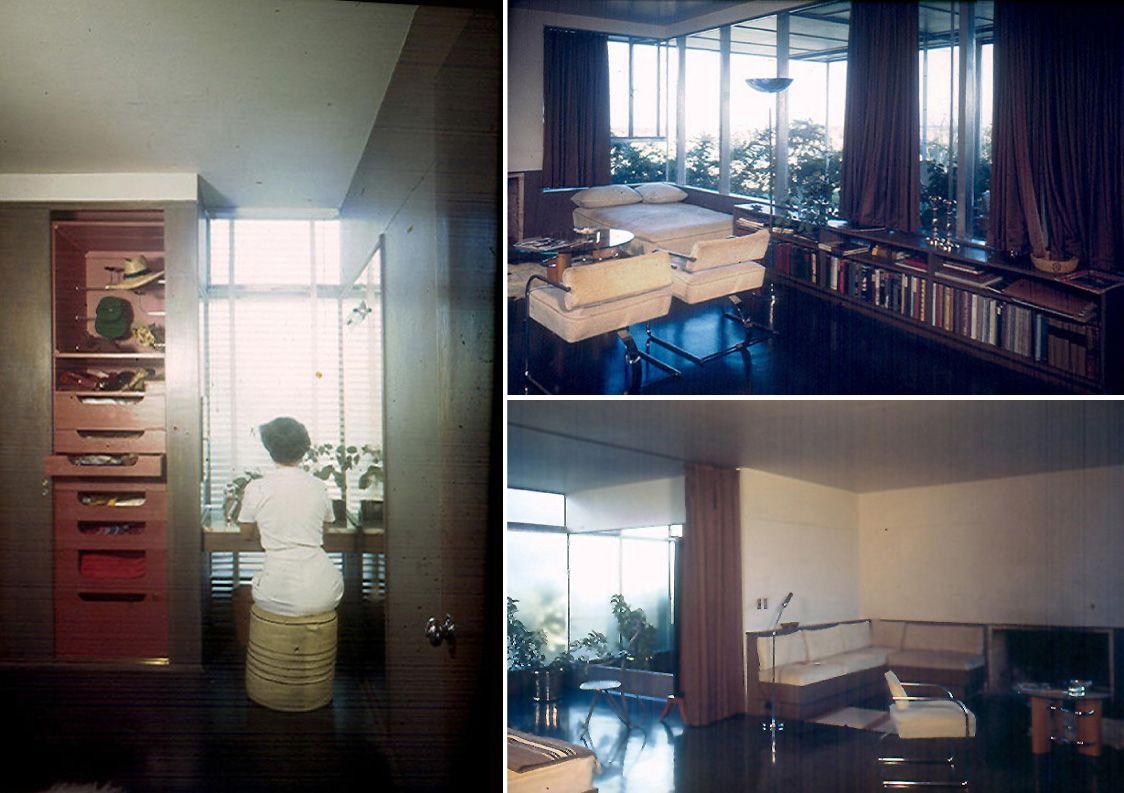 The home was perfectly tailored to meet Grace Miller's needs, including custom wardrobes and an ingenious working space. 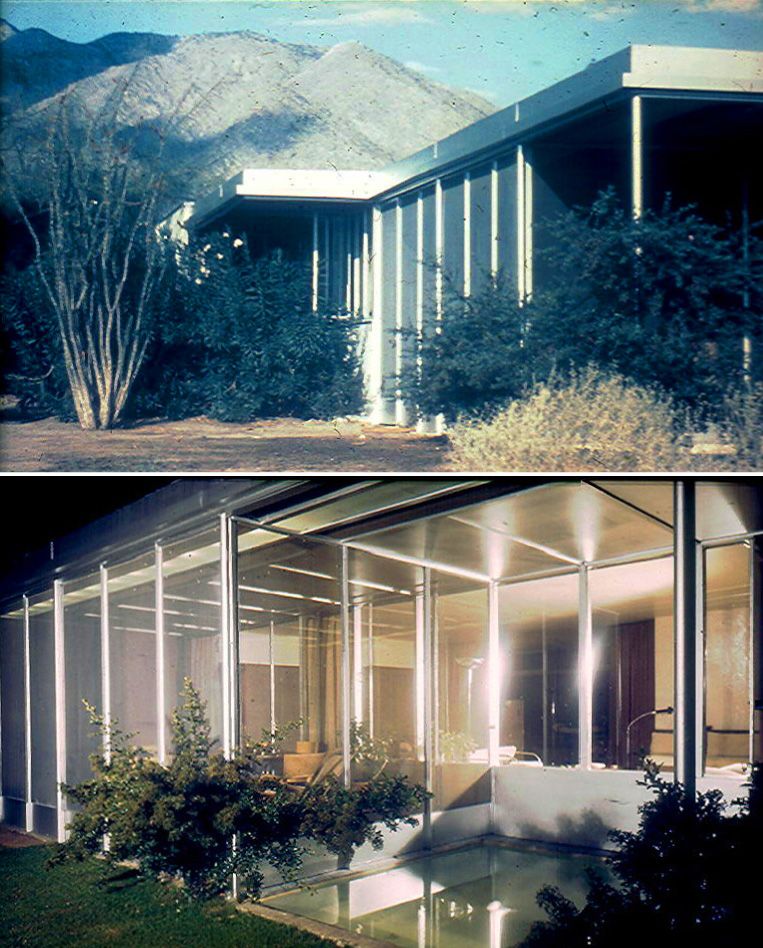 The home was architect Richard Neutra's first design in the desert.

The Grace Miller House, an evergreen modernist residence designed by