In a 1985 National Geographic video interview, George Nakashima proclaims that he’s the “world’s original hippie.” But he’s also identified as a Japanese Druid. And some claim his work is heavily influenced by Shaker austerity. These spiritual philosophies could be seen as contradictory, but their common thread is the act of resignation – a sense of humility that carries through Nakashima’s craft and his treatment of, and communion with materials, especially wood. Nakashima adopted this position of selflessness as a student of the Hindu teacher Sri Aurobindo while working as the project manager for the design and construction of his Golconde Ashram in Pondicherry, India.

Nakashima moved to Pondicherry in 1937 for two years to oversee the design and construction of architect Antonin Raymond’s initial design for Golconde. It was the first reinforced concrete building to be built on the subcontinent, but it also represents a major turning point in Nakashima’s spiritual and creative evolution. The architect evolved and altered the original design patiently as he became a disciple of Aurobindo and practiced his “Internal Yoga,” which called for the continual recognition, through the psychological discipline of Yoga, of a collective consciousness free from the selfishness of the individual. For Nakashima, the creative act functioned as one of translation of this divine consciousness into a manifestation of beauty.

This selflessness carried through the construction program of Golconde where Nakashima’s construction team generated almost no waste whatsoever by creatively recycling packing materials and other industrial and natural materials in the finished dormitory design.

Raymond’s overall horizontal design for this massive dormitory owes much to Le Corbusier’s 1930 Pavillon Suisse at the Cité Internationale Universitaire in Paris, an homage not at all lost on Nakashima. While studying in Paris, Nakashima would stare at and admire the construction of Pavillion Suisse from his apartment window, according to his daughter Mira. On site in Pondicherry, Nakashima altered Raymond’s design to acclimate to the region’s hot climate. He added barrel-vaulted ceilings that collect the structure’s rising heat, a characteristic that he would eventually evolve into the form of the parabolic conoid roofs of two of his studio buildings in New Hope, Pennsylvania.

Despite the brutish nature of concrete material, Nakashima achieves a graceful permeability with Golconde’s outer skin thanks to a system of adjustable louver shutters that allow residents to modulate airflow from the outside in. Interior rooms are delimited by perforated sliding teak doors, which add another layer of ventilation-privileging privacy. And by raising the building on a series of pilotis, Nakashima allowed for a ventilating breezeway while also giving a nod to Pavillion Suisse’s similar characteristic foundation. Today, this area acts as a lively collection point for tea and discussion.

The endurance of the building’s original features and functions is a testament to Nakashima’s choice of materials like black granite floors, the texture and color of which compliment the building’s concrete and teak wall surfaces. His insistence on custom manufacturing all non-recycled construction materials on site, even nails, speaks to the meditative state of his time at Golconde, a strain of Modernism that deviates from his predecessor, Le Corbusier, and is certainly one all his own. 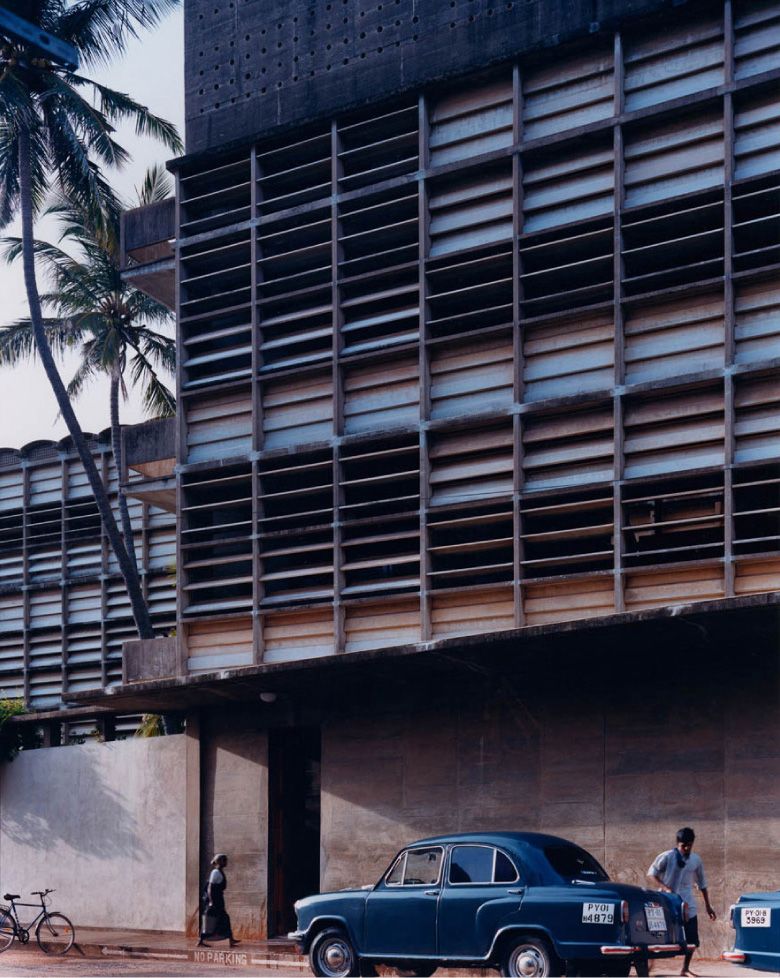 Nakashima achieved a graceful permeability with Golconde’s outer skin thanks to a system of adjustable louver shutters that allow residents to modulate airflow from the outside in. 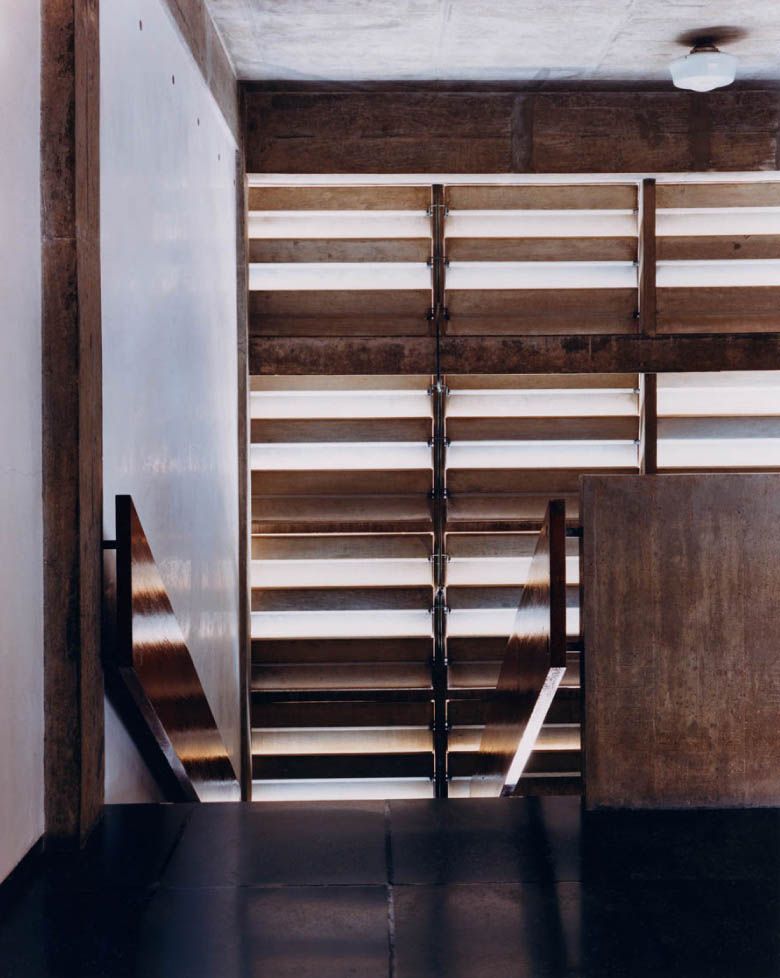 Built to last; Nakashima’s chose timeless, long-lasting materials like black granite floors, the texture and color of which complement the building’s concrete and teak wall surfaces. 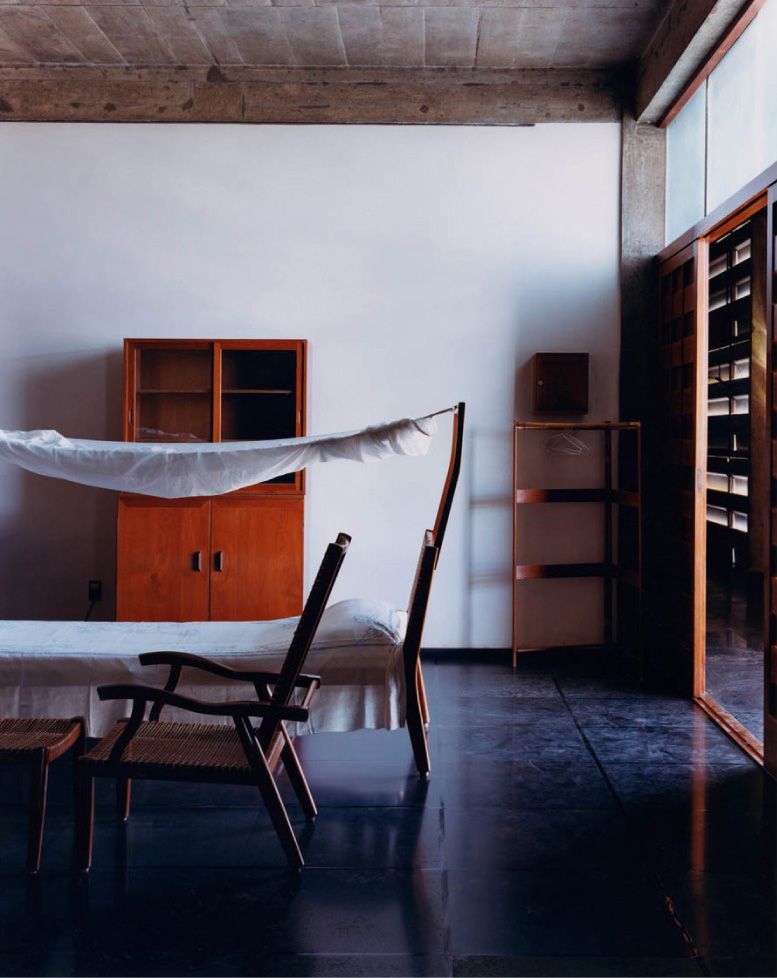 The Ashram's interiors emphasize open spaces and the humanistic character of natural materials. It was a building before its time. 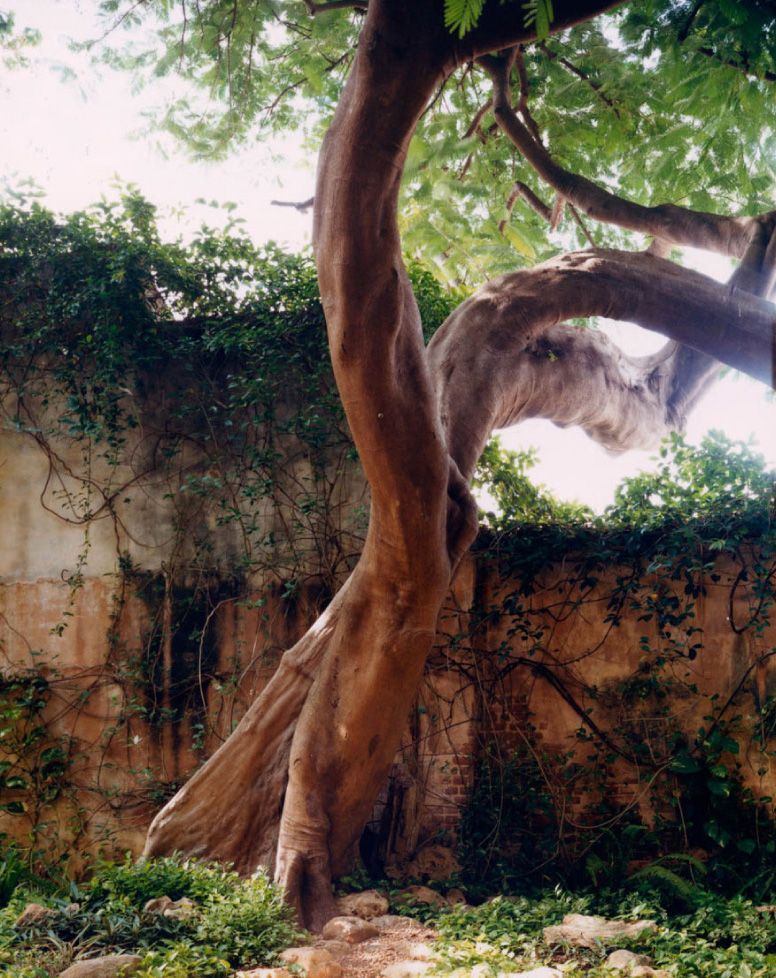 For Nakashima, the creative act functioned as one of translation of this divine consciousness into a manifestation of beauty. 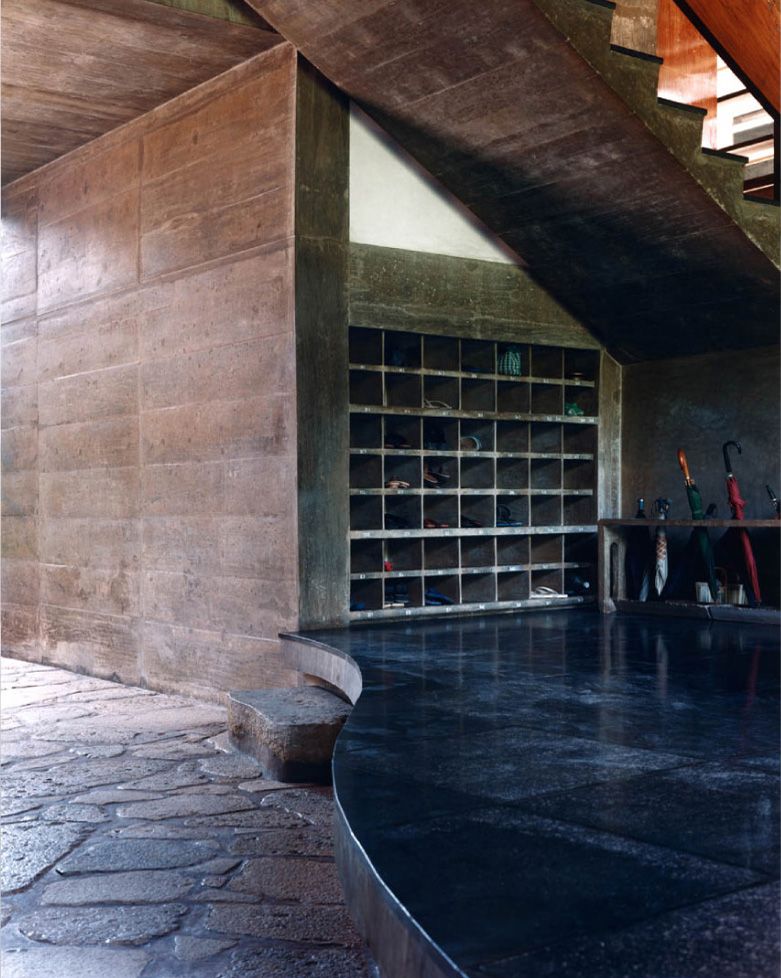 Immaculately maintained, the building takes advantage of a spare material palette that was perfect for Pondicherry's tropical climate. 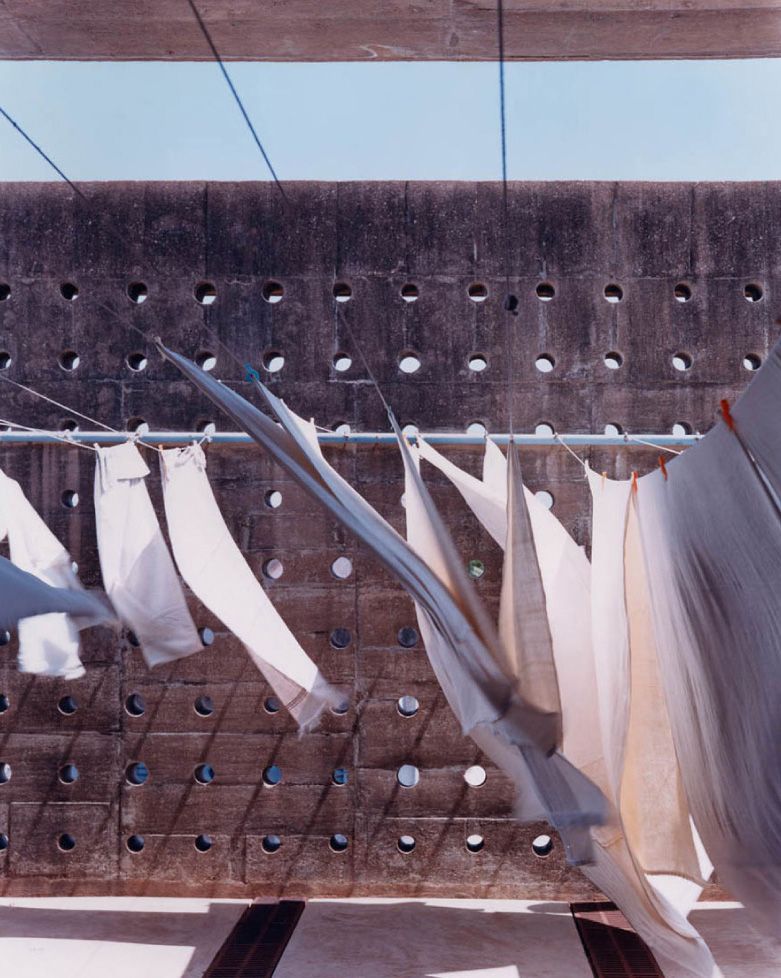 Simplicity in the sublime; Golconde elevates the utilitarian (circular cutouts) to the religious. 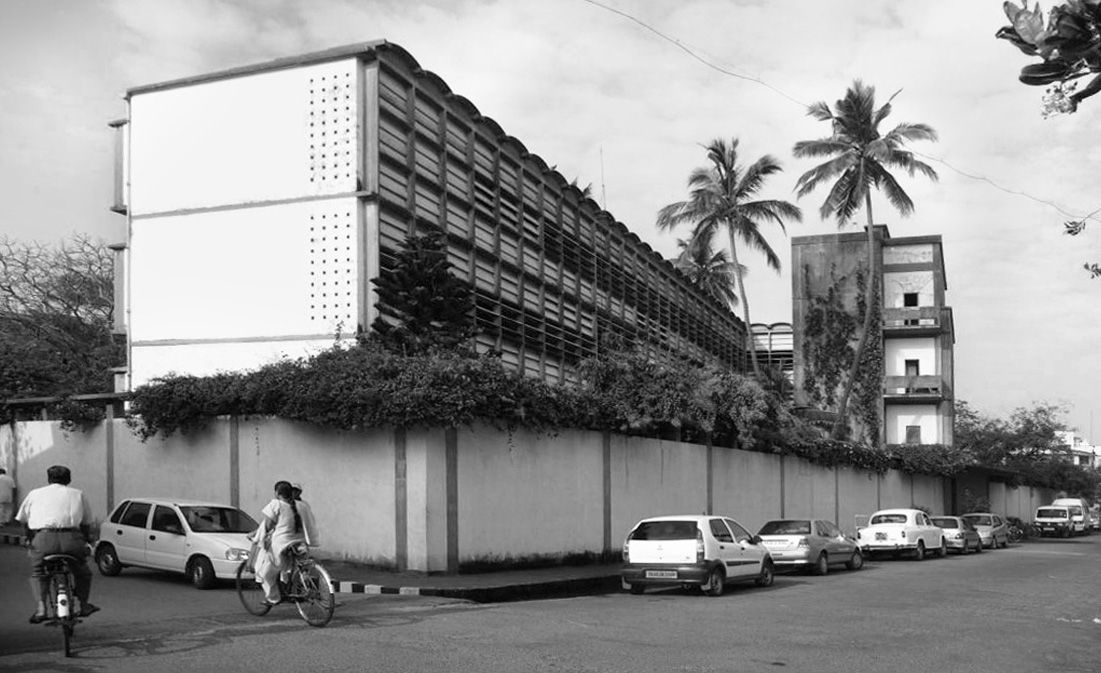 Finished in 1945, Golconde was the first modernist building on the sub-continent. Working with architect Antonin Raymond, Nakashima reconciled the ideals of early modernism with the site's tropical context.

Operable louvers and sliding teak doors allowed for the flow of breeze and privacy for the Ashram's residents.

All color images by Martyn Thompson from his book "Working Space - an Insight into the Creative Heart."