Harry Seidler, the Austrian-born Australian architect credited with bringing Bauhaus Modernism to Australia, left an impressive imprimatur on Australia’s urban environment with ambitious public buildings such as Sydney’s Grosvenor Place and the much-beloved Australia Square. Though he became known for formidable urban towers, in many respects, the architect’s own Sydney house, co-designed by his wife Penelope, remains the most masterful.

Finished in 1967, the Harry and Penelope Seidler House is not like the other houses found on Sydney’s tradition-bound Upper North Shore. The property is approached by a small entry bridge, which leads from the street front garage to the uppermost of four half levels. The architects placed the kitchen, dining area and library on top; the living space and main bedroom beneath; and dedicated the third to the children’s rooms and playroom; the lowest floor contained a studio, guest suite and service room.

Penelope Seidler, who has lived in the house since its completion, refers to the site as the typical “architect’s block,” with its steep vertical drop and ruggedly secluded landscape. “It was sort of tucked away with these fabulous trees and we liked that,” she says. “From a design perspective, the home seemed to design itself – it’s essentially two levels, but split with the stairs as the spine. The living part is all on the north side, and the so-called passive site is on the south and east sides.“

Taking shape at a pivotal time in his career, Harry Seidler set out to create something almost impregnable. After designing the 1950 Rose Seidler House for his parents Max and Rose - then described as “the most talked about house in Sydney” - the architect, the consummate modernist, began moving towards sterner, more brutalist forms.

“The Rose Seidler House is beautiful but requires a lot of maintenance. It’s also thermally unstable,” Penelope says. “When it came time to build our house, Harry was very determined that it would be tough and relatively maintenance free. The finishes are natural with a focus on tougher, more maintenance free materials, but it’s still got beautiful stone walls. And the aesthetics are very uncompromising.”

“I think of the house as very Medieval; it is tough. It’s a tough house and its stone and concrete and the little bridge that goes in is like a drawbridge. I think it’s like a fortress,” she says, adding that the Killara house hasn’t required any changes or modifications. “The house itself hasn’t changed, I’ve just got older.”

The Seidler’s were just as uncompromising when it came to filling the house, using original furniture and world-class artworks. The process of finding pieces that would hold their own against the house’s formidable walls took years. “Harry had his [Josef] Albers, and that year there was an exhibition in Sydney of larger Albers and we bought one of those. In the early seventies, we got the Helen Frankenthaler, it’s in the perfect place as is the Sam Francis.” Frank Stella's 'York Factory,' painting, purchased in 1977, now commands the wall of the children’s playroom. “Those big pieces are part of the house,” Seidler says.

Given their close relationships with the international art scenes – Penelope remains one of Australia’s most active arts patrons – the Killara house was known for its gatherings; a place where foreign guests were fèted and artists would converge. “I was just in Venice for the Biennale, and I saw [performance artist] Marina Abramović and she was in Australia in 1979 and they visited our house,” she says. “She came rushing up to me and said I’ll never forget visiting your fabulous house. I’m so thrilled you still live there. I was blown away. Sometimes I see people who came in the early days and they seem to remember it very well. And that makes me feel pretty good.“

Experiencing the acclaimed house was also a seminal experience for numerous aspiring architects. For many, including young Sydney resident Craig Bassam, who grew up nearby, it was the first personal experience of pure modernism. “The Seidler House was such a multi layered experience of form, raw materials and details that seemed so natural for the dramatic bush site,” says Bassam. “Preserving the rugged landscape of natural bush with a building that confidently sat with equal ruggedness was perfect.”

For Bassam, the time he spent in the house as a friend of the family solidified his career trajectory and passion for modernist design. “The materials palette continued to the interior creating the feeling of an open shell and as a 16 year old I had never experienced such a residential structure, which remains my favorite house,” he says, still recalling indelible images of the home’s modern art and a sparkling Citroën CX parked in the concrete garage.

Having lived in the house for almost half a century, raising her children Polly and Tim there, Penelope Seidler believes the modernist principles of the home’s design continue to resonate. “I think the principles of modernism are more important than ever,” she says. “There’s a big interest in traditional modernism, but the integrity of the goals of the modern movement are being revalued and reassessed. Modernism is more of a philosophy than a style, it’s an attitude to things as opposed to a stylistic thing; it’s a way of going about things.”

It was a building before its time that now seems timelier than ever. “I think it’s very unusual to have a house which has remained in its original state without any changes,” Penelope adds, suggesting it remains her favorite building. ”If you asked me now what I would change, I couldn’t think of a thing.“ 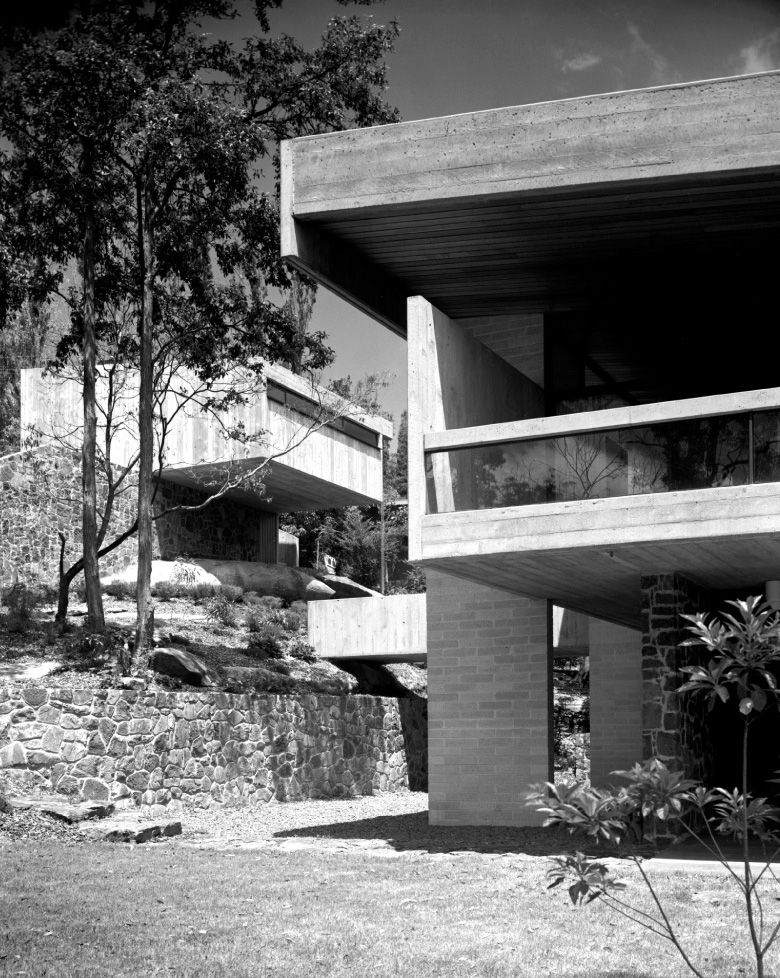 A Medieval redoubt in suburban Australia; the house, with its bridge and use of concrete and stone, evokes an 'elegant' fortress. 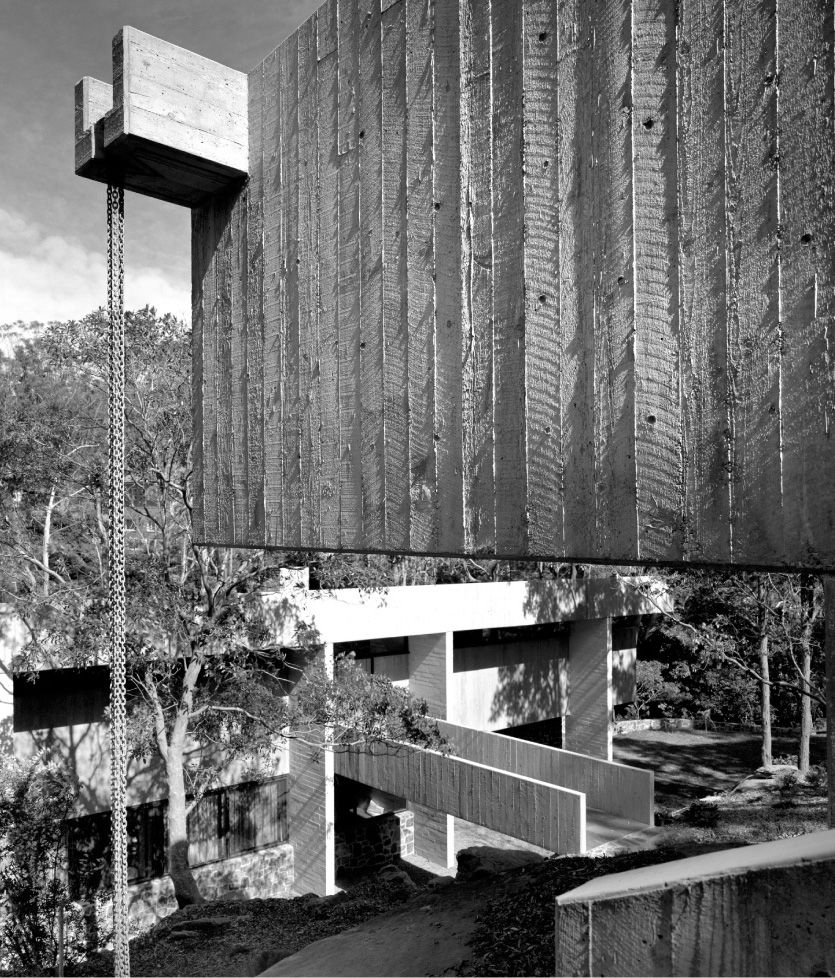 The Harry & Penelope Seidler House is approached by a small entry bridge, which leads from the street front garage to the uppermost of four half levels. 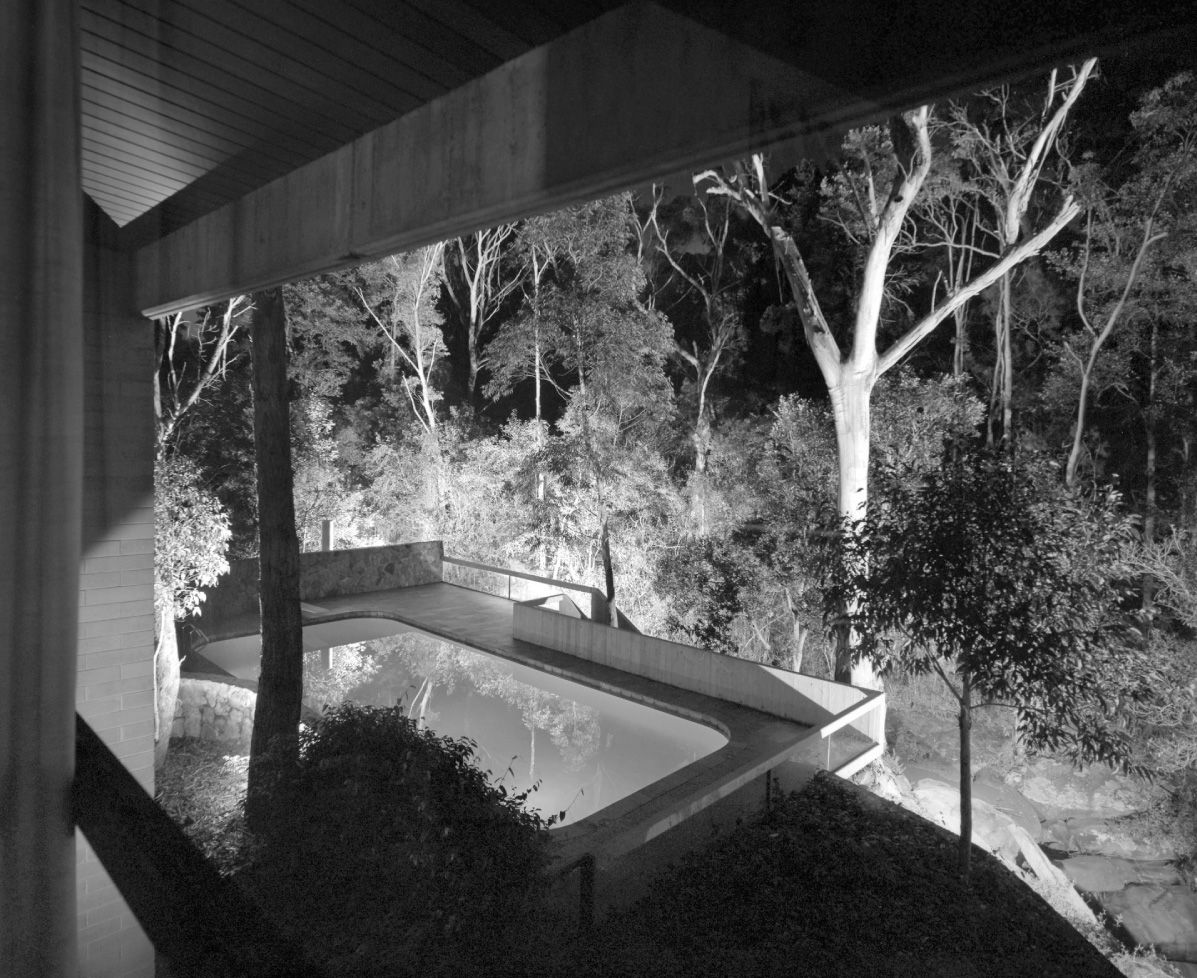 Since being finished in 1967 the house has remained completely unchanged, save for the addition of a swimming pool, which sits seamlessly within the site. 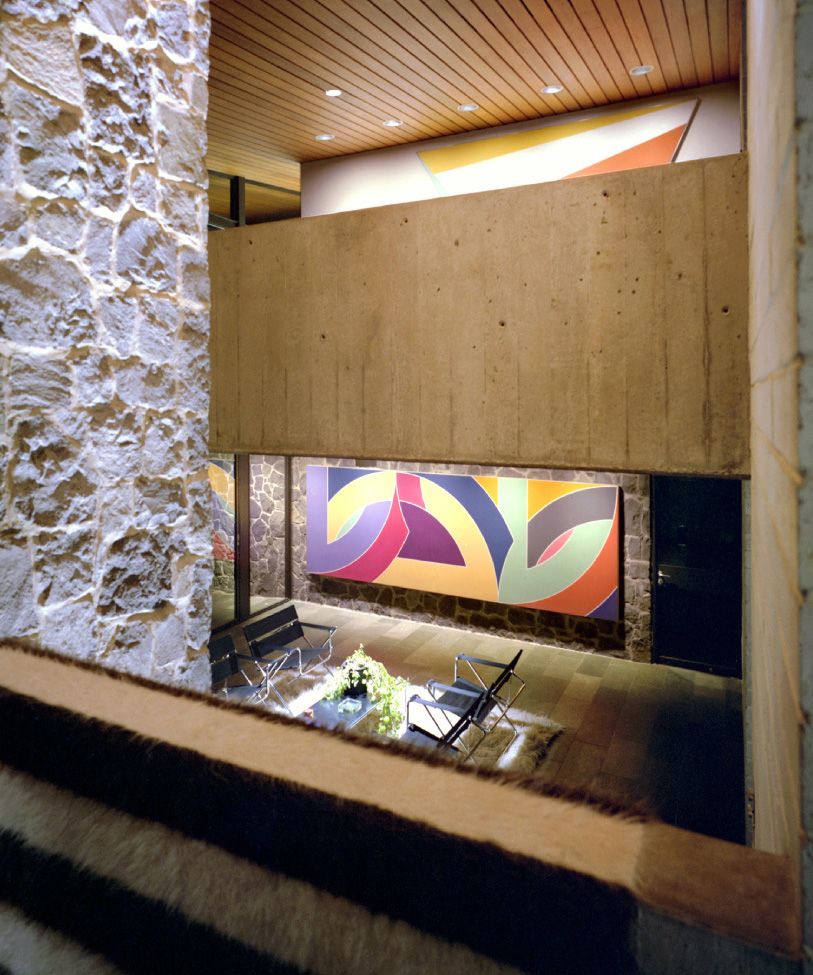 The Seidler’s were just as uncompromising when it came to furnishing the house, using original furniture and world-class artworks, such as a Frank Stella painted in 1970 and purchased in 1977. 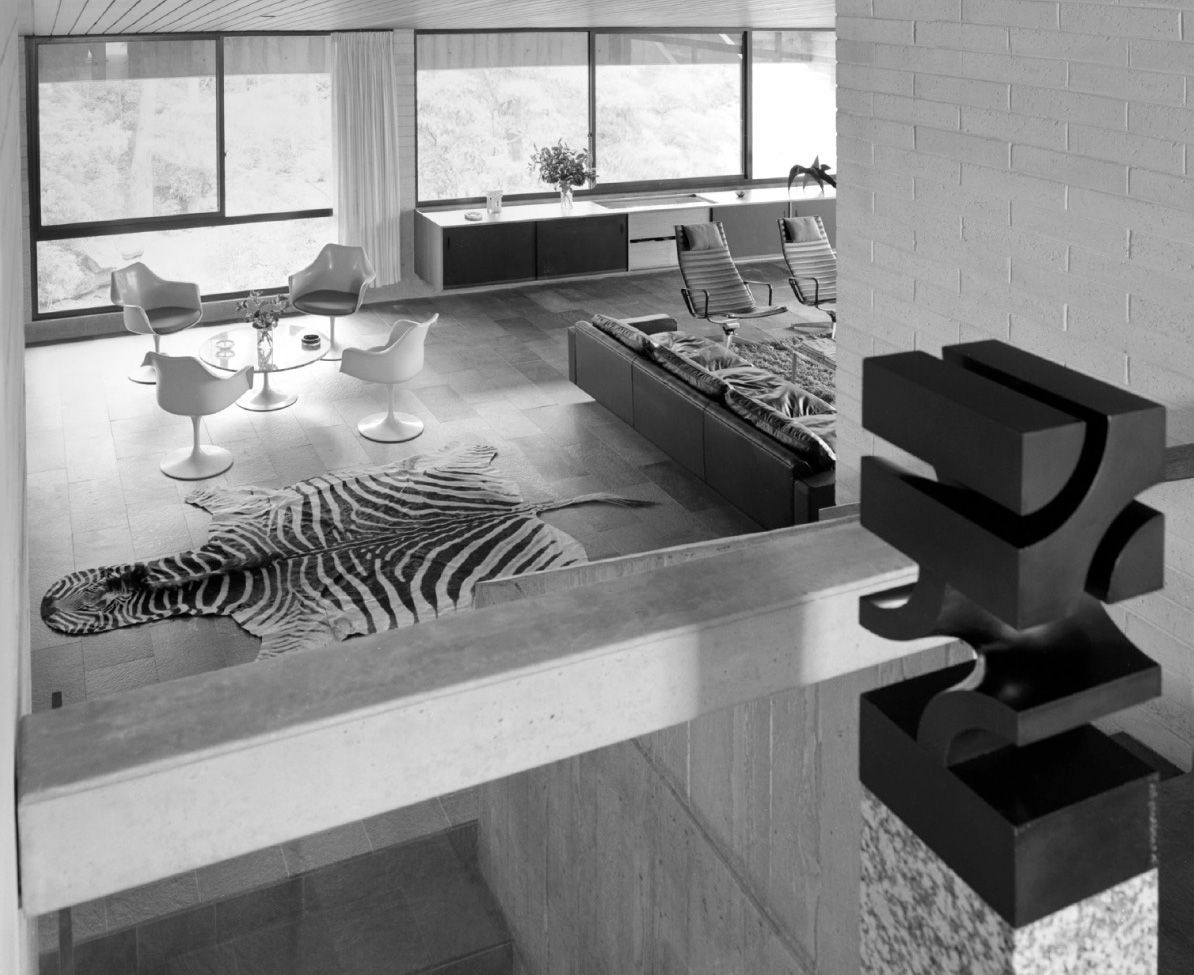 The living space and main bedroom viewed from the uppermost floor.The sculpture is by Norman Carlberg, who, like Seidler, studied under Josef Albers. 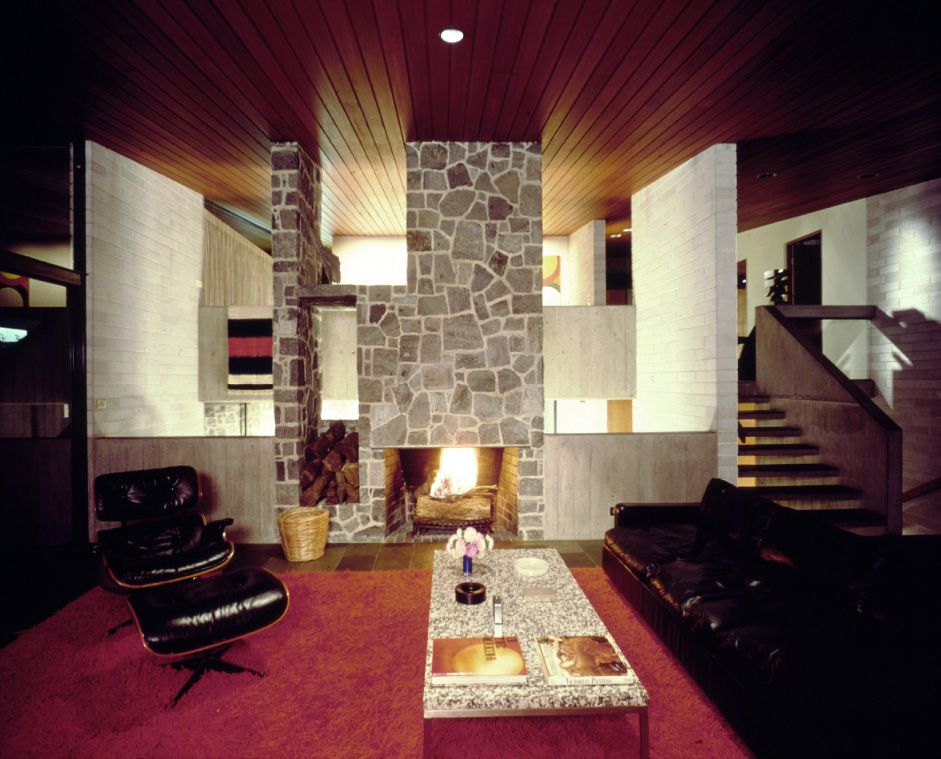 Despite its uncompromising aesthetic principles, the Harry & Penelope Seidler House was very much a family home. 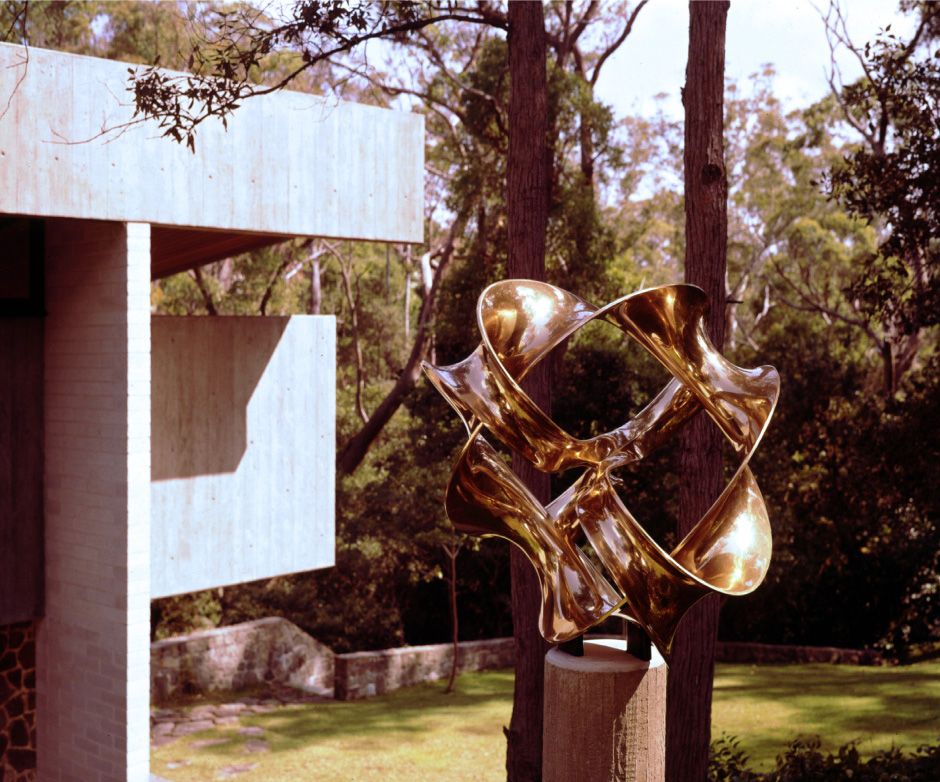 Not like other houses; the modernist home, with its world-class art, including a bronze sculpture by Charles O. Perry, commanded its naturally rugged semi-secluded position. 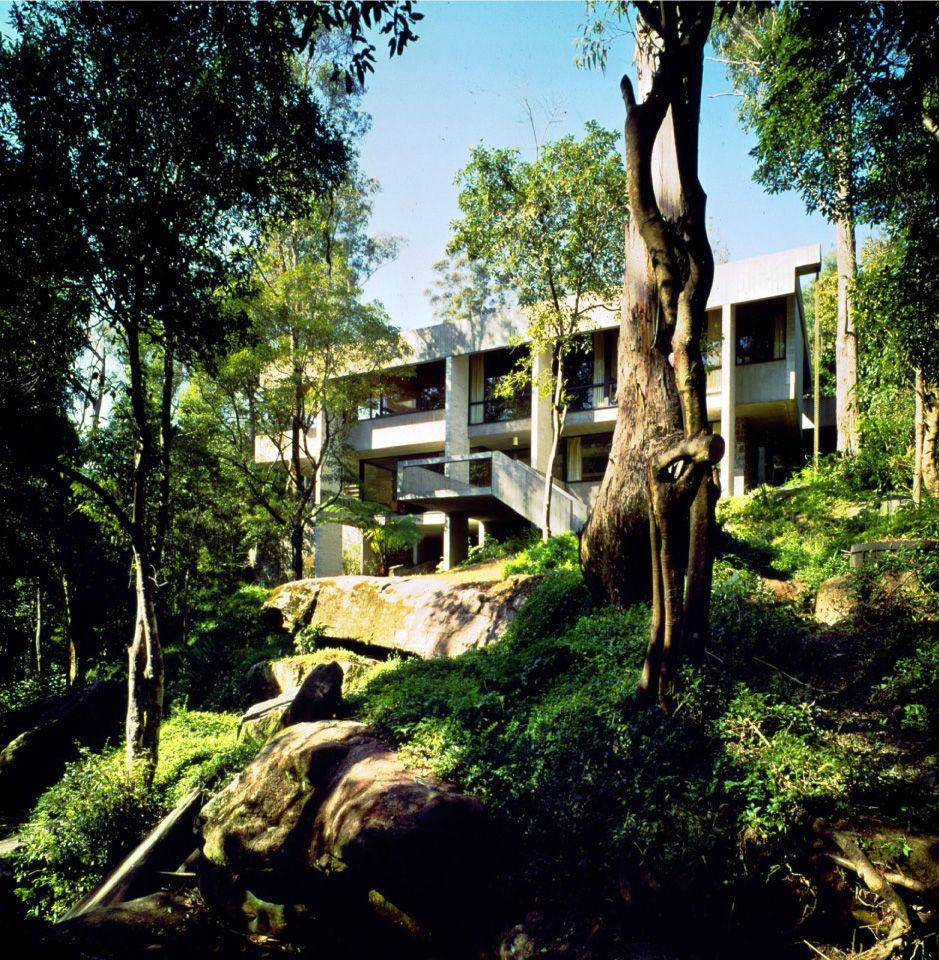 Penelope Seidler, who has lived in the house since its completion, refers to the site as the typical “architect’s block,” with its steep vertical drop and secluded landscape. 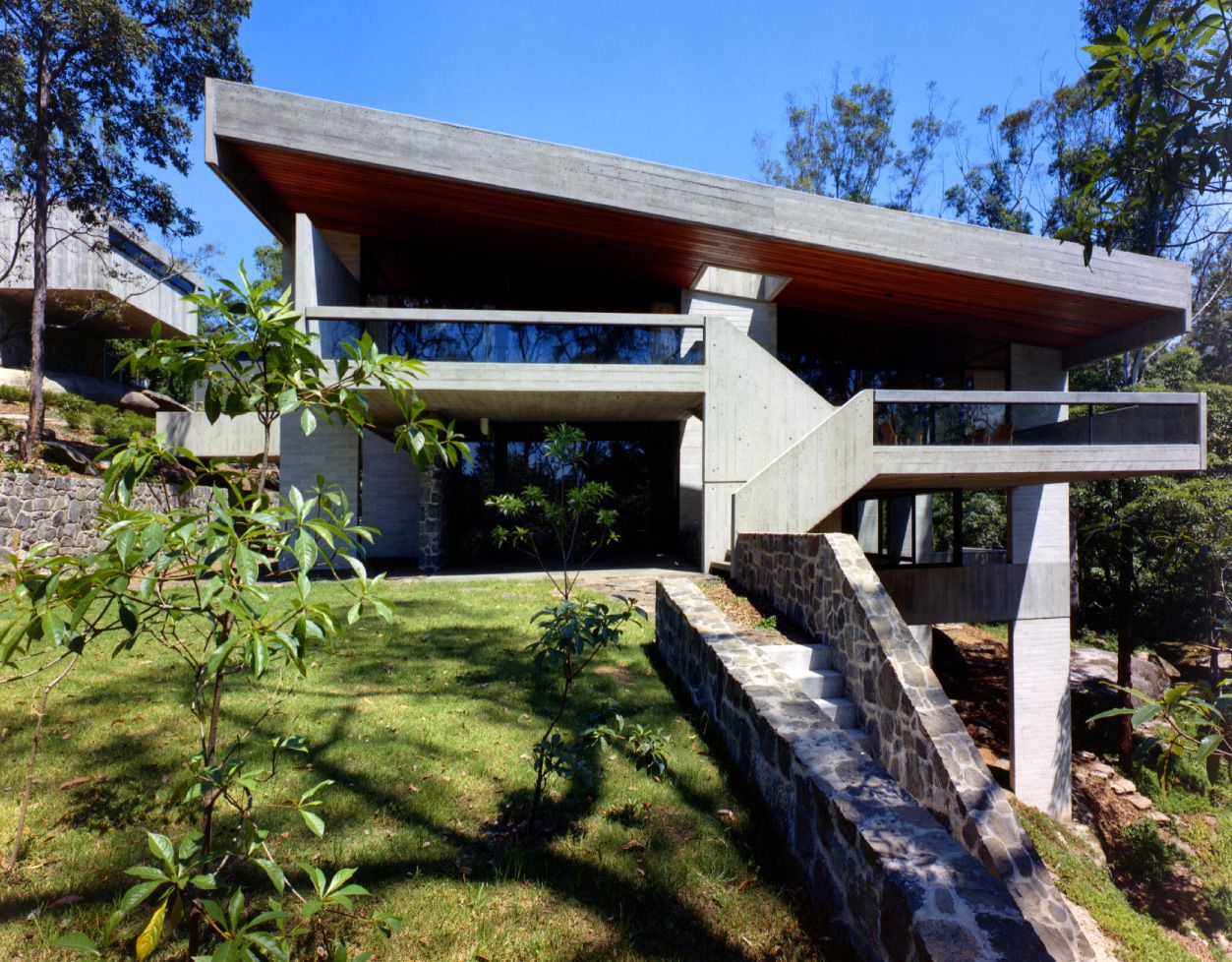 Taking shape at a pivotal time in his career, Harry Seidler set out to create something almost impregnable. Yet the home remains eminently livable and remains Penelope Seidler's favorite building.

Harry & Penelope Seidler pictured on the lawn of their extraordinary Killara home, built in 1967.

All photographs by Max Dupain courtesy of Penelope Seidler.