In far-flung Des Moines and Holland similar experiments with tubular steel furniture were taking place in the 1920s. Dutch architect Mart Stam designed a chair made from gas pipe and standard pipe joint fittings in 1927. It featured a U-shaped sill and base cantilevering upward to provide a seat and back, which terminated, like the base, in a U-shape configuration. But five years earlier in the plains of Iowa, “inventor” Harry E. Nolan filed a patent for a cantilever chair also utilizing tubular steel. Nolan’s “lawn chair” featured a similar sinuous silhouette, but unlike Stam’s fulcrum, which relied on support being carried directly by two rigid front legs, Nolan’s tubing doubled back less gracefully from the sill in a full circular coil. Whereas Nolan’s chair ultimately proved to be unworkable, Stam’s chair has stood the test of time, now widely collected by major cultural institutions.

These endeavors represent a certain moment when tubular steel was considered a modern wonder. Its pliability could be optimized in a cantilever form to liberate the chair from its traditional four-post base, challenging designers to develop the most structurally efficient and graceful system of suspension.

Two weeks after Stam debuted his chair, architect Ludwig Mies van der Rohe introduced the even more streamlined MR-20 Weissenhof cantilever chair which relied on a semicircular front leg arrangement referencing the Thonet Model 10 bentwood rocker. The chair was informally named for its place of debut, the Weissendorf Seidlung, a 1927 exhibition in Stuttgart undertaken by the Deutscher Werkbund that invited architects from countries all around Europe to build homes that exemplified their professional and patrimonial ideals. This is also where Stam’s chair was introduced. The sharp bends of Stam’s design required more cuts and welds to reinforce strength. Van der Rohe realized that more sweeping, generous arcs could withstand the weight of a sitter without having to reinforce tubular steel’s armature and contributed to a more poetic form. Metallgewerbe Joseph Müller Berlin produced the Weissenhof chair from 1927 to 1930 before it was subsequently produced by Thonet, Knoll International, and Bamberg Metallwerkstätten. It was so immediately influential that Philip Johnson, architect and curator of architecture at The Museum of Modern Art included the chair as an example of “modern” design in the 1933 exhibition “Objects 1900 and Today.”

The same year as both Stam and van der Rohe released their respective cantilever chairs, architect and designer Eileen Gray designed tubular steel furniture to accompany her famed modernist home in the south of France. Villa E.1027 is a low-slung house that juts out over the sheer topography of Cap Martin. Similarly, her Adjustable Table E.1027 features a cantilevered circular glass tabletop hemmed in with a ring of tubular steel connected, at one point on its radius, to a single adjustable post leg. Gray utilized the material’s modular properties to engineer the table with an adjustable post that allows the top to move vertically up and down, a quality later seen in her 1933 Menton Table, which can transform in seconds from a coffee table height to that of a standing desk.

These architects’ material experiments were contemporary with a trend in the Bauhaus that privileged industrial innovation. Hollow tubular steel proved to be lighter than wood, and more efficiently manufactured en masse with Fordist production models. At the Staatliches Bauhaus, Marcel Breuer studied under Walter Gropius and began experimenting with tubular steel. He tested his “metal,” so to speak, with the 1926 interiors of Hildegard and Erwin Piscator’s Apartment in Berlin. Breuer’s minimalist interior design included tubular steel coffee tables, nesting side tables, lounge, and dining chairs. The forms were cubic in shape and proportion, all seeming to be lightly suspended in air against the apartment’s stark white walls and uncluttered sightlines.

As Breuer experimented more with the material, he expanded the tubular steel’s formal and functional boundaries. Ironically, he exercised these in a re-imagination of the club chair, known for being a stuffy, pompous form radiating privilege and luxury. Breuer’s 1928 B3 Chair (informally called the Wassily Chair because it was lauded by the painter), strips the club chair to its basics, using tubular steel as both superstructure as well as a gestural device to re-draw its parameters, planes, and lines in his own imagination. In this way, Breuer transforms the club chair into a supremely functional machine. No longer a symbol of the bourgeois, Breuer made the chair truly modern. 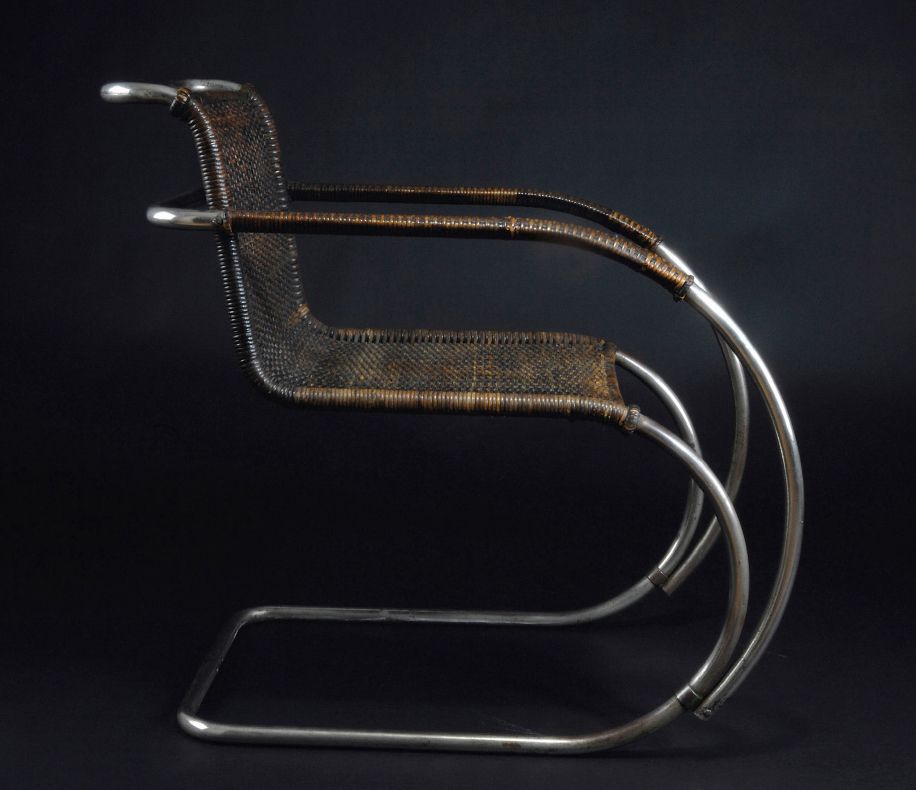 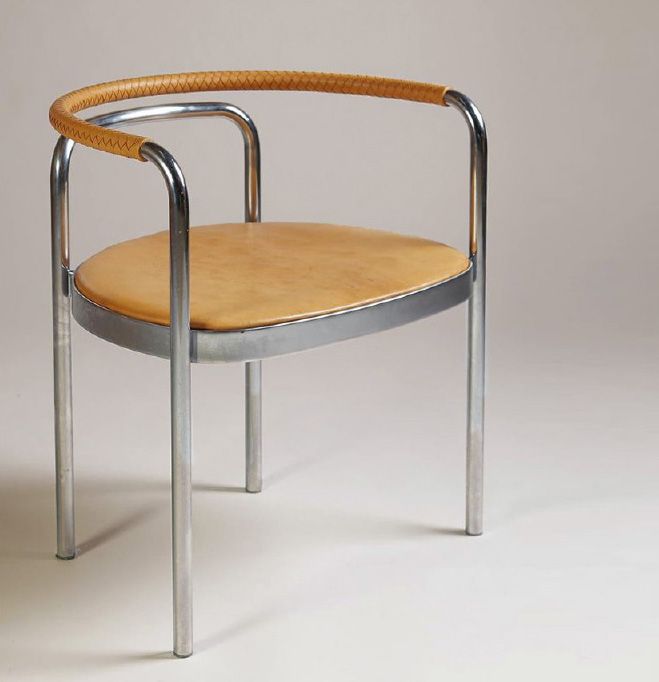 Poul Kjærholm designed the PK-12 arm chair with chrome-plated tubular steel frame in 1964. It was produced by E. Kold Christensen. 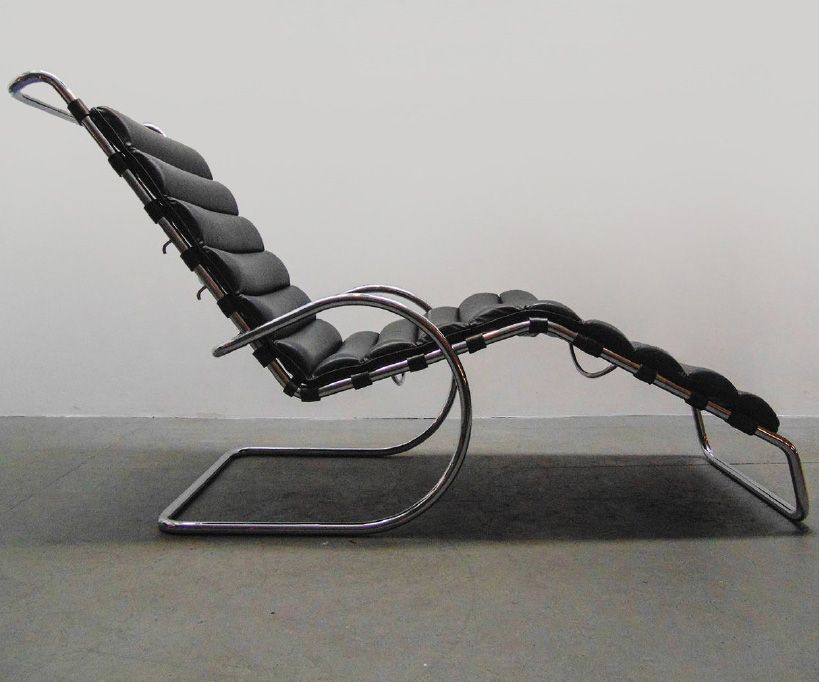 Introduced the same year as his MR-20 Weissenhof cantilever chair, Mies van der Rohe took his inspiration of the Thonet rocker even further with the MR Chaise. 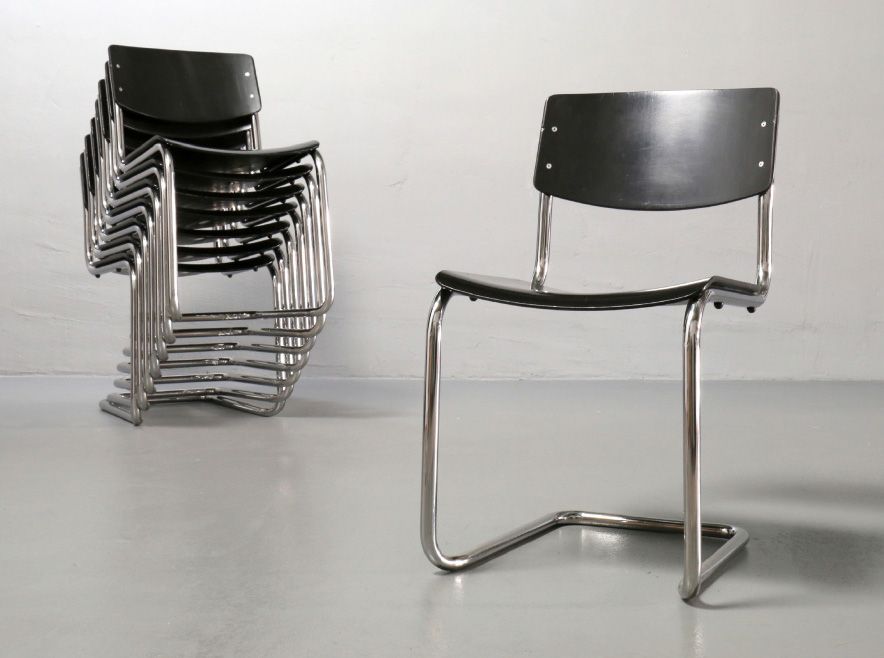 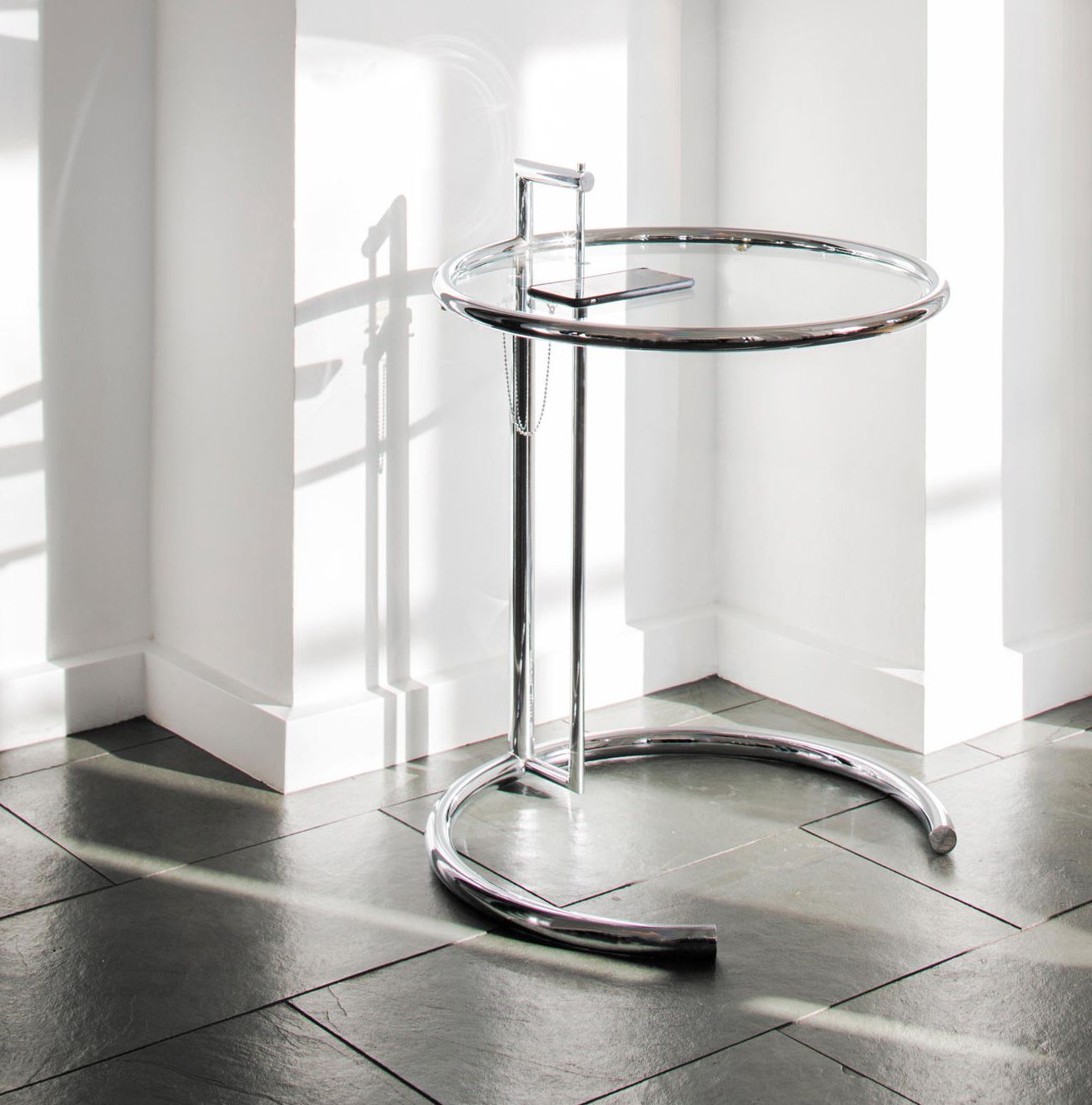 Gray Steel. Eileen Gray’s Adjustable Table E.1027 features a cantilevered circular glass tabletop hemmed in with a ring of tubular steel. It was designed for her similarly cantilevered Villa E.1027 in the south of France. 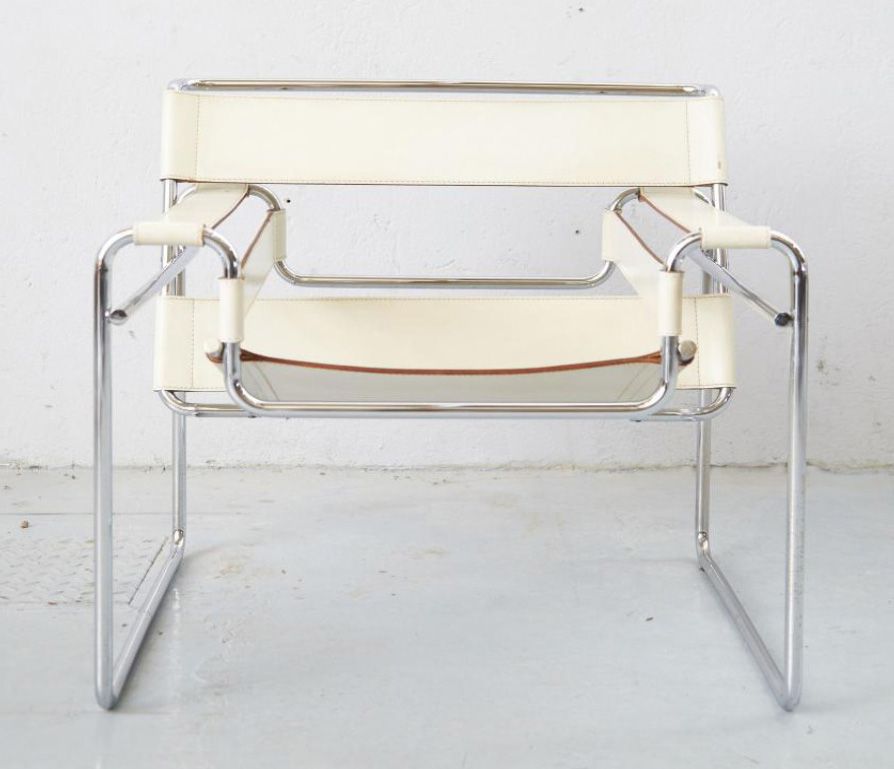 Part of the club. Breuer’s 1928 Wassily Chair strips the club chair to its basics, using tubular steel as both superstructure as well as a gestural device to re-draw its parameters, planes, and lines in his own imagination. 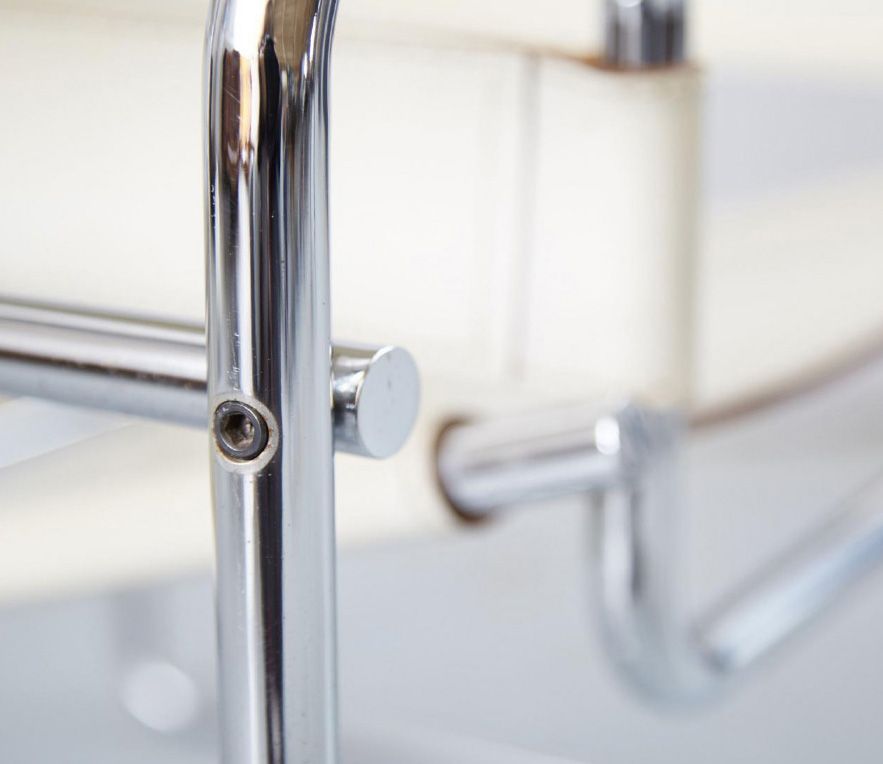 Tubular steel’s hollow form allows for greater structural support and the ability to spirit it into more complex arrangements, seen here in the Wassily Chair. 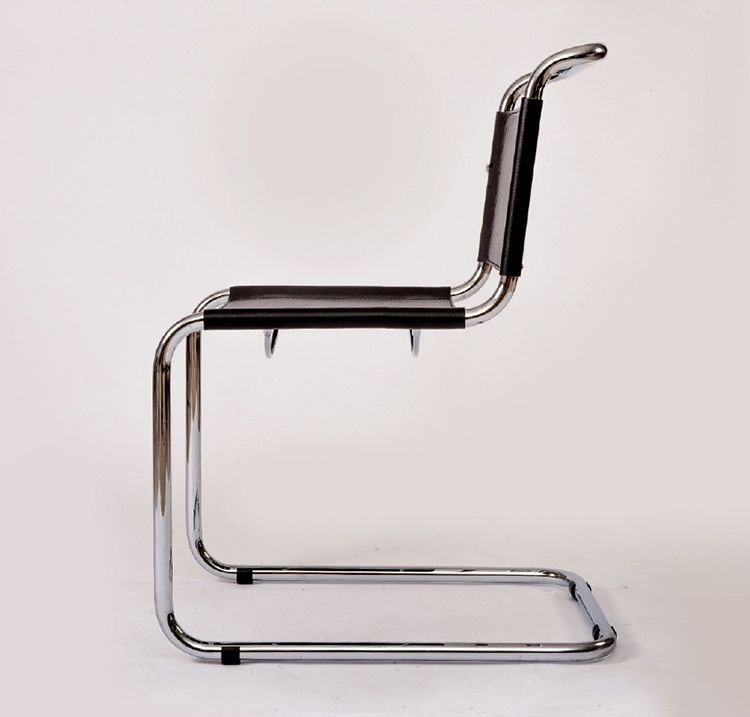 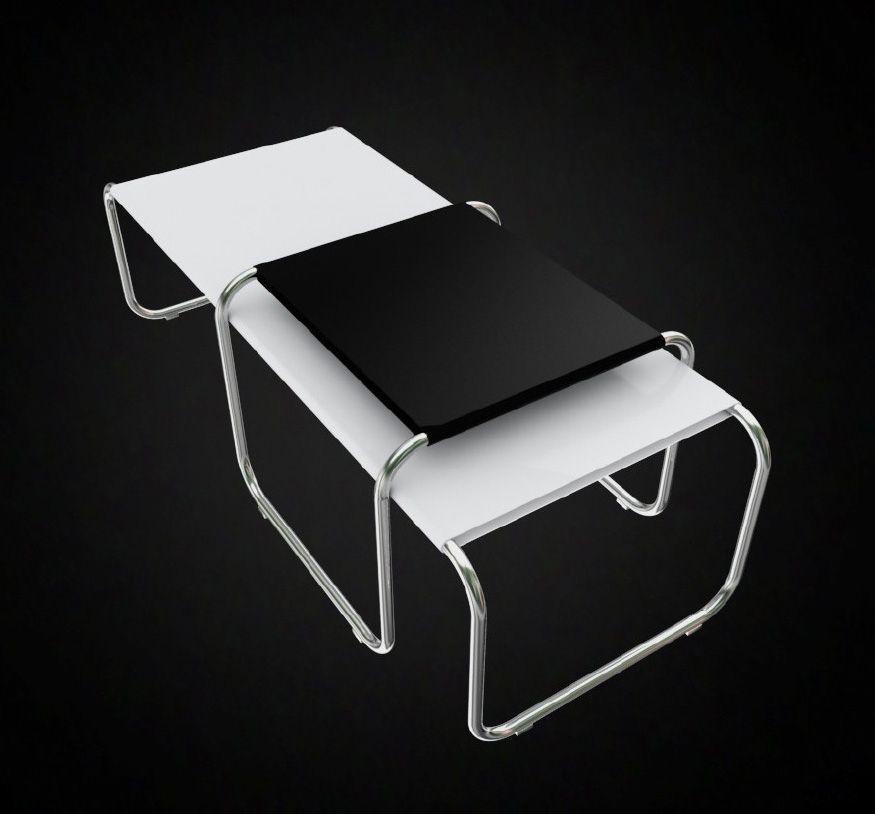