It turns out that 19th-century Vienna was going through a lot of the same cultural insecurities we face three centuries later. Today, doomsday environmental forecasts and strident political hyperbole strike a fatalist tenor in the zeitgeist. Artists, designers, creators, and philosophers are speculating, with apprehension: What’s next? Similarly, in 1880s Vienna, artist groups challenged cultural authority with names like “Joyful Apocalypse” or “End of the World Experiment,” celebrating the death of the aimless Austro-Hungarian bloc and the antiquation of its empirical colonialism. Concurrently, a changing order was taking place in the arts, which included the applied arts and design, but, surprisingly, it would privilege an inward return to craft in the face of the western world’s flirtation with industrialism. This stock-taking generated rich material experiments within the Wiener Werkstätte, a group of skilled designers and artisans, that made lasting impressions on both formal and functional elements of design. In particular, the weaving of cane to create wicker furniture, reimagined and evolved a century-old skill in Germany and Austria and, in the hands of Wiener Werkstätte artisans, exemplified their ideal of a Gesamtkunstwerk, or a synthesized art.

The Wiener Werkstätte evolved from Gustav Klimt’s Vienna Secession movement, which advocated for cultural renewal born from a ver sacrum or “sacred spring.” Secessionists broke away from the established Viennese Kunstlergenossenschaft artists collaborative to found an alliance based on, among other values, a democratic accessibility of the arts and crafts and a rejection of superfluous ornamentation. The first issue of the Secessionist publication, Ver Sacrum, claimed: “We know no distinction between ‘high art’ and ‘handicraft’.” Art therefore, had little disciplinary distinction from design or applied arts. The two were codependent within total environments that performed the ideals shared by the Secessionists and the designers of the Wiener Werkstätte.

Designers Josef Hoffmann and Koloman Moser officially founded the Wiener Werkstätte in 1903 when they secured a listing in the Vienna Trade Register. They established what could be considered a progenitor to today’s co-working spaces: a large workshop that contained areas for metalwork, gold- and silverwork, bookbinding, leatherwork, joinery, laquerwork, an exhibition hall, and Hoffman’s own architectural offices. The work program of the Wiener Werkstätte explained what was at stake in the universe of applied arts: “The limitless harm done in the arts and crafts field by low-quality mass production on the one hand and by the unthinking imitation of old styles on the other is affecting the whole world like some gigantic flood.” The manifesto goes on to describe the place the workshop occupied within the industry and at its heart, it eschewed the frivolous decoration of the Art Nouveau: “Where appropriate, we shall try to be decorative, but without compulsion and not at any price.”

The Wiener Werkstätte exemplified the concentration and rigor necessary for mastering craft and an understanding of material through its physical program of interdependent workshops. Although there was no space dedicated to wicker, the material was prevalent in their designs as well as the European avant-garde at large. According to historian Pat Kirkham, the term “wicker” was used to describe both furniture made from woven willow, a craft which originates in ancient times, as well as furniture made from the more hearty cane derived from rattan palms. The term Korbmöbel, or “basket furniture” referenced the craft of basket making, which the German government sponsored in the early- to mid-19th century as a money-generating occupation during the wintertime months, but the practice also became commonplace within the English Arts & Crafts movement.

Although some of cane’s first applications in furniture can be traced to the 17th century, it became more fashionable in the late 19th, according to Kirkham. Thonet’s Model No. 14 helped usher in this popularity. Designed in 1859 by Michael Thonet, No. 14 soon became ubiquitous in Western European cafes, known for its durability and affordability – the entire chair is made from only six bent wood pieces, 10 screws, and two nuts. A version with a woven cane seat allowed for spilt liquid to drain through, but also provided a membranous give that allowed for comfort greater than a rigid wood seat.

In contrast to the svelte No. 14, a majority of wicker furniture on the market during the late 19th century was hulking and opaque. Designs coming from the Deutscher Werkbund and from England were often structurally composed entirely of woven cane or willow. Peter Behrens’ popular barrel-shaped “Canton” wicker chair of 1876 exemplified this trend. Its circular base was made of wrapped wicker anchoring an overall cylindrical drum form netted together with wicker openwork leaving open a circular seat with a semi-circular back, also made of woven wicker.

Perhaps taking cues from Thonet’s No. 14, Hans Vollmer, one of Hoffmann’s students, experimented with combining the warp and weft of woven wicker with other materials such as leather and wood frames. His furniture designed for Prag-Rudniker Korbfabrikation, a Czech and Polish manufacturer of furniture, departed from the likes of Behrens. Vollmer’s Model No. 569 armchair designed in 1902 for Prag-Rudniker, is made from a cane seat and elm armature in a geometric program aligned with the ideals of the Wiener Werkstätte.

Central to the design group’s philosophy was a belief that the interior and exterior of a space should be conceived as a holistic, expressive statement – an experiential theatre. Purkersdorf Sanitorium, designed by Hoffmann in 1904-05, exemplified this idea of Gesamtkunstwerk. Hoffmann extended the cubic massing of his building throughout the space via a program of geometric repetition – squares and cubes appear in window latticework, wall reliefs, tilework, adjacent gardens, and, famously in the woven black-and-white varnish checkered cane seats of Koloman Moser’s “Purkersdorf” chair, originally unveiled at Klimt’s first Secession exhibition in 1903. The geometric pattern blended with the cubic environment devised by Hoffmann. Here, and in Vollmer’s furniture that synthesized formal and structural conceits with experiments in multiple materials, cane acted as a membrane that unified disparate design objects and elements suspended in the elaborate Gesamtkunstwerk of the Wiener Werkstätte.

Cane’s influence extended intermittently throughout the decades of the 20th century. Just as Vollmer fused cane with other materials like bentwood and leather, Marcel Breuer married the material with tubular steel in 1928 to create the Cesca Chair, which featured a woven cane seat and back. The Cesca Chair’s slick chrome steel tubing exemplified the Bauhaus era’s preoccupation with industry and it dynamically contrasted with the cane handiwork. In the 1950s, Pierre Jeanneret used the material in both his Kangaroo reclining chair and armchair famously designed for Le Corbusier’s Chandigargh Palace of Assembly in India. Here, cane assumed a functional role in allowing the sitter adequate breathability in the humid Indian heat. Cane’s breathability also inspired Swedish leather-maker Palmgrens to design a summer handbag using the material in 1950. After almost 70 years, the design is still in production.

The Cesca came back on the scene towards the end of the 20th century. The chair was, famously, never patented, leaving it open to production by a number of manufacturers. In 1968, Knoll bought the factory where the Cesca was originally made and continued to produce the chair. With Knoll putting both marketing and production energy behind the Cesca, it regained popularity, as did cane, during the 1970s. Danish designer Poul Kjærholm used steam-bent ash to create a looping chair with a cane seat in his playful and optimistic PK-15 designed in 1978 and produced by PP Møbler. And American designer Ward Bennett used cane to wrap the sitter in a version of his Landmark Chair, designed for Brickell in 1970. With cane ascendant once again, one could perhaps hope for a Wiener Werkstätte revival. 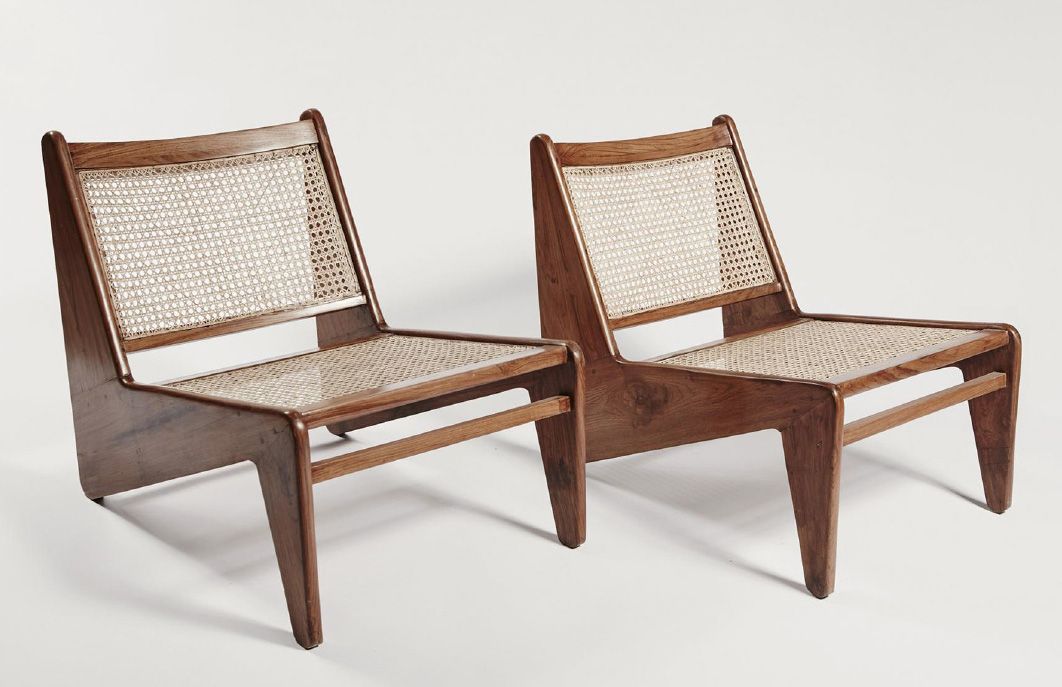 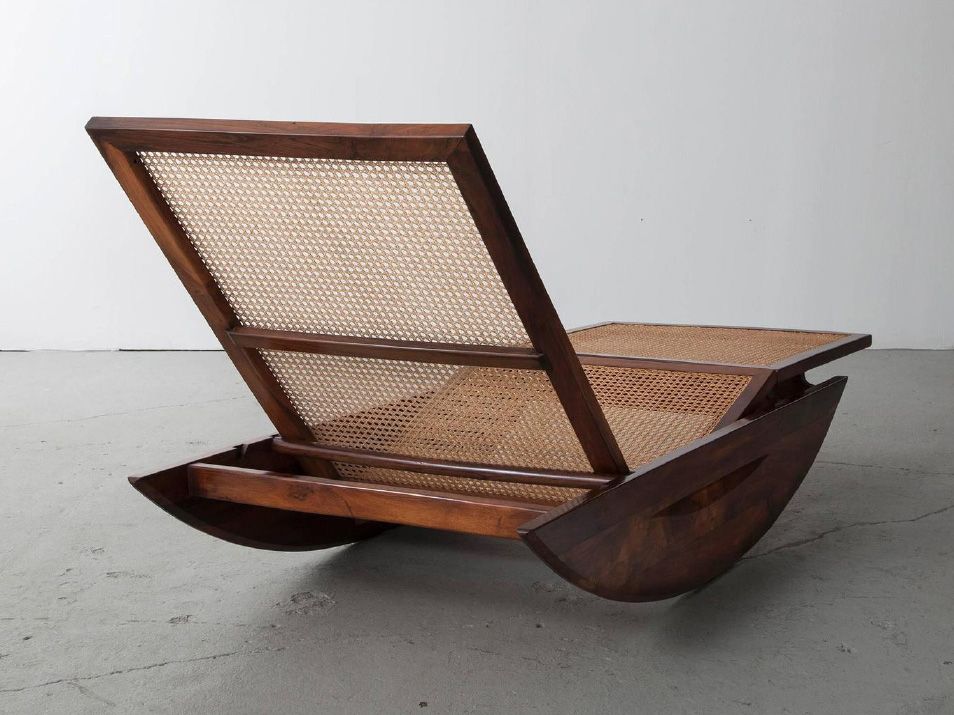 Joaquim Tenreiro designed the rocking chaise longue with jacaranda and a woven cane seat in the late 1940s. 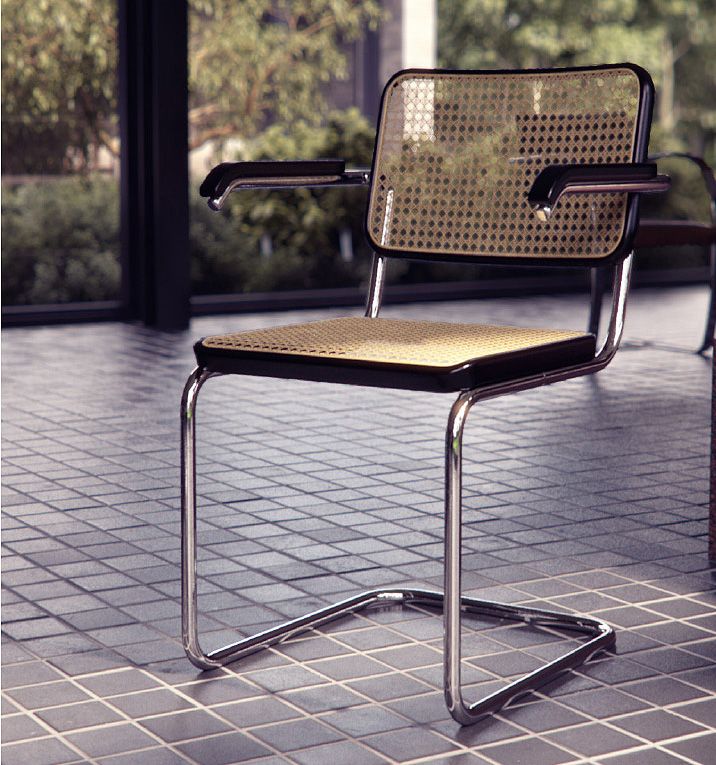 Marcel Breuer combined the technological advancements of tubular steel with the handicraft of woven cane in the Cesca Chair introduced in 1928. 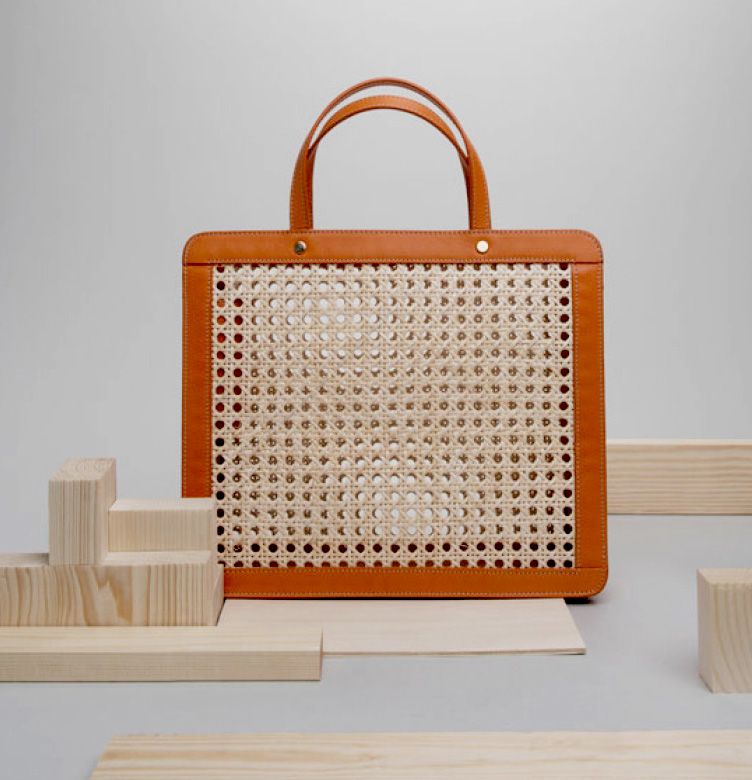 Designed in 1950 to celebrate Sweden’s summertime, the Palmgrens rattan bag is still in production today. 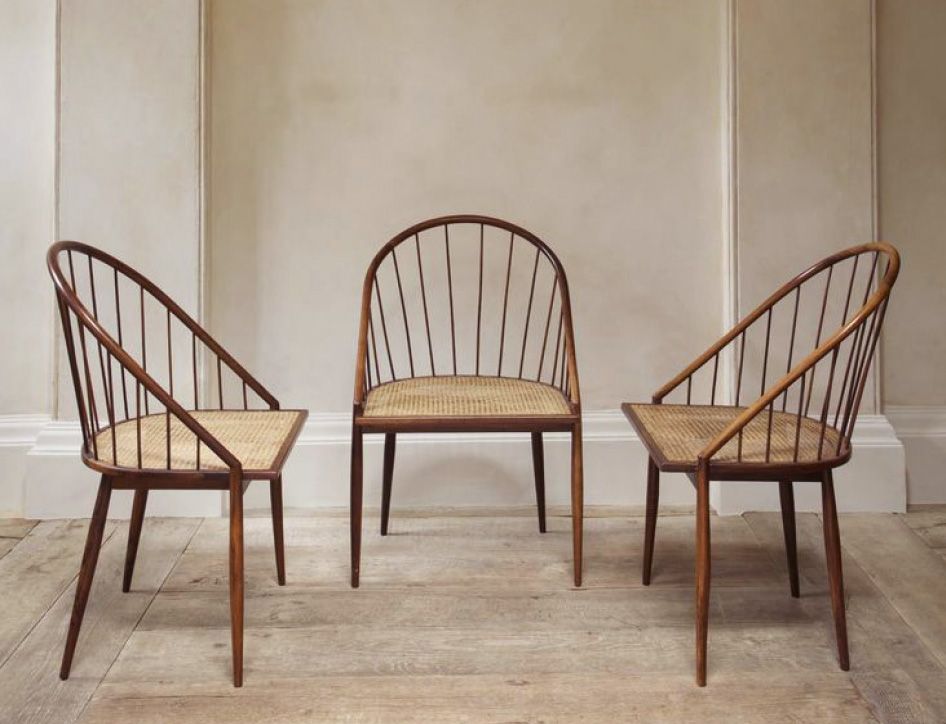 The son of a Portuguese woodworker, Joaquim Tenreiro designed and manufactured this spindle-backed chair in 1960. 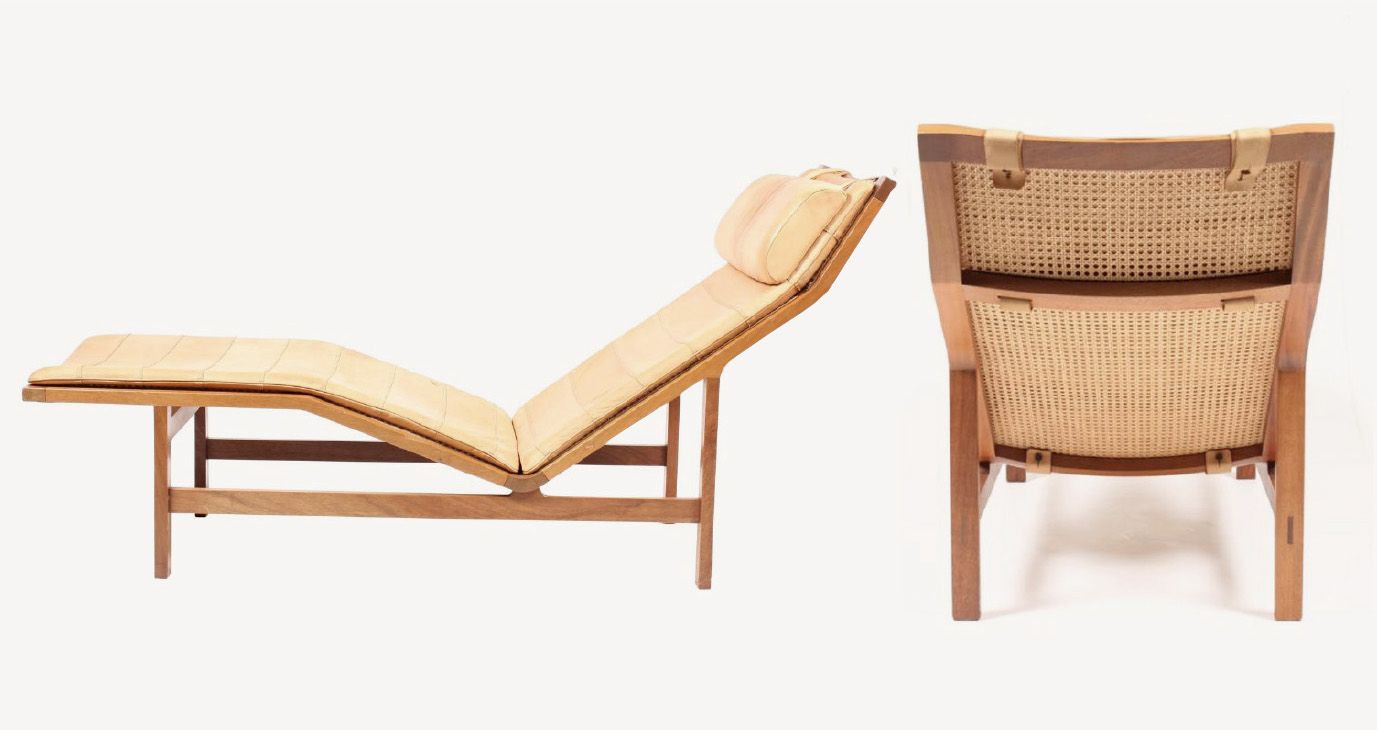 This mahogany chaise longue with woven cane was designed in 1984 by Danish design stalwarts Rud Thygesen & Johnny Sørensen and manufactured by Botium. 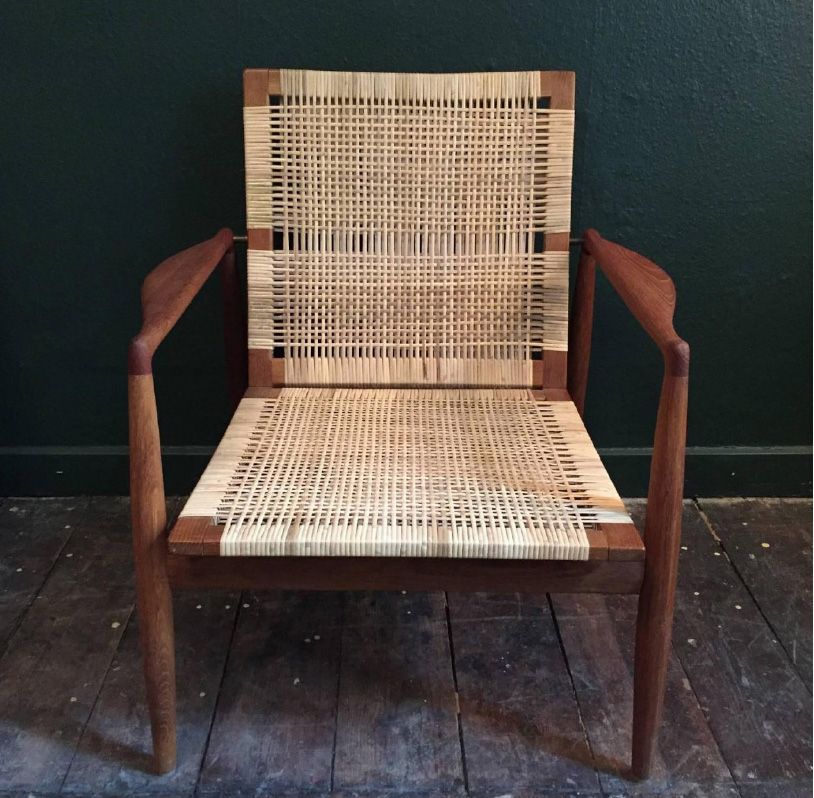 Finn Juhl designed the solid oak and teak SW-96 chair in 1954, which was produced until 1959 by Danish cabinetmaker Soren Willadsen. 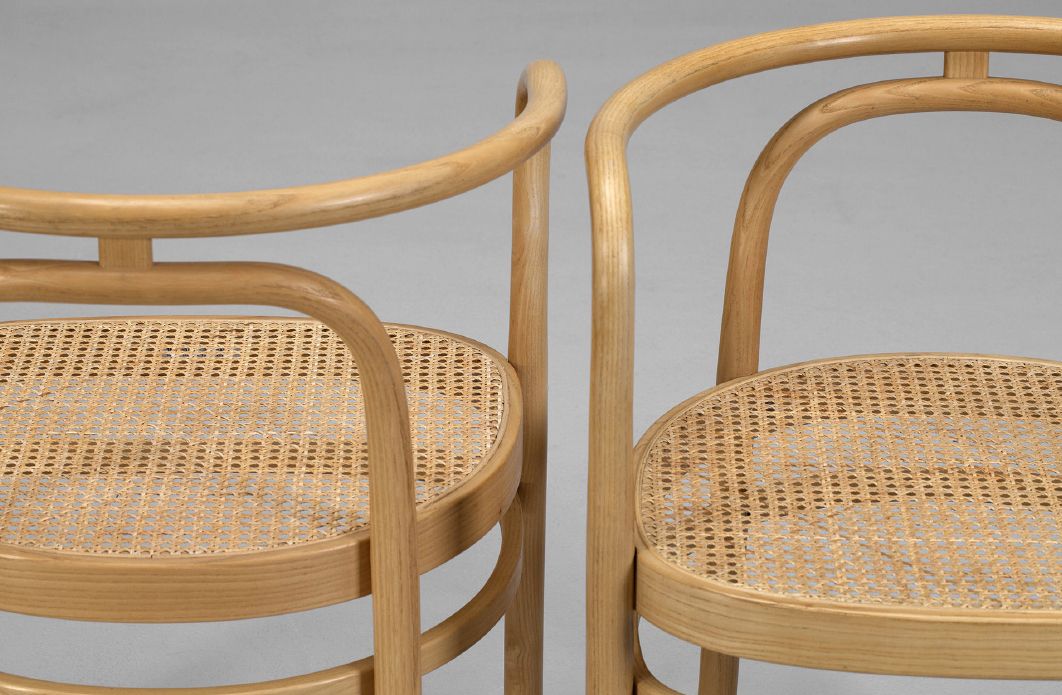 Reunited: bentwood and cane. Poul Kjaerholm designed the The PK-15 chair in 1979 for PP Møbler, Denmark. 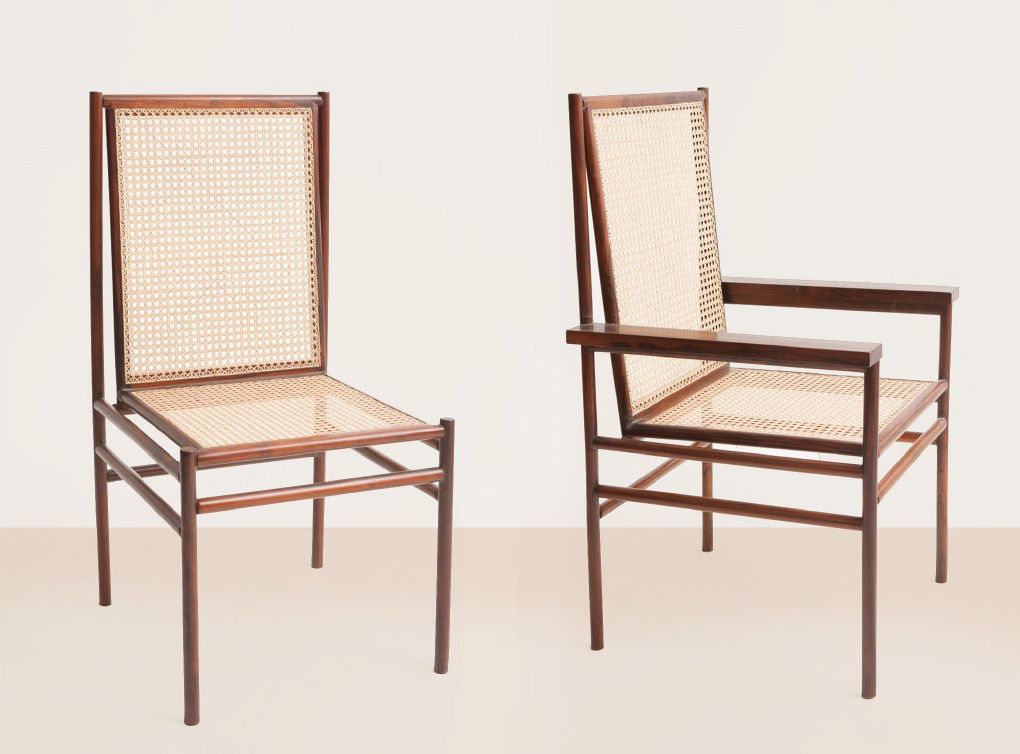 Utilizing Brazilian Jacaranda wood, Joaquim Tenreiro incorporated a cane back and seat in his Estoril Chair designed in the 1960s. 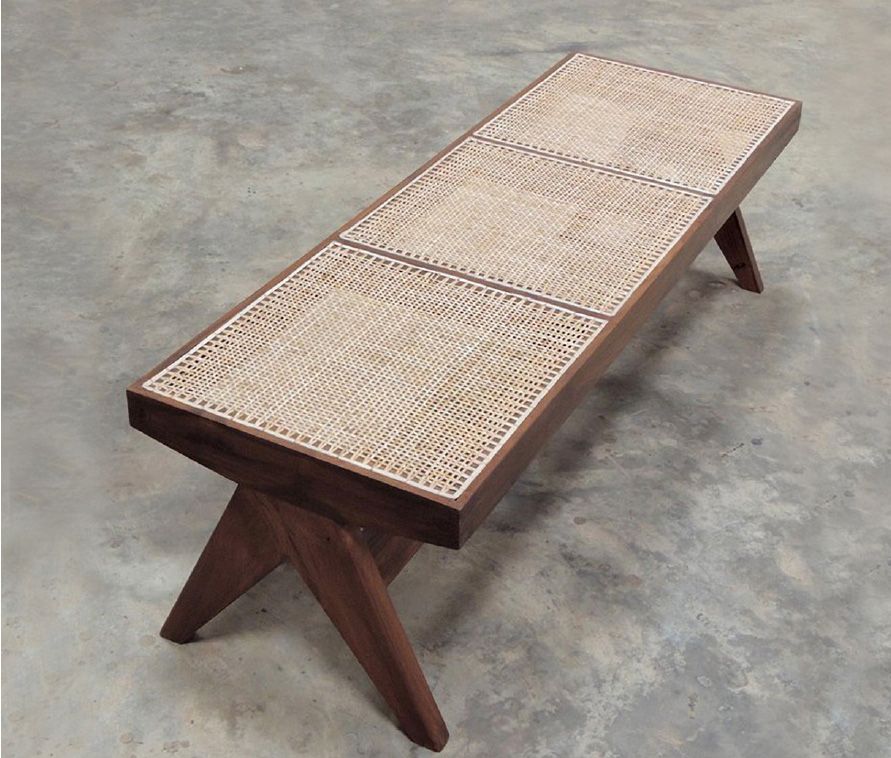 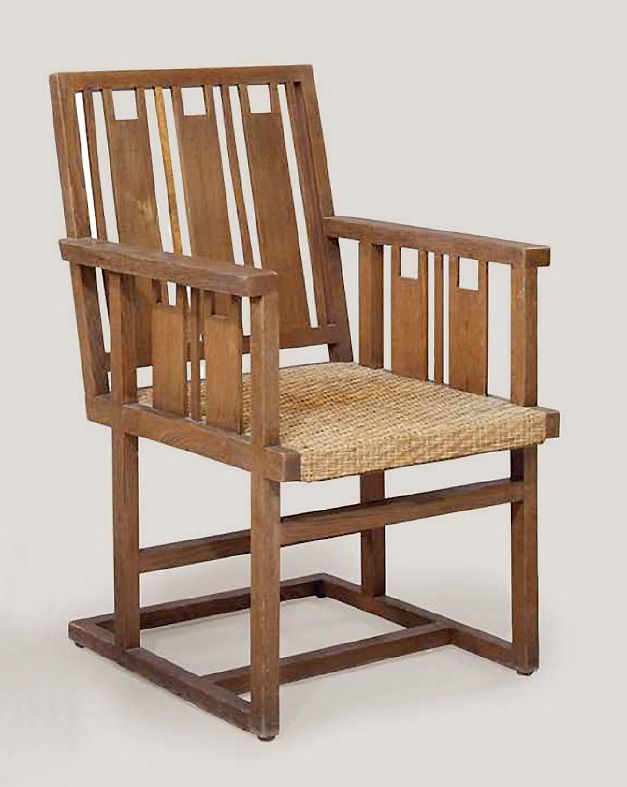 Echoing the geometric tenets of the Wiener Werkstätte, Hans Vollmer combined woven cane with cubic forms in his Model No. 569 armchair designed in 1902 and produced by Prag-Rudniker. 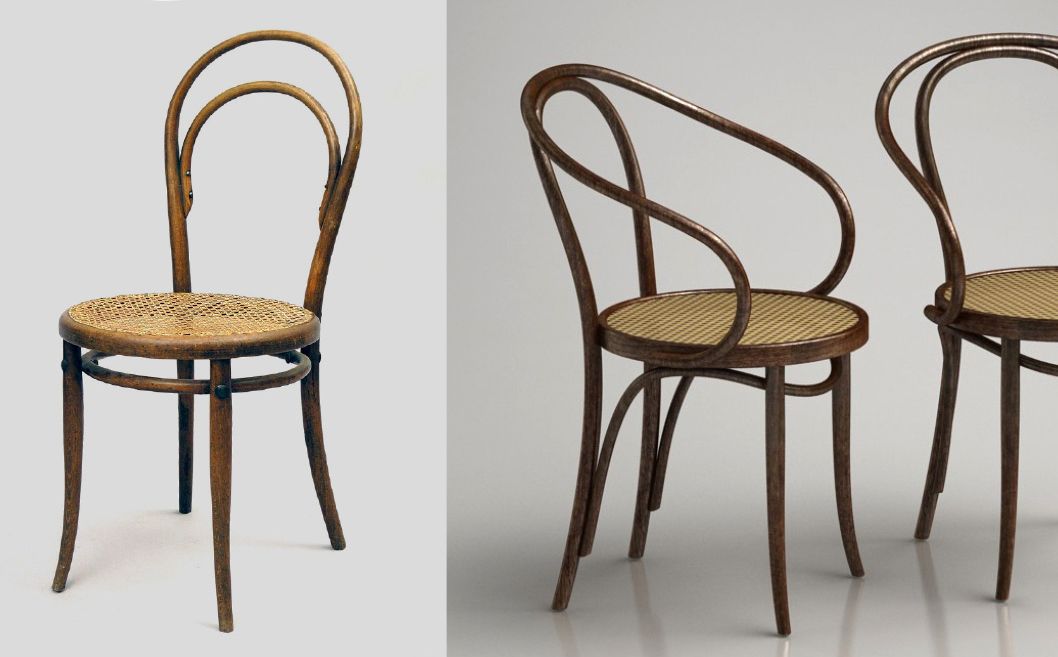 From whence it cane. Early examples of mid-19th century experimentations in cane weaving by Michael Thonet.

LEAD IMAGE
Cane’s radial weave spoke to the influence of geometry in the Wiener Werkstätte and provided clever tensile engineering.