Consider it the thinking man’s marble. Travertine isn’t as flash as Carrara, but it still feels elemental, muscular and hewn. It draws attention to itself with an inherent linear mineral grain, but doesn’t feel showy or precious in the slightest. It was quarried from Tivoli and used in the pillars of the Colosseum in Rome in 70 AD, but the most graphic examples of this limestone conjure up the Modernist masters of the 20th century: at the rebuilt German National Pavilion in Barcelona, Mies van der Rohe’s travertine paving slabs lead you around the predominantly empty spaces as if they are an immersive sculpture, changing minute by minute according to where the customarily sharp shadows of the Catalan day are falling. Mies used the same flooring at his landmark Farnsworth House in Illinois, built at the start of the 1950s. Like the Barcelona building, it is a set of appealing clean volumes, mapped by travertine flooring.

One of travertine’s qualities is its warmth – for architects who favour something stark, the material lacks the chill of, say, polished plaster and tadelakt. David Chipperfield uses it as a constant, from the interior of the Brioni store in Paris that his studio created in 2016 (where its use was an intentional visual reference to Rome and Brioni’s 1940s roots) to the Museo Jumex in Mexico City, which he finished a couple of years earlier. At Jumex he worked with an almost cartoon-like simple architectural silhouette, with a saw-pattern roof inherited from the factory that used to stand here, and the detail left to the travertine cladding. It is minimal but not minimalist. Inside, travertine stairs are lined with black steel to create something graphic – a bold black line leading you up into the gallery spaces. You step from travertine slabs on the plaza outside into travertine channels between floors. Mies van der Rohe was acknowledged by Chipperfield as a key influence here – material as pathway.

Some of the most interesting projects of the last 50 years globally have featured travertine as an integral part of their construction. Rome’s Palazzo della Civiltà Italiana is one of the most celebrated, arguably infamous, examples of the Rationalist Fascist movement. Its roots are in Mussolini’s era, but recently it was bought by Fendi and converted into the fashion brand’s HQ. Nicknamed “the Square Colosseum” by locals, its muscular sqared-off shape and the razor-sharp rows of arches within make it one of the most dramatic buildings in all of Italy – the Roman empire redux.

The Cour et Jardin cultural centre, just outside Nantes, was created by Atelier Fernandez & Serres using brick-shaped panels of travertine. The mosaic effect softens the silhouette, and the material echoes a church nearby. Working in a small town, the architects wanted to create a modern statement but one that didn’t jar with the inhabitants – it couldn’t look like it had just landed from outer space. And travertine can, when handled right, feel familiar as well as visionary. On the other side of the Atlantic, Kimbell Art Museum, designed by Louis Kahn and opened in Fort Worth, Texas, is defined by five vaulted spaces, each end of which is panelled inside and out with travertine. Renzo Piano’s 2013 satellite pavilion is a handsome glass and concrete structure, but it is Kahn’s gently patterned pale surfaces on the original that really captivate. When the same architect’s Salk Institute underwent restoration in 2017, it left the concrete buildings on either side of the travertine plaza gleaming once more. Once again, it felt like the most modern and dynamic set of structures in California, and indeed, as scientist Jonas Salk – who pioneered the polio vaccine – once envisaged: “A facility worthy of a visit by Picasso.” More than that, this feels like a place in which the future is shaped for the human race – the most creative pursuit of all. 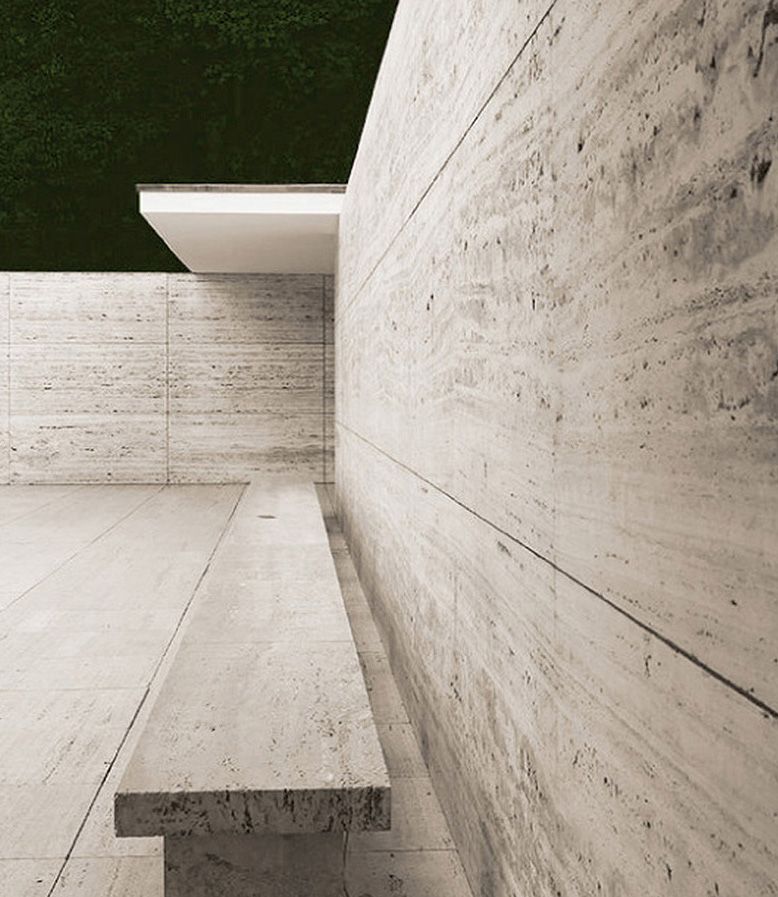 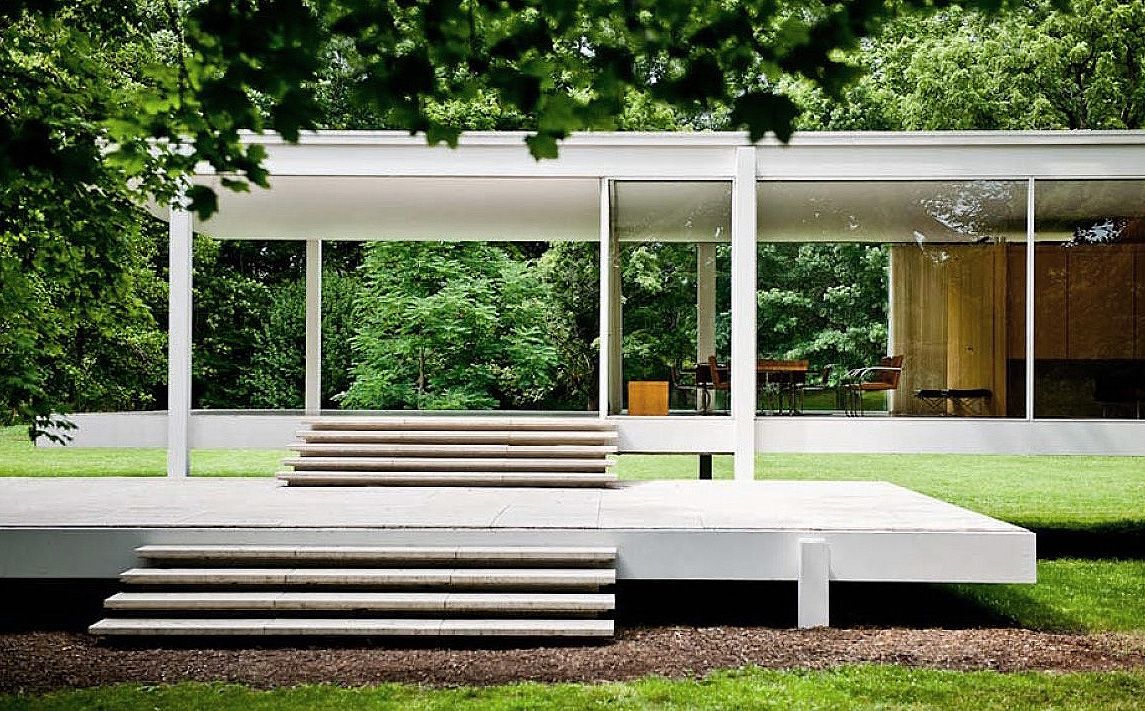 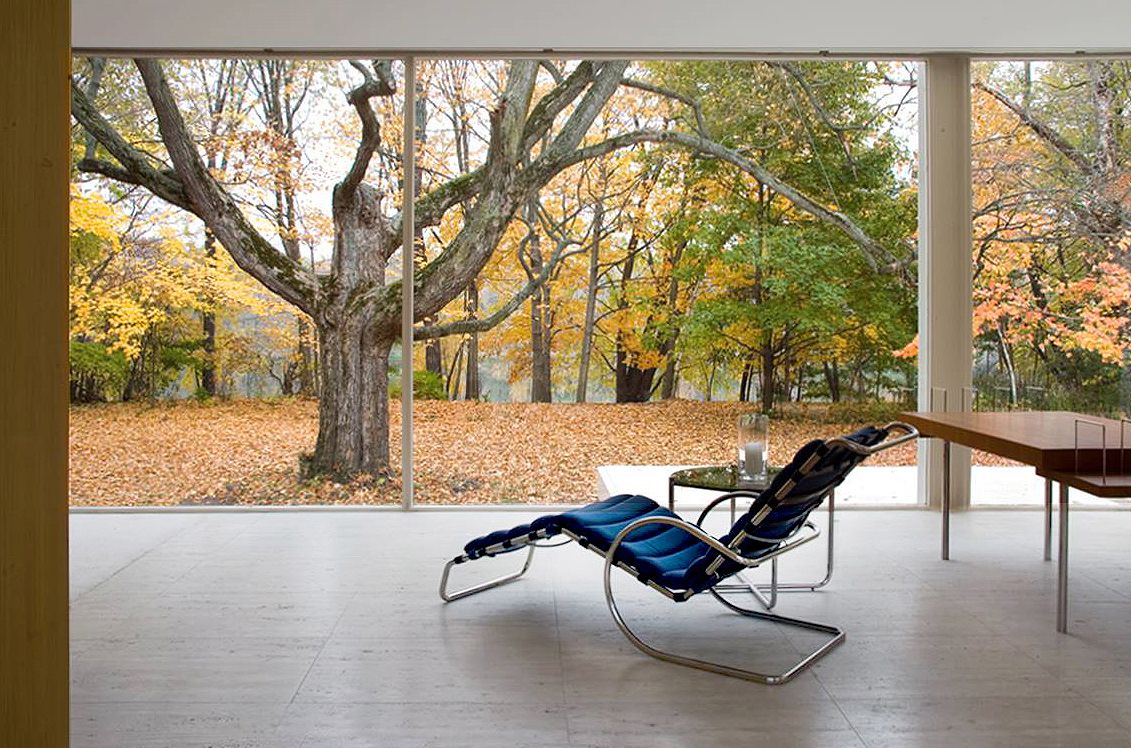 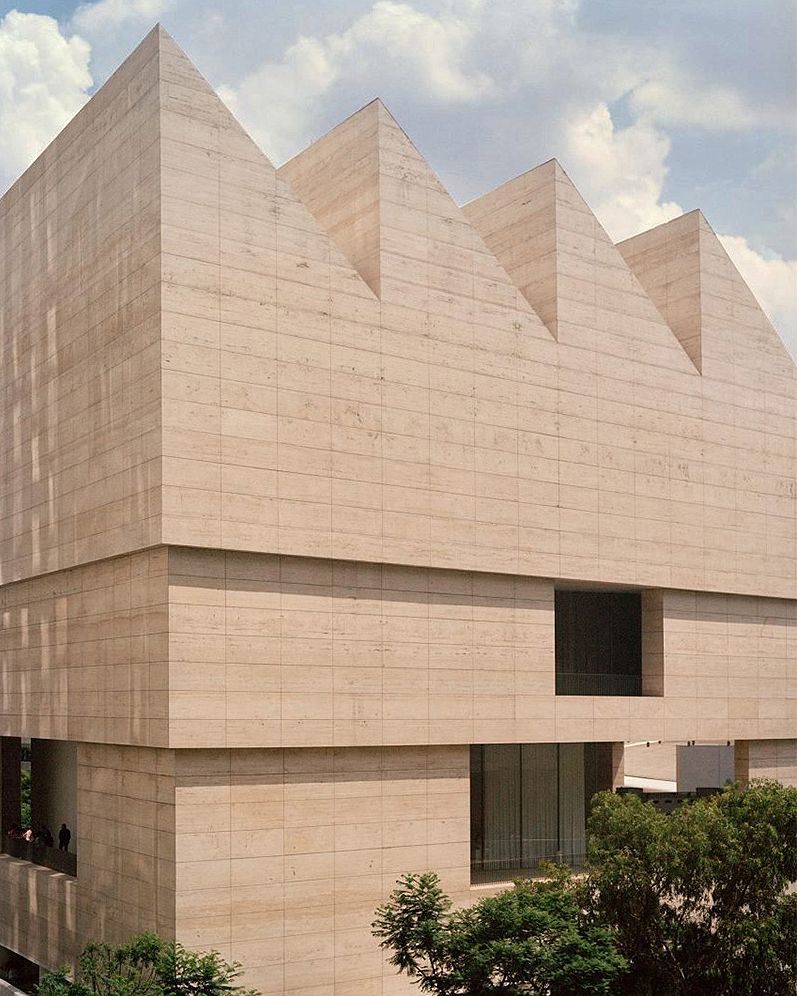 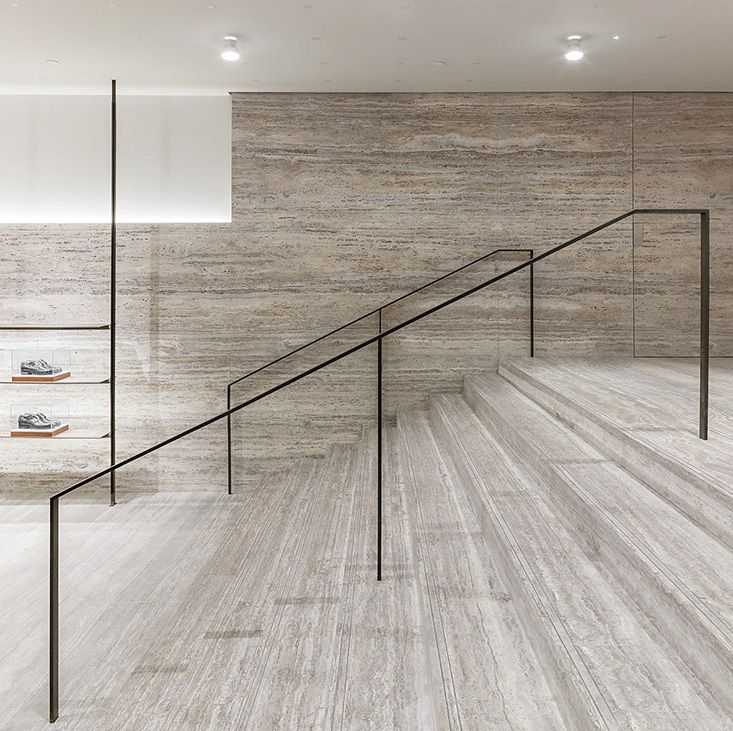 Travertine interior at the Brioni store in Paris by David Chipperfield. 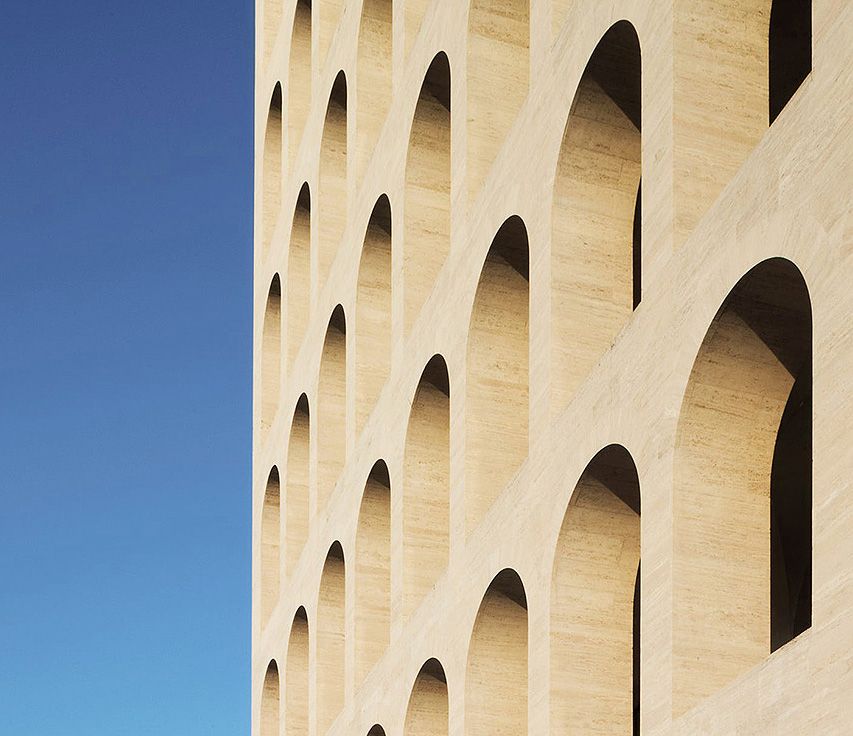 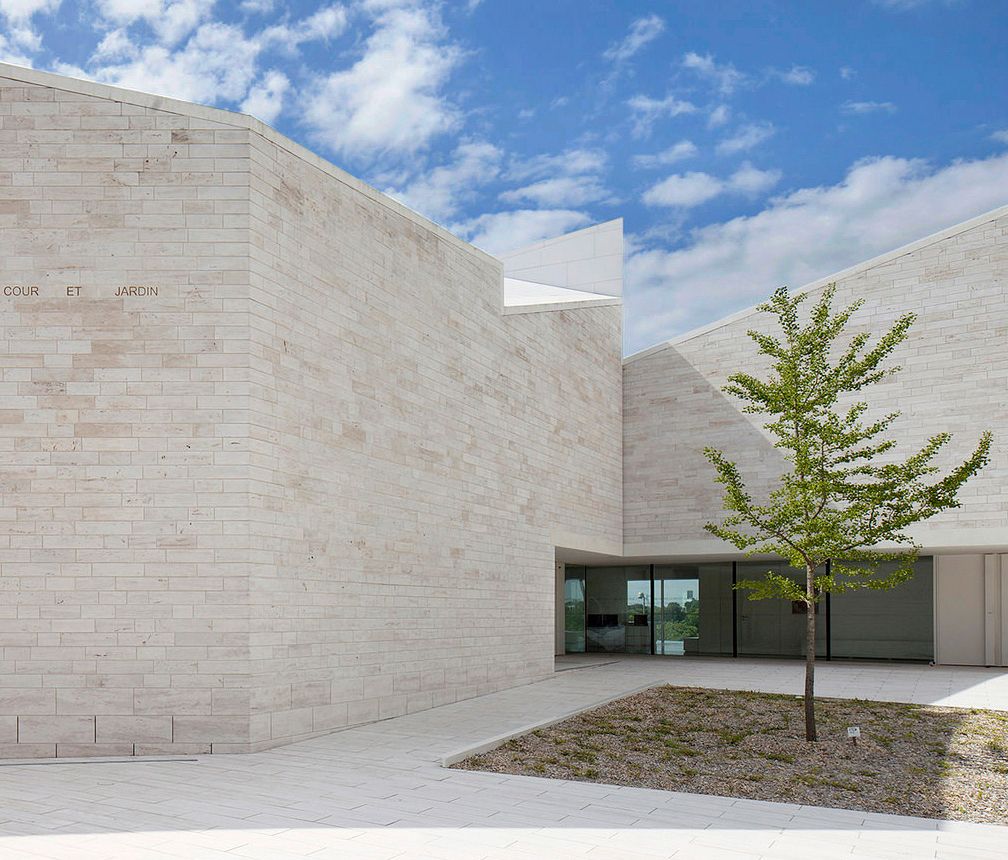 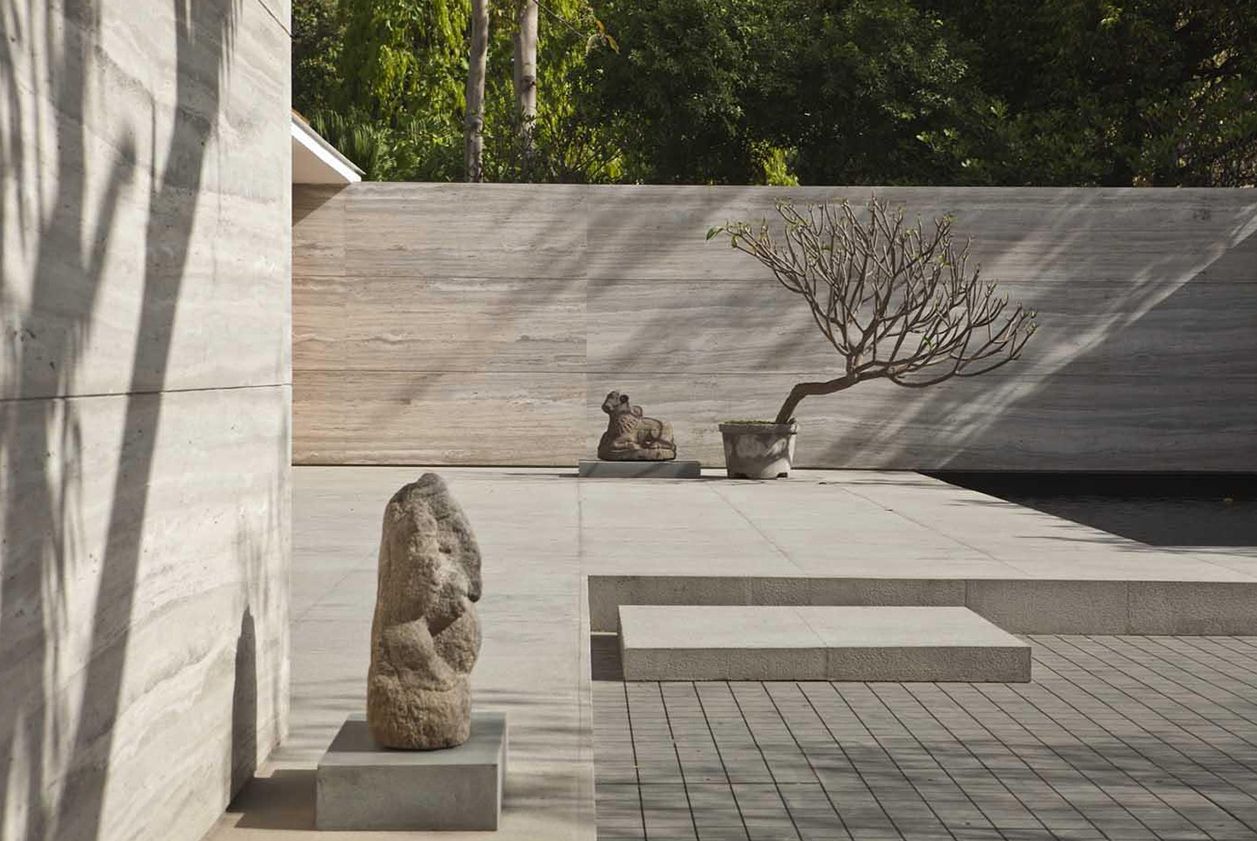 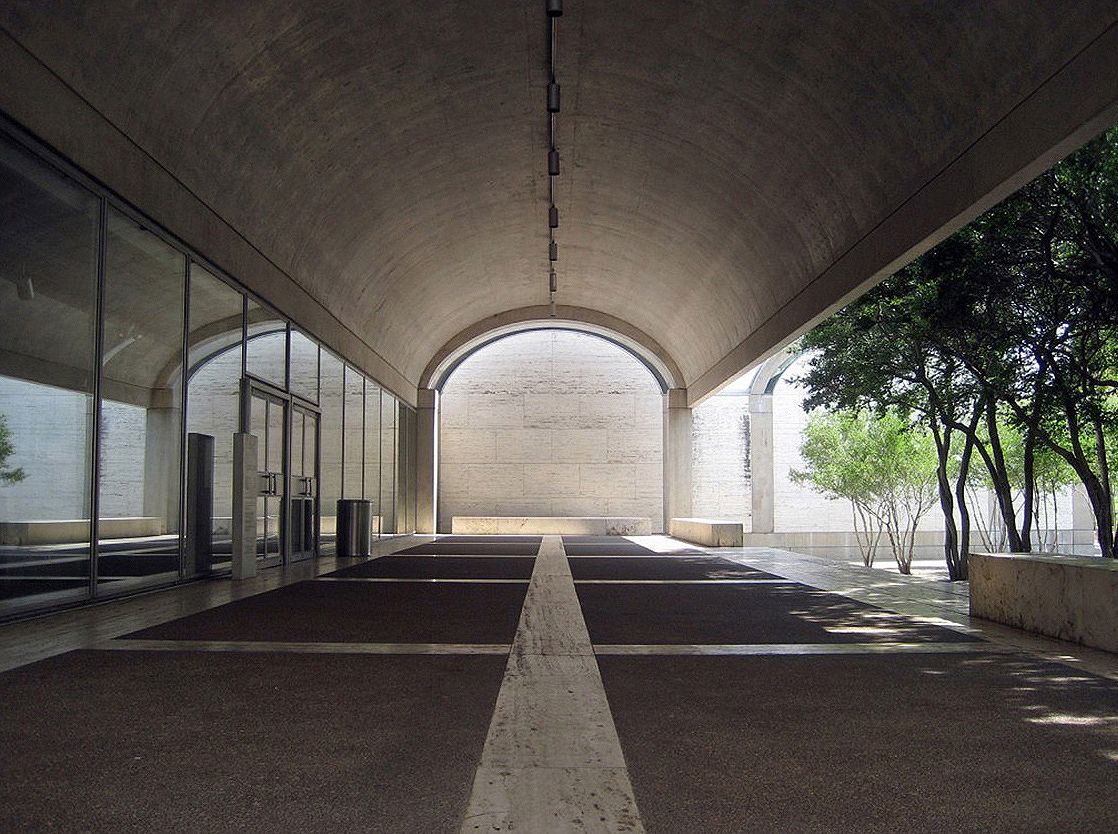 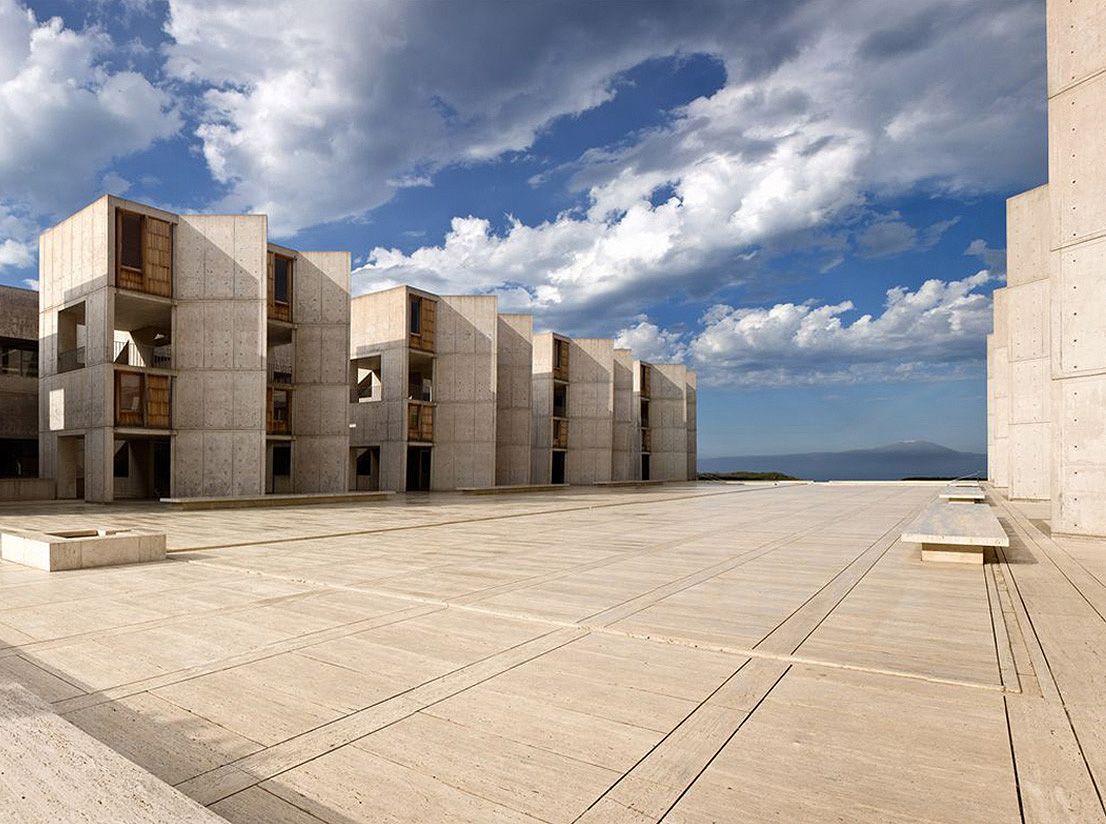