For all its incredible natural wonders, Iceland isn’t blessed with too much in the way of groundbreaking modern architecture. That said, it has an impressive selection of places of worship constructed in the second half of the 20th century. Ragnar Emilsson’s church in the Mosfellsdalur valley, built in the 1960s, is a collage of sharp triangles, as is Hákon Hertervig’s building in Ólafsvík, with an elongated spire, bright white walls and black roofs that pack a powerful punch against a bright blue sky. Theology has been a driving force for design in Iceland – after years of discussion, the Pagan Ásatrú temple in Öskjuhlíð is being constructed to a design by architect Magnús Jensson, using the mathematical Golden Ratio formula in its design to tether it to the natural world.

The most photographed and remarkable place of worship on the island is undoubtedly Hallgrímskirkja, the Lutheran church in Reykjavik. In such a small and low-rise city, it feels like all roads lead to this constantly visible landmark, the second highest building in Iceland after Smáratorg Tower in Kópavogur.

While Hallgrímskirkja opened its doors to its first worshippers in the 1980s, it was actually designed in the 1930s by architect Guðjón Samúelsson who never lived to see it finished. Construction began in the mid 1940s, with lengthy periods of inactivity over the following forty years. Would it, wondered the locals, ever be finished? Samúelsson was the State Architect of Iceland, responsible for the first city plan for Reykjavik in 1927, as well as the University and National Theatre. Both are pleasing modernist buildings with a muscular symmetry. His church, however, is so much more remarkable. As you approach, it looks more like a Soviet monument circa the Cold War Space Race – its spire rises from a staggered set of wings that suggest it is being propelled upwards. Shot with a wide-angle lens from the side or below, it stretches and soars skyward. The façade is so wide, it entirely obscures the main body of the church behind, including the acorn-shaped main altar roof. Samúelsson’s silhouette was a reference to the lava flows of the island, and if you take a walk on the beach at Reynisfjara, you can see the sculptural basalt columns which inspired him.

There is nothing warm about the design of Hallgrímskirkja, and that’s what makes it so beautiful. It is entirely consistent. It is a holistic design. Unlike so many European churches, where a relatively restrained exterior does nothing to hint at the fantasia of stained glass and baroque Stations of the Cross inside, Samúelsson’s building is as glacial, sharp, precise and grey inside as well as out. And for a long time, few people in Iceland appreciated either aspect. Until it became an internationally celebrated tourist attraction, locals largely loathed it, dismissing its reinforced concrete structure as ugly. It has taken time to grow into its looks. Every year it becomes a focal point of the Winter Lights Festival, with artists using it as a dynamically-shaped screen on which to project erupting magma and an assortment of moving futuristic grids and patterns.

Though unmistakably modernist in design, Hallgrímskirkja is a building with its roots in all things neo-gothic. Samúelsson was inspired by Grundtvig’s in Copenhagen, another Lutheran church, built between 1921 and 1927 by Peder Vilhelm Jensen Klint, which took the tropes of architecture from the late 18th century and fed them through a desaturated and simplified filter to create something uniquely Scandinavian and directional. The narrow side windows and the elongated geometry in the vaulted ceiling of Hallgrímskirkja make it particularly pleasing, while the jewel in the crown of this modernist masterpiece is its organ. Designed and built by Johannes Klais, it has something of the science-fiction feel of H.R. Giger, mixed with a touch of aggressive art deco. It is a 25-ton beauty, and when its mechanics are in action and filling the church with sound, it makes the whole space feel suitably celestial. 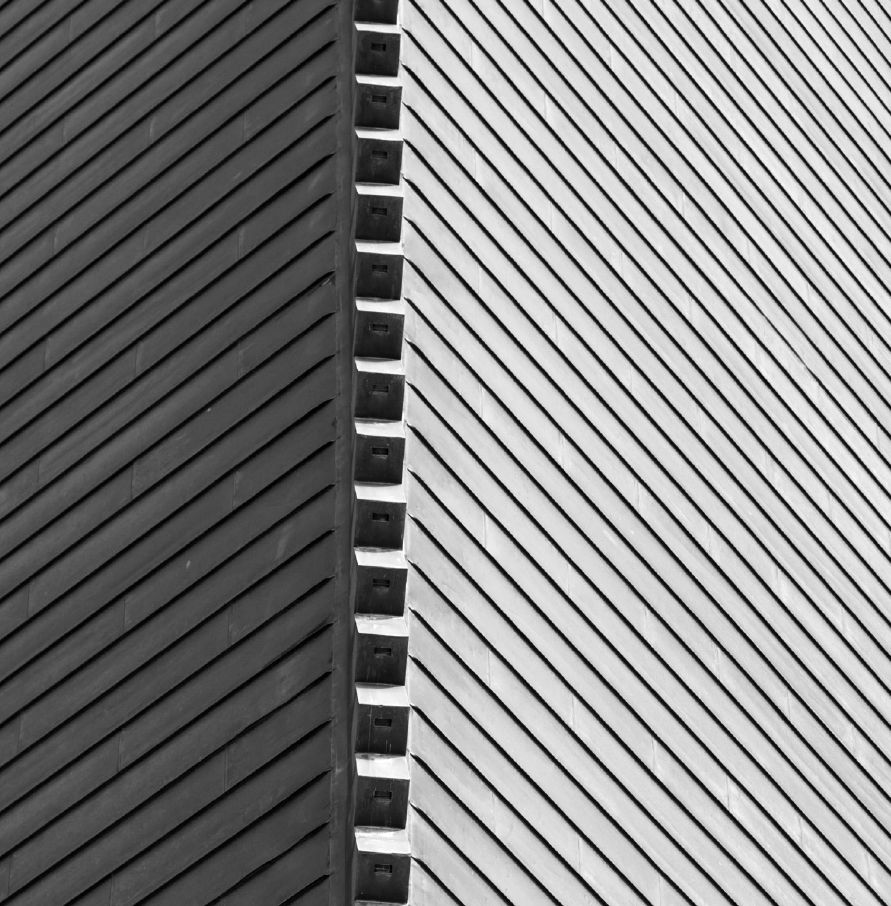 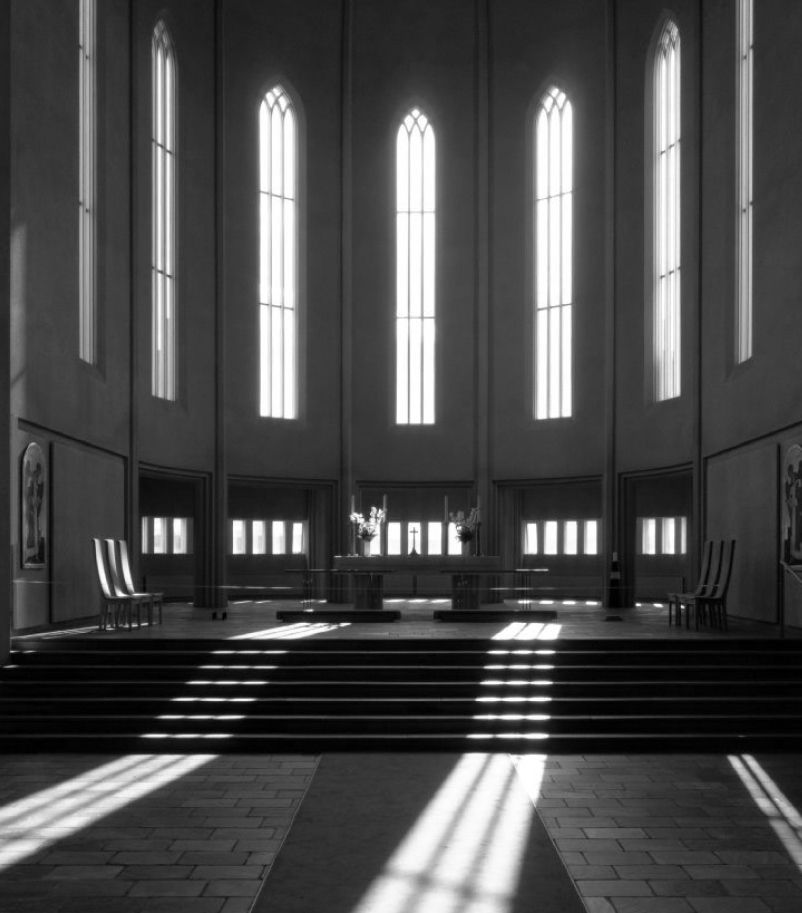 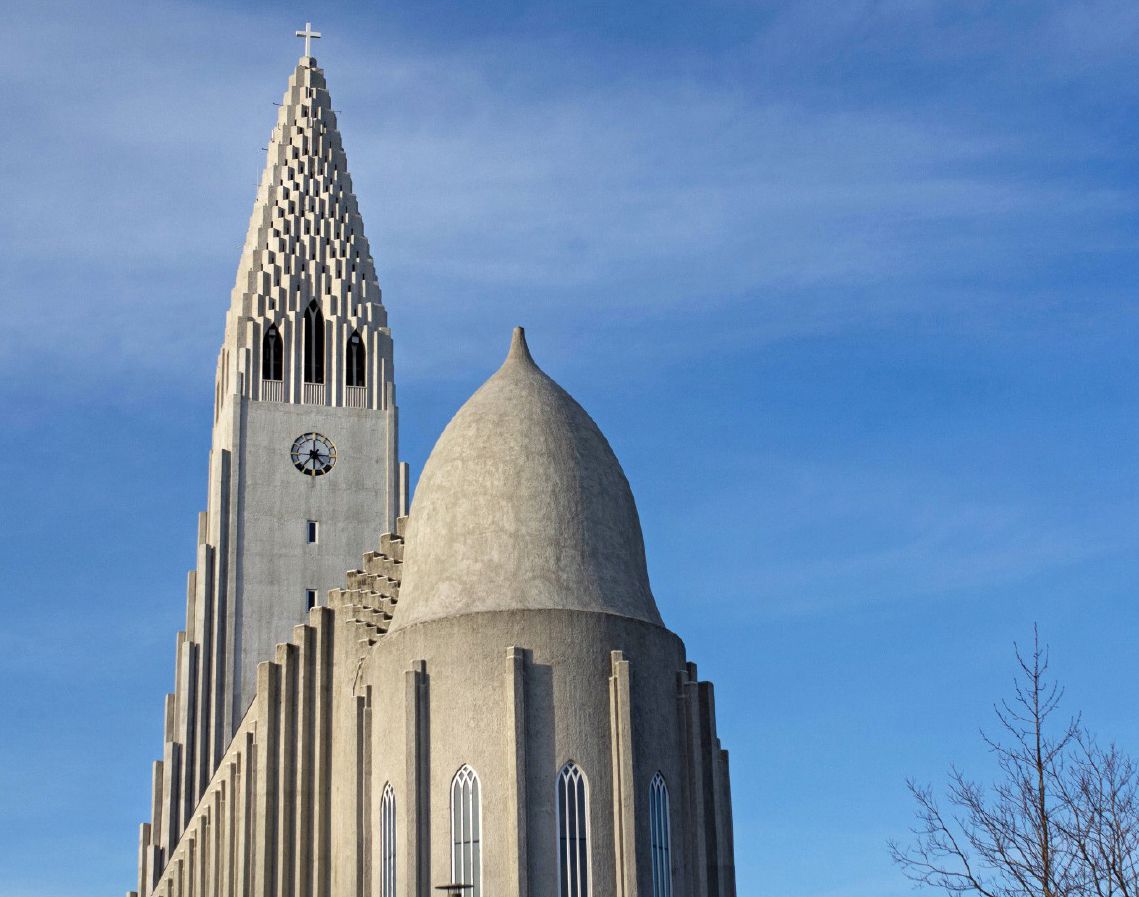 The view and the salvation. 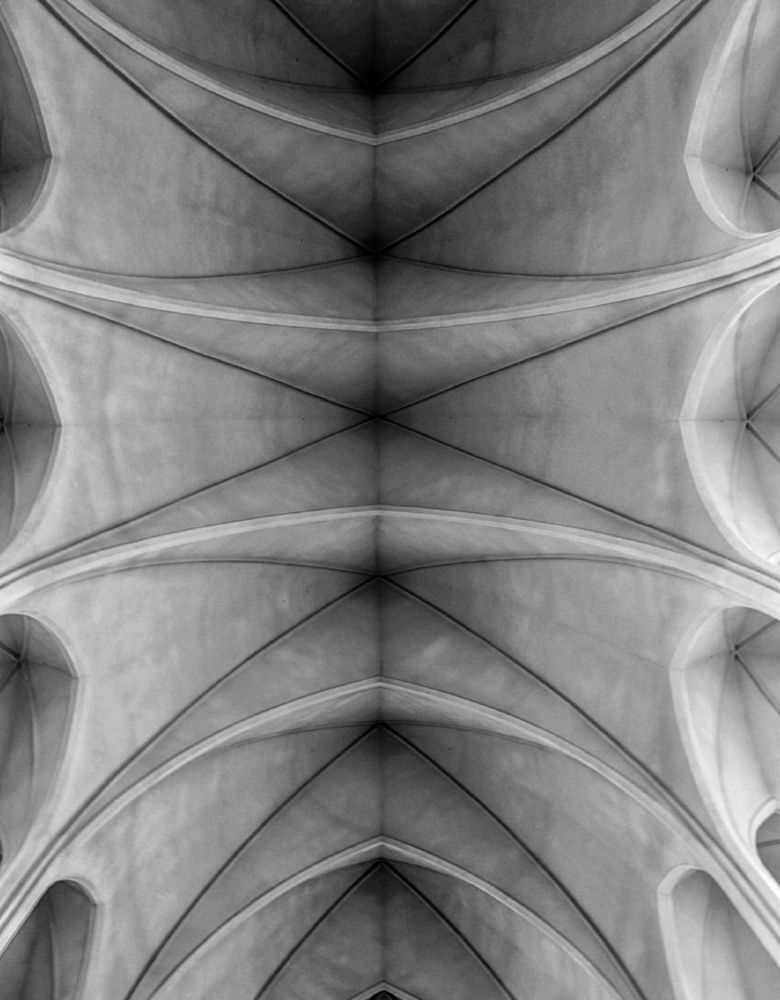 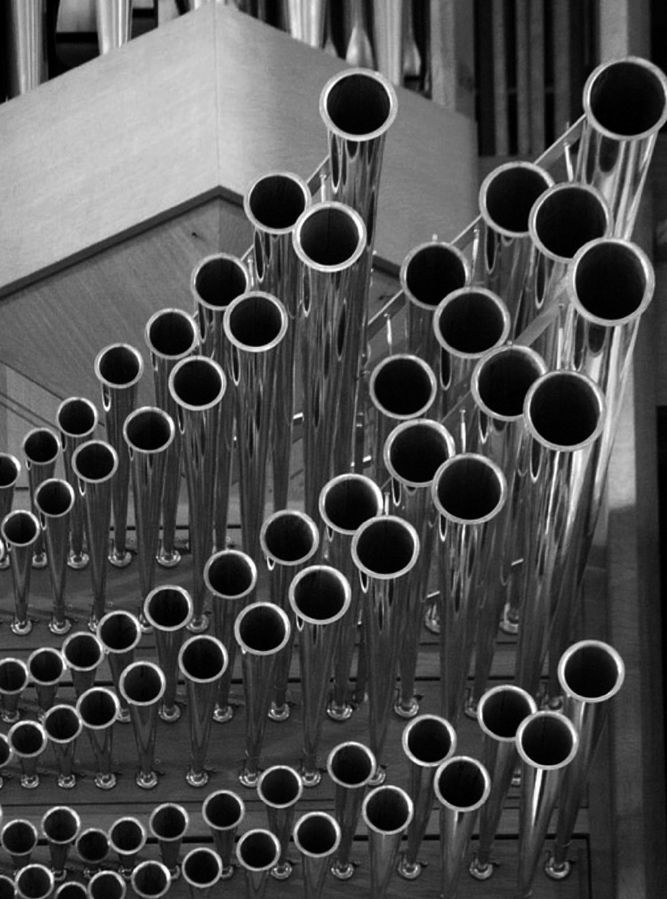 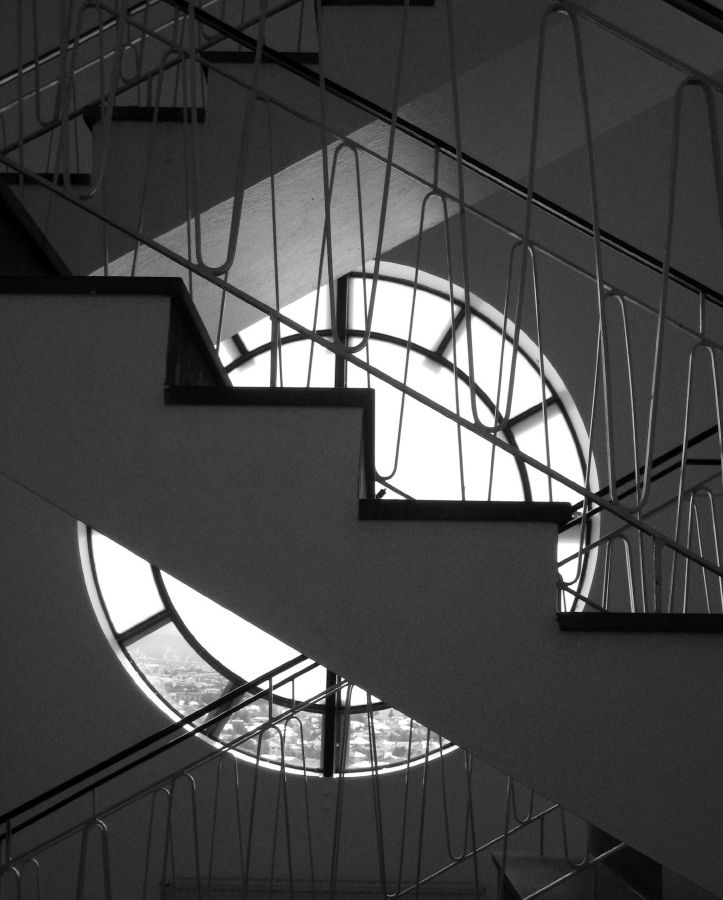 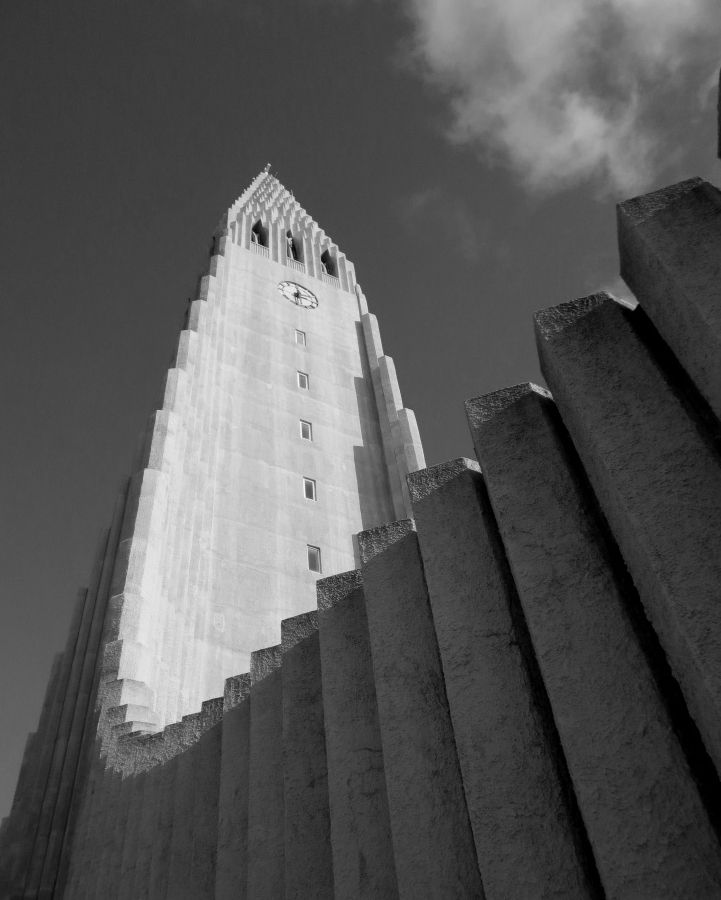 All roads lead to Hallgrímskirkja.